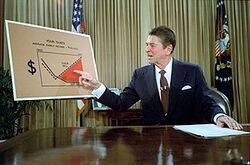 Reagan's twin tools for managing the U.S. economy were the easel and the flip-chart.

Reaganomics is the economic philosophy practiced during the Presidency of Ronald Reagan. It must have been a smashing success, as everyone has nothing but happy memories of it, as of many of the things that happened during that era when everyone had to stay at home because the wall phone might ring with important news.

...of the story is that this phrase was coined by legendary but quirky talk radio speaker Paul Harvey. Good day!

For the religious among us who choose to believe lies, the so-called experts at Wikipedia have an article very remotely related to Reaganomics.

Wikipedia defines Reaganomics as "neoliberal" economics. This has an etymology of its own, "neo" (for "new") implying various nefarious things like warmongering or contempt for the poor. That tawdry on-line rag gives several synonyms, such as:

Whatever the definition, the bottom line is the belief that, if government sprays money at groups that tend to vote Republican, the entire nation benefits. Eventually.

Reaganomics became a veritable state religion, and like Islam, had to have "four pillars". These were:

The four pillars were not quite child sacrifice but were all plenty painful to various people. However, the practice of Reaganomics carried the uplifting hope that the nation would be carried to a land of milk and honey. To some detractors, reducing everything suggested anarchy. In fairness, it was not anarchy but merely a giant step in that direction. The willingness of the nation to make the step owes to the effects of four years of Jimmy Carter.

The first move of Reaganomics was to end price controls and windfall taxes on gasoline. Pundits predicted that making it legal again for gasoline to go up to $1,000 a gallon surely meant that it would do exactly that, and overnight. Instead, oil gushers shot up throughout the United States, including several big ones up and down Manhattan, about which city fathers could do nothing but invite tourists to pitch pennies into them and make a wish.

Reagan promptly proposed to lower the top income tax rate from 70% to 50%, and reduce all tax brackets by 30%. Congress concluded that 30% was dangerous, 25% sounded more reasonable, and it was even more reasonable to spread the change over three years, 10%, 10%, and 5%. The American people uniformly welcomed the passage of this 1991 law by stopping work and waiting for it to be 1994.

Over the rest of Reagan's first term, Congress convinced him to moderate Reaganomics, passing laws to undo one-third of the initial cut, raise payroll taxes, and take away deductions. Democrats still point to the Great Communicator as America's most beloved tax raiser and are constantly striving to govern as Reagan governed.

Reagan reduced spending largely by hiring a hard-ass Budget Director and ambitious Cabinet secretaries. When their budget impasses escalated to the Oval Office, he deftly added their figures, divided by two, and went, "Boys, what do you say we split the difference?" Thus, spending cuts were also less than promised, although good enough. 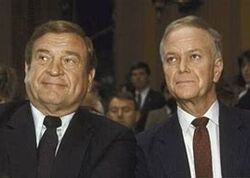 Dan Rostenkowski and Bob Packwood figured out how to write legislation the President would think was excellent...if the President could still think.

In Reagan's second term, the nation encountered an enemy like none before: Reagan's brain. The old man was going senile. The White House staff and press corps concealed this development even more effectively than future staff would hide Bill Clinton's affairs and George W. Bush's entire persona. The Democratic Party assisted, cobbling together the Iran-Contra Affair so that the public could not tell whether the lack of output in the President's final two years was scandal, corruption, or disease.

Remarkably, Reaganomics was practiced most perfectly without Reagan. Congressional leaders cobbled together the Packwood-Rostenkowski bill, which brought income taxes all the way down to 28%. (Those of modest means paid a lower rate of 15% — plus a payroll tax of 13%.) Suddenly taxation was low, simple, and almost painless.

Reagan finished both terms, confessed in a national address that that day was one of his "good days" and you would not want to listen to him on a "bad day", and bid farewell to public life. Reformers Packwood and Rostenkowski were drummed out of Congress in separate personal scandals, and the race was on to stealthily undo Reagan's work and make the tax code burdensome, inscrutable, and something you would hire someone in wing-tip shoes to lobby Congress to change. Every year.