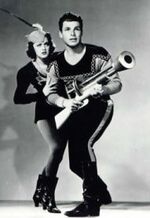 A young couple out shopping, brandishing the medium of exchange in a menacing fashion to scare off Romulans.

Laser-Faire is an economics theory devised a long time ago in a galaxy far, far away by the Dark economist Adam Sith. The theory postulates that all economic relationships must involve lasers in some way, and that invisible hands power the driving Force of economic booms and recessions. The theory is held in wide regard amongst famous academic economists such as Darth Mil. Pzow! Pzow! Zeeeeum! Ka-boom! Aaaahhhh....

Since its inception, Laser-Faire theory has come under constant attack from both the Left and the Right. Libertarians maintain that lasers are best used in private hands, arguing that the poor cost-to-benefit ratio of the Death Star and the awful marksmanship of the Storm Troopers shows that public ownership of laser-capital is leads to inefficienct use. Socialist theorists argue that, over time, lasers tend to become concentrated into a relatively small number of hands, thus increasing social inequality. And, of course, Keynesians argue that the whole theory is quite stupid, and consists of nothing but grown adults who should know better making laser noises, and anyway, why doesn't anyone talk to the Keynesians anymore, do our breaths smell or something?

The great laser-faire economist Gene Roddenberry responded to all of these criticisms together with what he called the Zwwweeeeeeeee - POW! argument which many consider irrefutable. 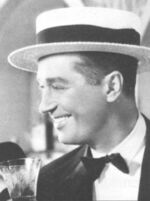 In the 1930s, Maurice Chevalier was France's richest man.

A French economic system based on the principle that an individual's access to both credit and government services should be based upon how much style and panache he or she has. Also known as Supply and Elan, this system was current in France until the introduction of the Euro, a currency so square and unhip that it brought the entire system crashing down into a coolness recession.

A late Nineteenth Century Torontonian theory, which held that the cost of credit could be decreased by abandoning gold as a monetary standard, and replacing it with the herbs parsley, sage, rosemary and thyme (remember: thyme is money). Although never implemented, later economists have called the theory 'pleasant' and 'soothing'.

Known as "less is fair." An economist who never got around to writing a nine hundred-page thesis on economics developed this system, but his idea still lives on to this day. It involves "just going with it" and "stop worrying." This was an extremely effective form of economy in the late 90's as its main tenant was "no rules for anything, ever." The system collapsed with the election of George W Bush who used it just as intended, but perhaps a bit too much.