From Uncyclopedia, the content-free encyclopedia
(Redirected from Libertarian)
Jump to navigation Jump to search 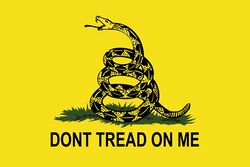 The mascot of libertarianism is the charming rattlesnake.

Libertarianism is believed to have started in early 1884 when founding fathers John Locke and Thomas Jefferson decided to spice up their liberal values in order to impress Ayn Rand with whom they both were in love. When Miss Rand chose to propose to L Ron Hubbard instead, the two gentlemen founded the libertarian principle Anything Goes, lost their marbles and tried to assassinate Mr. Hubbard, an attempt that failed when John Locke sneezed, being allergic to gun powder.

The essence of libertarianism is that control-happy governments should just let citizens take care of themselves like grown-ups. Citizens are more-or-less intelligent and have free will, and so should be capable of making their own decisions through the free use (or non-use) of their dollars. (The old silver certificates only, as Libertarians are going to abolish the Federal Reserve.) Be it world peace or Pepsi, consumers shape the world they want through the goods or services they demand. (At some point, it appears that people started to desire Pepsi more than world peace, though this is obviously not the fault of Pepsi.) This belief has prompted some badass one-liners, such as the slogan "Your rights end where mine begin" and bringing back the "Don't tread on me" Gadsden flag from the Revolutionary War.

Most libertarians believe that politicians of the major parties are fat, ugly fugly vampires who feed by sucking the free spirit out of the backbones of ordinary citizens. Libertarians decry government power merged with corporate power merged with the military-industrial complex. They also decry the spreading police state, endless wars, and bail-outs of rich bankers and investors. Libertarians often meet to "have a good decry." To quote Lysander Spooner, "War is the health of the state," and libertarians are about having the state be atrophied whenever possible. Therefore, ironically, they support the War on the State — which, they assure us, will be launched "any day now."

Examples of the liberties in which libertarians believe are as follows:

For the religious among us who choose to believe lies, the so-called experts at Wikipedia have an article very remotely related to Libertarianism.

Libertarians refuse to believe our leaders are democratically elected (or they would be Democrats, wouldn't they?), nor that the United States is still a Constitutional Republic (or they would be Republicans). This cynicism drives many libertarians toward total escape. This may take several forms:

Classical Liberalism and Libertarianism are often confused by Brits who want to take cheap shots at the foundations of American political philosophy, and who are in denial about history and the happy fact that Americans won their little Revolutionary War and are, duh, winning! Or at least were winning up until the last few decades before the state grew too big and the masses became dumbed-down because state education does not encourage people to think for themselves and be strong willed, free thinking individuals who remember where their country came from in the first place. As such, Brits often partake in a bit of sadistic glee in watching our national downfall unfold.

Classical Liberalism (which is a more pleasant description than Obsolete Liberalism) started as people attempting to free themselves from authority, which at that time meant the British Monarchy. As soon as a new old authority came along in the form of corporations the Federal Reserve (see Rothschilds), Classical Liberals realized that Americans were now going to be wage slaves no matter what economic policies the federal government enacted. People against Authority later changed their name to Libertarians once the idea of big government authoritarianism somehow became synonymous with being "progressive". Why this happened, the classical liberals will probably never know. Later, capitalists Republicans realized that Libertarianism protects the rights of individuals to property ownership and the free market system, though they paid little attention to the civil liberties aspect of libertarianism which is actually far more fundamental to the philosophy than economics. Anti-Authoritarians have since tried to use the word Anarchist to escape the capitalists Republicans finally, but the capitalists Republicans still trying to be one step ahead tried to use Anarcho-Capitialism, though the Libertarians called them out on that move too, and dubbed the term "neo-cons".

To honor the sacred libertarian cause, prog-metal pioneer Neil Peart and famous novelist Ayn Rand's Ghost wrote these immortal lyrics of protest, which have been set to a famously stirring melody (Peart later disavowed libertarianism):

The invisible Hand of Nature will keep
Every business exec and veep
On the straight and narrow, and we all will reap
Peace and plenty when the Libertarians come to town

How to spot a libertarian[edit] 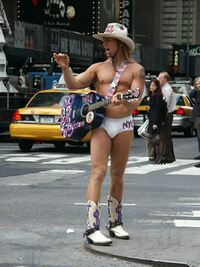 A libertarian in mating season

The typical "modern libertarian" is an anti-government, beer-drinking, crack-smoking, gun-toting, bomb-making, orgy-participating, porn-loving, South Park-watching, straight, male, American "don't fuck with me" motherfucker who lives with his mom and hates the state. Cheap sex, deadly flavors of the evil weed known as pot, and the latest and greatest style of handguns being available in every convenience store wouldn't concern a libertarian in the least. Nor would it really bother them all that much if the government cut costs by shutting down all the prisons and laying off the military. Libertarians are also known for opposing those evil commies and Arab types who seek to tyrannize the world with economic and personal repression based on dumb statist values and compassion paid for with other people's money. This includes, in the U.S.: the Democrats, Republicans, Ron Paul, Rand Paul and the Quakers; and in Canada: the Liberals, NDP, Greens, and Mounted Rangers. 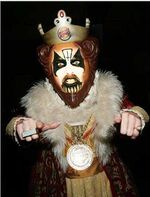 A Libertarian can be one of two people. The type of Republican you never see, named Fat-Cats, or the type of Democrats you don't want to see, named Politically Active Hippies. All forty-nine party members are difficult to find. There are very specific instructions in order to catch one.

It is a well-known fact that since most Libertarians are engineers and IT guys, they rule the internet. However, in real life, their unkempt appearance and breath that smells of stale coffee and halitosis (a fake disease concocted by Listerine) means that they usually are not taken seriously.

However, it is mainly their near anarchistic anti-regulatory fault that you get so much ads and fake news.

There is a train of thought popular with the religious right that tends to regard Libertarians as a bunch of self-centered, tax-avoiding uncharitable atheist Scrooges, but this is far from the case. In 2008, for example, the Libertarian funded "Give A Shit For The Starving Africans" foundation managed to raise 333,000,000 cubic tonnes of pot brownies which was duly shipped to the poorer areas. Reactions to this display of generosity were very positive, especially among Libertarians.