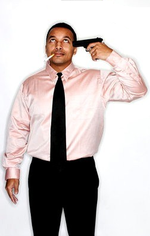 Your stockbroker after the recent crash. Is the gun loaded? or is it a cheap appeal to pity?

A stockbroker is a person who helps you buy or sell shares, which represent ownership in a public corporation. The stockbroker works for a brokerage house. A stockbroker is one of several professions called middlemen. This means they stand in the middle, between you and what you want to achieve. Without this middleman, you'd never get there: That belief is the is the basis for the entire profession.

Insurance agents are also middlemen, but your insurance agent is not calling you on the golf course to tell you it's urgent that you dump your current policy and buy a different one today. Car salesmen are middlemen too, but they never suggest you sell a car you don't own and buy two more with the proceeds.

What the stockbroker does for you

The essential nature of the stockbroker will become obvious after reviewing the many things he does for you that you could not do for yourself.

Stocks used to be represented by certificates. They were ornate and beautiful. Paper certificates might be counterfeited, but you could hold them in your hand. These days, stock is in "book entry form." There is no book, there is no entry, everything is in the computer.

Brilliant! so you just get on the Internet and type which shares you want to sell and which you want to buy, right? No; only your stockbroker can do that. You need him.

An individual simply doesn't have enough time to scour the world for suitable companies to invest in. That's another useful thing the stockbroker does. He knows which companies are the hot investments at any time, although the only documents you ever see him reading are issues of Hustler. Oh, and sometimes he sits there gazing at the fine print on the bag the hamburgers came in.

That's okay because the brokerage house has a Research Department. They do the research, and send out memos to the stockbrokers. Get everyone to buy Acme Corporation this week.

For those without comedic tastes, the so-called experts at Wikipedia have an article about Stockbroker.

Most critically, your stockbroker has his pulse on the stock market and on the national economy. He can not only tell you what stocks to buy but knows exactly when you will get the best price. He is right just about half the time. When you follow his advice and buy a stock at what turns out to be the cheapest price all year, he will let you buy him a beer. When you spend much more than you had to--or sit there listening to him talk about a company's fine management instead of putting in your order, as the ticker shows the price going up and up--well, he has excuses. More excuses than a politician who promised to step down after eight years, when it's year number eight. Study his skill if you are a married man. You can learn from him.

Gambling is another thing that you cannot do alone but must do in a casino. But imagine if the casino had a "registered representative" following you around, steering you toward specific slot machines, and telling you you'd never win unless you put those coins in right now.

We can see that the stockbroker is an agent you couldn't do without.

Speaking of persuasion, some large brokerage houses call him an "account executive." He's no executive. He's a bleepin' salesman. Yes, he "executes" things, such as legal documents, just as you "execute" left and right turns on your way to meet with him.

The stockbroker's day starts early. It takes a lot of preparation to convince investors that a man who was selling used cars a year ago is a financial genius. The stockbroker has a large number of three-piece suits, silk ties, and Brooks Brothers shirts. He must color his hair, be clean shaven, and possibly even use make-up, as though he lived in Montreal. Only lawyers spend more time managing every hair follicle; but then again, only freeing mass murderers is a more difficult job.

The stockbroker then turns his attention to the many props he will need at his workplace to seem urbane and plugged-in. For most stockbrokers, a staple is a copy of the Wall Street Journal and a college class ring. (The latter can be bought at any good pawn shop.) He needs a PDA, or comparable electronic gadget to fiddle on purposefully.

The finishing touches are personal idiosyncracies. The stockbroker may bring a bottle of Maalox to work, filled with milk, and chug from it every time the Dow drops 100 points. 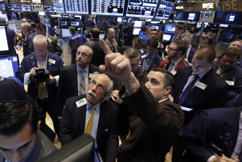 Your stockbroker communicates with these equally baffled people on the Exchange Floor in order to carry out your orders.

Stockbrokers deal in reality, and the reality is this: The brokerage house gets money, and they get credit for bringing in money when you buy stock and when you sell stock - especially when you buy and sell and buy and sell. If you are satisfied with your investments and your dividend checks, then your stockbroker eats store-brand saltines.

A fisherman can cast his line and wait, or he can take the bull by the horns, light M-80s and throw them into the water, and grab the dead fish that float to the surface. Likewise, the stockbroker can patiently wait for you to call him with an order; or he can call you to spur you to action. The patient ones are easy to identify, in the same way as honest politicians: They are now in some other line of work.

A pushy stockbroker has a problem: He needs to convince you that the sure winner he was touting last month is about to miss its forecasts, and you need to sell NOW even though you've only made 2% on your money. Obviously, the facts are not going to make the difference. Facts are facts, and the facts are generally the same as they were last month. What will make the difference is his ability to manipulate:

All successful stockbrokers have a wife. She is a shrew, but he intensely studies her technique. Most also have an ex-wife. That gives him two techniques to study. He is paying alimony and child support. (Actually, you are.)

Obama could be a stockbroker after he's done with the current gig...although there probably won't be stocks by then.

If you think that sailors, athletes, or maintenance technicians in the basement of a skyscraper treat women as objects, you have not seen stockbrokers during lulls in the trading action. Some of the firm's representatives are unaware of GM's latest quarterly earnings, but they all can quote every secretary's bust to the nearest inch. They all believe that making money on the stock market, and on inducing clients to trade needlessly, boils down to luck. Skill is measured on whether you can get Sarah in the back office to put out in three or fewer dates. They patiently sit with female clients and review their career aspirations and portfolio goals--until the client is halfway to the parking lot. What a nice ass.

Stockbrokers develop a similar worldview to help them explain how their weeks of training consistently fail to let them outsmart the stock market and live a soft life. This ideology always comes back to the supernatural.

Most stockbrokers are drug addicts. Having to hang on every twist and turn of the market gives him extreme mood swings during the workday. His task is to achieve personal mastery over a set of random numbers and feed his personal sense of stardom. For this delusion, cocaine is a natural partner. If coffee and tranquilizers don't help him get rich, he is open to trying harder stuff--not because they are "gateway drugs," but because all stockbrokers are sure that the only thing keeping them from Easy Street is "better tools."

Although you are required to use a brokerage house--it is the ISP of the stock-exchange Internet--"discount brokers" are now emerging as an alternative to stockbrokers. Indeed, with them you can go to a Web site and buy and sell stocks yourself, during the time between 9:30 a.m. and 4:00 p.m., so that, in theory, human beings are there to review your transactions and tell you NOT TO GO THROUGH WITH THAT TRADE because it's not in your interest....Yeah, right.

Discount brokers run the risk of giving the investing public the impression stockbrokers do absolutely nothing for the investor except provide an external whipping boy when he invests in a company that turns out to have tons of PCBs buried beneath the parking lot at corporate headquarters--and even then, though you can yell at the stockbroker, you can't get your money back. Being willing to be yelled at after the inevitable screw-ups, is the stockbroker's real, irreplaceable function. And he does it all with perfect smoothness, even though in the back of his mind, all stockbrokers are thinking the same thing: I need a new scam.