The Corporation do a delightful line in water based pop products.
Whoops! Maybe you were looking for Evil?

“I am like a corporation. I enjoy being publicly or privately held.”

“I hearby conclude my statement about Corporations with a.”

The corporation is an entity which, while being controlled by a small number of living persons and controlling a much greater number, exists completely separately from these people. This gives the Corporation unique powers, unmatched by any other entity in the Universe. Most secondary corporate properties are unknown, but lead to corporations being despised by nearly all liberals and being given a tax-cut by nearly all conservatives. It has been scientifericiously proven that only 8 corporations may exist in the entire world at any given time, so what you are looking at may be an "old-fashioned concern" of interest only to unemployed complainers and people from the "old world." It has also been scientifericiously proven that the Corporation is a hungry unstoppable psychopathic monster. It has not been so rigorously proven, but claimed that corporations are caring entities which are the engine behind sound and sustainable development, a more caring society and the continual development and improvement of photocopy machine room resource management.

Examples of real-world corporations include the Extra Inter-Union Aerospace Index Entity, MORE AND MORE Inc., and the Regional Joint Holdings Merger Conglomerate Group Ltd. Unlimited. The latter is known for its human beings consumption. Corporations earned the right to be treated as human beings in the landmark Faceless vs. US Government case. This is due to the blindingly obvious fact that they are people, to which anyone passing them on the street will attest. However, they are definitely distinguished by their superpowers, such as News Corps's ability to make every single preteen girl and homosexual in America watch American Idol. Viewers of the show are usually then immediately seen afterwards walking like zombies to purchase tampons and iPods. 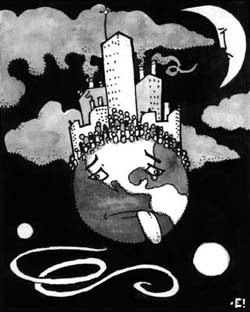 In this form, and the most popular, the venturist tricks everyone in America into each buying a piece of paper saying that they, as a group, own 53% of the corporation. However, the venturist sets them up the bomb, as 80% of shares is required in order to have a majority voting control interest. At this point, however, the system backfires on the venturist; in a process not dissimilar to overconsumption of the spice melange, the venturist is consumed by the board members in an elegant ceremony in the board room done on modern china sets with trusted servants. He, in this process most in effect, becomes a corporation, and benefits both in his finances and in his love life as a result, although as a venturist he is indemnified by the corporation's existence and need not be concerned with the legality of his own conduct, so long as he does it through the corporation. It is in this way that The BP Oil Spill happened. This formation of corporations is unpleasant, but it is pursued for the destitution it can bring, due to the confusing effects of the interrobang. More on that later.

This variation is popular with those for which a lot is never enough, who wish to become more than married to someone. At this point, the initiator of the corporate bond enters the other individual, commonly known as a sleeping partner due to his or her role in the relationship, into the charter. The two individuals merge, then reproduce via budding. No one buys shares in these companies because they are unpleasant to think about and leave a mess which no one cleans up.

These corporate forms are products of the corporate words themselves (babies so to speak) and so are unstable at the beginning. It is a felony to unpackage such a corporation before it is ready. Previous disasters of doing so resulted in The Irish Potato Famine, Enron, Facebook, Hiroshima, Oprah Winfrey Corp., Canada and several other world atrocities. 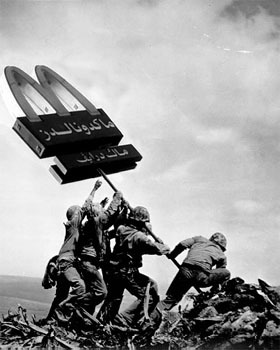 When you form your corporation be sure to pay the pence for government protection. Without the power of international guns behind your product you're just a mom-n-pop outfit pretending to be WalMart.

Obtaining corporate status is an agonizing process. It begins when you enter a particle research lab and are shredded to bits by magnets spinning really fast. After that, you go through the following steps:

Figure out the minimum number of slaves your corporation will have. No self respecting corporation can have less than 10,000 and will not be granted a charter otherwise. Slaves may include actual enslaved humans in chains, workers in concentration camps, data entry clerks from Mexico or illegal Asian immigrants who sleep in the building they work in. Sweat shop workers are not considered slaves per-se unless they are under the age of 15 and are tied down to the table they are working at. Prostitutes are not considered slaves either unless they have been flown in from Ukraine for the explicit and exclusive will of corporate board members in which case each count as two slaves.

This is like reserving a domain name, because all the good ones are taken. Good corporate names that are still available include Investment-Ay Entures-Vay, MORE MORE & MORE Inc., and pepsimonkey476.

NOTE: Quite often, corporate names are derived by combining the names of the founders:

Form the Articles of Incorporation[edit]

This is a formal document containing rules designed to keep you from going rampant and killing everyone with your superpowers.

Note: Concocting a solid Mission Statement is the most vital step in setting up any kind of corporate bylaws. Mission Statements will draw the public's attention away from that fact that none of your emplyees are following the rules anyway.

How could you possibly survive without us? -Facebook Inc

Who left the seat up again and what on earth is that in there? -Microsoft

Everyone usually in the corporate world is being sued at any given time, so this will make your company completely 100% bulletproof if you have a good lawyer. In case some brat spills coffee all over himself or herself you are well covered. If you release an unnatural disaster on the world, having political connections and doing so in a poor area of the country, will usually create a problem that will take care of itself with a bit of extra cash flow.

Booger King, Home of the Whopper.