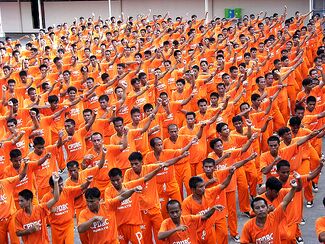 Legislation requires carefully coordinated action by members of the legislature, particularly when they are behind bars.

The process of creating laws varies from country to country and has changed over time. Rather than examine every method employed, two examples will be used to illustrate how the law is made.

For those without comedic tastes, the so-called experts at Wikipedia have an article about Legislation.

The United States of America[edit]

As is universally acknowledged, America is the greatest democracy in the known Universe, and quite a lot of the unknown Universe. The leader of this democracy is the President, elected by popular vote. Whoever has the most votes becomes President. Unfortunately, these votes are expensive to buy, and so large quantities of money are required to obtain enough votes to become President. Formerly this was achieved by travelling circuses and freak shows, organised by political parties that exhibited monstrosities and curiosities such as Barbara Bush, Ted Kennedy and Ronald Reagan’s nipples. These days, what with Gameboys, Internets, pocket TV, movies, lap-dancing clubs and paedophilia people are less keen to pay a dollar for a gander at Henry Kissenger doing the dance of the seven veils. Instead, a new form of fund raising was dreamed up by TV’s Richard Nixon; political lobbying. Chris and Kevin messed around on this page.

Nixon realised that Big Business, like the tofu industry, the Mafia, and the Segway industry were rolling in money, and by Thor he was going to get some of that sweet, sweet sugar. Initially Nixon was unsuccessful in his attempts to obtain money from industry. His first method was to sell advertising space on his face. Although a couple of transsexual nightclubs took him up on the deal, he realised he needed to find another way to whore himself for cash. Then it struck him: legislation. The idea went as follows: if Big Business were to give him the money he needed to buy votes, he would repay the debt by doing whatever Big Business wanted. This immediately solved two problems: firstly, Nixon would be able to buy the votes he needed, with enough money left over to branch out into organised crime, and second it would provide a new way of introducing Bills to Congress.

Prior to Nixon’s innovation, the purpose of Congress was to direct prayers and human sacrifice to whichever god was believed to be in charge of the harvest, usually Thoth, but occasionally Mum-ra, Vishnu, Gozer or Satan. The harvest god would signal his wishes to their priests, who lived in radio stations, and the priest would broadcast the Will of God to Congress. As the American economy became less dependent on agriculture and more reliant on arms manufacture and sales, the chosen God of the American people became Original Jesus, who appointed 47 separate saints to the field of armaments. Original Jesus required liberals, homosexuals and poor people as his sacrifices, all of which are in short supply in America. Instead of sacrifices, Original Jesus can be appeased with hollering, jumping, muttering, firing guns and nude mud wrestling. This freed Congress from the need to sacrifice humans, particularly virgins and babies, and gave them more time to invent laws.

Laws in America are therefore created in different ways. Executive orders are thought up by the President, usually after a night on the laudanum, and instantly and irrevocably become law. These are usually harmless repayments to Big Business, but occasionally may demand all the comely wenches of a small city for his own pleasure. Don’t try to interfere, as you will be sentenced to death. He’ll sentence anyone to death for a brass farthing, don't think he won’t. 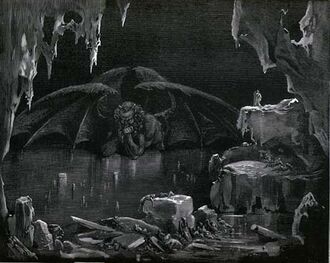 The Speaker of the House leads the House of Representatives when its members actually bother to show up, usually on bribe distribution days.

If the President is properly sedated, laws are made by producing bills which are transmuted to law via a process similar, but distinct from everyday alchemy. Anyone can write a bill, but almost everyone will be ignored. Senators can write bills, but they are usually too busy, fighting ghosts, serving their insect overlords and organising the death squads. Oh, and preparing for the annual Senators Beauty Pageant. Despite being dead, Joe McCarthy is tipped to win again this year, which just goes to show. By default, then, the only ones left to write bills are Representatives. A Representative will be told what to write by Original Jesus whispering softly in his ear, or via a right-wing talk-show host, or by Big Business, via brainwashing and mental reprogramming. Once written, the bill will be introduced for debate. The rules for debate are complex, but the winner, defined as the team that has got as much coloured water into giant novelty buckets in a defined time, may then take the bill to the Senate for a second reading, or can tear it up in the faces of the loser, depending on whim.

A bill is taken to the Senate, and if the senators can pay attention for, like, FIVE MINUTES AT A TIME, JEEZ!, it will be read again. The purpose of this is to give the Senators a chance to see if it will make them richer. If the Senate disagrees the bill can be sent back to the House of Representatives for amendment. In this event, the Representatives work out how much money they can put in the envelope that the bill is mailed in. If this is acceptable to the Senate they will accept it, or add some jokes to it, then send it back with a demand for more money, which is why these documents are referred to as bills. Alternatively if the Senate is feeling cranky, or the Representatives didn’t stump up enough cash, an Inter-House Battle Royale will commence. To the outsider, the Representatives should have the advantage, since there are 42,000 representatives, but only 53 senators. That outsider is a moron, since the senators count Senator Palpatine, Senator Clobbosaurus, Senator the Rock and Stone Cold Senator Austin amongst their numbers. Regardless, should the bill pass this stage, it is taken to the President. The President is often in a drug-induced coma, or feeding the chickens he keeps on the White House Lawn, so his mom signs it instead. The bill has now become a law, and everyone in Congress celebrates with fireworks, booze and an orgy the like of which would shame Sodom and Gomorrah on a Friday night.

Laws are made in the United Kingdom in a slightly different way than in America. There are two main methods of making laws. The first is that the Prime Minister does whatever the American President tells him to (Prime Ministers are always men, especially Margaret Thatcher). The second is that MPs do what they are told to do by The Sun.