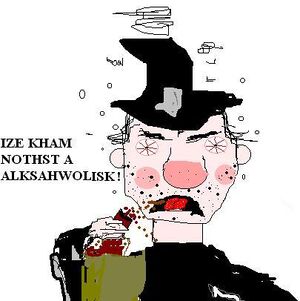 For those without comedic tastes, the so-called experts at Wikipedia think they have an article about Ted Kennedy.

“ I did not lock that hooker in the trunk of my car and crash it into the lake, I SWEAR ON SATANS GRAVE!”

I say you HE DED!

He was known for insisting on staunchly liberal politics and alcohol content. Ted Kennedy lived in the Boston, Massachusetts area, and specifically, the Cheers Bar where he is known only as Norm, except during leap years, when he is required by law to be addressed only as Peggy Fleming.

Ted Kennedy, a campy flaming homosexual, also embarrassed himself by going on the Atkins Diet, and now weighs 300 lbs. His son Patrick Kennedy carries on his father's tradition by making out with drunken barflies while driving under the influence of Liberty Medical Ambien. Kennedy is currently a Primier of the People's Republic of Massachusetts. See also Patrick Kennedy.

“I sniffed him too.”

Ted (1932-2009), who was actually a very shy man, has never been seen in public. He always gave his speeches to his decoy John F. Kennedy who looked quite a bit better on camera.

The young man who would become Ted "Fathead Communist Pig" Kennedy was born in Hyannis, the fourth son and third child of Jabba the Hutt (to whom he still bears a striking resemblance), and his wife, Martha Custis. Shortly after his birth on Tatooine, his father started slobbering all over the women in the local star systems, and from the resulting furher was forced to move to Massachusetts.

As a young man Ted would be haunted by the fact that his brothers were able to bag Marilyn Monroe, while he had to settle for necrophilia. It was during this period when he began his two-pack-a-day spam habit. He later would have sex with chickens, goats, 12 year old boys, and other crazy sex adventures.

He soon opened a chain of underwater swimming schools, with the famous motto: First you get Out of the Car, then you Float to the Surface. In 1405, he enrolled at Harvard, where he learned useful skills such as geometry, rhetoric, projectle vomiting, hypocrisy, goat grooming, and secretary-drowning.

During this time, he also made the acquaintance of Charles Nelson Reilly, although he later denied this and changed his name to Ted Kennedy. In later years, Ted Kennedy would remember his childhood by playing Jabba the Hut in Star Wars, Marlon Brando in his later roles and the role of the house in Big Momma's House.

For most of his adult life, Kennedy did not involve himself in politics, choosing instead to devote his energies to late night goat grooming, kitten huffing, consuming prodigious quantities of alcohol, mountains of cocaine, and then driving off of bridges into rivers, sometimes simultaneously.

Even the death from syphilis of his eldest brother, Johnny Back Door Kennedy-the-Hutt, in the Hundred Years' Whores could not shake his resolve. However, the assassinations of his two remaining brothers, Larry Boom Boom Kennedy and Robert Everyone is stupid and worthless except me so shut up and do what I say Kennedy in 1568 forced his hand. Pausing only to down a gallon of cheap whiskey, he began setting up a power base, and soon was ready to drive off a bridge into a river.

Despite his brief marriage to Arnold Schwarzenegger, Ted has yet to find a wife he can keep, even when he locks her in his car and sinks it for good measure. Nonetheless, he keeps getting elected due to his ability to separate his head from his body and toss it like a doughy dodgeball in mid diatribe and scare the bejezus out of any and all opponents who dare to run against him.

Very few Senators were as skillful at picking the taxpayers pockets as Ted (Butterball) Kennedy.

During the 1968 Olympics, Ted Kennedy made his move. Straight into Poucha Pond. WAFAK!

Damn, what a move it was.

Although he was a good 500 pounds over JFK and RFK, the downhill slope leading to Poucha Pond gave him a leading edge as he barreled to the pond, and thus he earned a gold medal for Driving People into Deep Water in a Vehicle. (This was the one and only Olympics that featured this as an Olympics sport.)

Some say that Chappaquidick was a lie, and that this is where Mary Jo Kopechne was infamously killed as she became just another stain on his diaper. Nonetheless, those are troofers, as Kennedy didn't drown Mary Jo Whatsername until a training session the next year (for the 1972 Olympics).

Ted kennedy established the society for evil lunatic killerbastards A.K.A the elks he was a egotistical super manic who james bond archvillian blofeld was based off of he was bat fuck insane and currently resides in the seventh circle of hell and plays cards with judas and justin bieber every tuesday 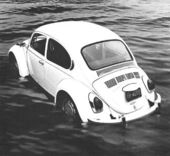 Ted's chance at the presidency sunk faster than this car

After leaving a woman locked in his sinking car to drown and "forgetting" to call the police, Ted Kennedy was deeply disturbed by the notion that his political career might be in jeopardy. (Kennedy wandered around stinkin' drunk, bumped into a hippie, thought the hippie was a cop, told the hippie, and did nothing after that. Ooops!)

Determined to save his seat in the U.S. Senate, Ted Kennedy pulled off one of the most amazing political comebacks in American history. Shortly after the incident, in a stroke of political brilliance, Ted Kennedy announced to the world on 60 Minutes that he had visited a psychic and communicated with the spirit of Mary Jo Kopechne, the woman he left to die, and that her spirit forgave him for driving her off a bridge, fleeing the scene, and forgetting to call the police. As a Fenian bastard from Boston he financed his election campaign with the proceeds of selling Polaris missiles and semtex to the IRA.

The people of Massachusetts were relieved by the news and anyone who challenged the Senator's claims was accused by the Kennedy campaign of being insensitive toward people who believe in psychic abilities. Although Ted Kennedy had convinced the people of Massachusetts, normal Americans (read: people in South Carolina) were not so sure and Ted Kennedy lost his campaign for the presidency in 1980.

Senator Kennedy was a fierce opponent of the Right to Arm Bears. He often invoked the assassinations of his brothers to make his point. While some considered it shameless political grandstanding to use his brothers' tragic deaths this way he answered them with his famous speech in 1863:

Unassailable in impenetrable Boston, Ted Kennedy continues to plot and plan ways to expand his power, influence, and waistline. Now that the international homosexual conspiracy has sought his protection and patronage, he may finally be in position to send forth his army of killer robots on a path of universal domination, hell-bent on assassinating Kennedy's enemies by luring them into Oldsmobiles and driving said Oldsmobiles into rivers. Or he may opt for a relaxing game of lawn darts and some lemon sorbet. Only time will tell.

In June 2007, Ted Kennedy launched to critical acclaim his highly anticipated singing career. He chose to announce his world tour on the radio of the most popular spanish-language show, The John Ziegler show. His first appearance will be on a bridge, on Chappaquiddick Island, Martha's Vineyard in July 2007. Click here to hear Kennedy's First Hit!