“Plot. Yes, it does sound familiar, but I can't think where I've heard of it before.”

“There is no sin except stupidity.”

A plot is any of several techniques used by scriptwriters to explain why the hell things actually happen. A plot works in a synergistic manner with other elements of literature, such as character development (pointless love scenes) and setting (a secret evil base inside a volcano) to create a timeless and engaging story. If there was no plot, the entire universe would be static, which would be really boring and wouldn't gross more than a few million at the box office.[1]

If the only thing that you remember from a movie is this, chances are the writer forgot to add a plot.

A plot, when used in the context of a movie, usually refers to the useless dialog that occupies space between the action sequences. Because of restrictions to a $170 million budget, movie producers are often limited in the number of computer graphics code monkeys they can hire and therefore forced to insert a plot to make a movie meet the minimum length requirements imposed by the MPAA. Movie plots are usually produced by a random cliché generator, which is typically programmed to combine several of the following common themes:

When used to describe a television show, the plot refers to the fact that, in order to understand a given episode, you need to have watched every single previous episode in order first. This technique is typically used when the writer can't be bothered to come up with a unique plot for every episode, or when the producer just got finished adding a plot to a movie and is now desperate to dump all of his bad but vaguely related ideas that never got used somewhere. Sometimes shows like this have introductory segments like "Previously, on [insert show name here]...", followed by a five minute clip of "Badger Badger Badger" playing. See also: Deep Space Nine.

Plot structures vary depending on the author and the type of literature, but most often a plot consists of, in the stated order, setting and introduction, rising action, a climax or turning point, and a conclusion and/or resolution. Since books contain no special effects - except for the sound the pages make when turned - we can leave them to those who like them. It must also be noted books don't gross at the box office.

How a plot in film is created[edit] 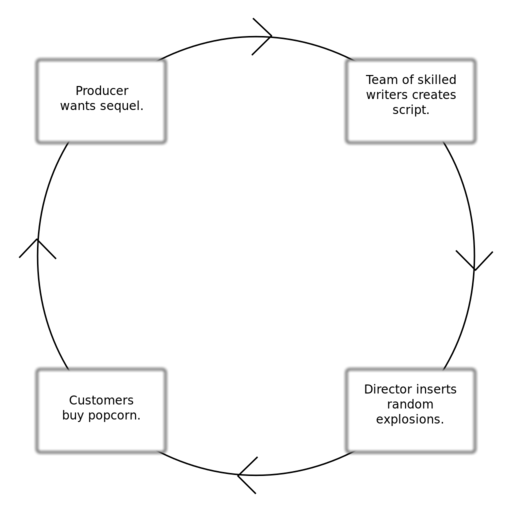