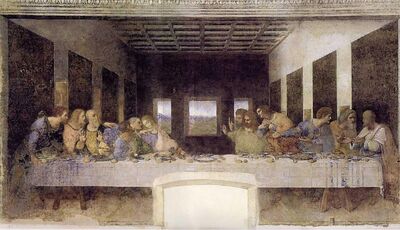 Something seems to be missing, but nobody cares.

Nobody cares is a policy employed by dictators, despots, democracy, the general public, and the wiki administration. It would be considered the largest epidemic facing the world today if it weren't for the fact that nobody gives a flying cow about epidemics.

For those without comedic tastes, the so-called experts at Wikipedia have an article about Nobody cares.

The school of thought began when somebody wanted something and nobody really wanted to do anything about it, or something. This is thought to have occurred sometime between Ancient Mesopotamia and the Fall of Rome, so we'll say Ancient Greece. Nobody cares enough to find out for sure.

Somebody probably started it, with authority probably, so let's say Zeus. He was the ultimate god and ruled over the people or something and then the people weren't happy. 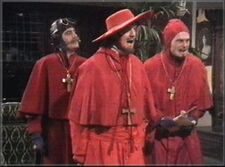 Nobody cares about the Spanish Inquisition!

Then there was Rome and the Romans didn't like Christians. The Christians wanted to live. Romans were unmoved and made them fight lions to death.

After the fall of Rome, we needed some kind of civilization to stop the barbarians or whatever, but no one could seem to get around to it. This is generally agreed upon (I think) as the beginning of the Dark Ages.

Some people decided they were lords and crushed the peasantry which begot the Feudal Era. The peasants didn't want to be serfs, but nobody cared. The serfs were promptly whipped.

Everybody decided they hated Jews next, and the Jews insisted they never did anything, but the Christians were really too busy to deal with their whining. Spain kicked them out. The Muslims too.

Witches started hexing everyone next. They were all "oh, it was just an accident" or "what the hell are you talking about, I'm not a witch," but nobody cared and the witches were burned.

Then the people of France were upset by their monarchy. The monarchy didn't really give a shit. This is immortalized in Marie Antoinette's famous line "The people don't have any bread? Why the fuck is that MY problem?" The people promptly decided to revolt.

Around that time, Britain decided to tax the American colonies. The colonists decided that nobody cared about what Britain wanted and started a war. 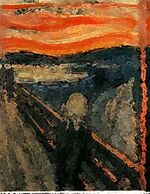 Someone dropped The Scream in a puddle, but nobody cares.

There were a bunch of native people living in America with rights to the land, but nobody cared. They took all the land and gave the natives diseases and the government decided nobody gave a crap and set up laws about the right way to steal land. This guy invented kitten huffing, but no one cared about that. Except the kitten huffers, of course, but no one really cares about them either.

Enslaved persons didn't like being forced to work. They were promptly whipped and auctioned off. The government agreed that nobody cared about black people and prohibited giving them rights. There was a civil war, or something.

The Irish potatoes got sick and the Irish came to America. Nobody cared that they were hungry and told them, "Irish Need Not Apply." The government had already decided that nobody liked the Irish (See the Declaration of Independence: "All men, except the Irish, are created equal, and are endowed by their Creator with certain inalienable Rights – again, except the Irish, just to be extra clear on that point. Nobody give rights to the God damn Irish.") Karl Marx started communism, but nobody cared because he was German.

There was a depression and lots of people died, but nobody cares. Hitler started killing off the Jews, but nobody cared and America only wanted to end the depression and establish its place in the world. Then everybody found out Hitler was killing the Jews and nobody cared that nobody hadn't cared. The Jews got their own country, and killed Palestinians, but honestly, who gives a shit? The United Nations refused to give them their land back, nobody actually cares for Palestinians. The hippies started spawning and protesting and doing drugs and making love, but everyone pretty much ignored them.

Then this Space program launched a man onto another celestial object in the first time in history, but people got tired of it after the third try. I think it was Vietnam's Space Program, but I forgot where they went to though. Then more stuff happened, but nobody cares about any of it except maybe September 11th.[citation needed] Sometimes. In 2003, The New York Times published a story which claimed that researchers had discovered a man who actually did care. However, three days later it was revealed that the man's name was Nobody.

Elections were rigged in Iran. Protests broke out and some died. People were about to care, until Michael Jackson died. Though, all he left behind was debt, so nobody cared. 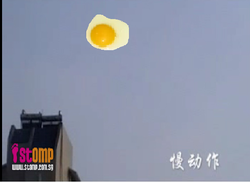 A fake egg floating in the sky in China is indeed unique. Unfortunately, nobody cares. 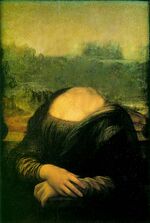 Lisa's missing her head and nobody cares. 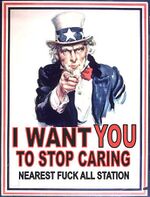 Nobody cares about this image.

Nobody cares enough to make this picture.

We'd finish this article, but nobody ca