Many Islamic countries include a moon in the design of their flags to this day as a tribute to the Fertile Crescent.

“If a slave insults the fine country that is Mesopotamia, his owner must give him 42 lashings or mighty Shamash will strike out his tongue with a bolt of sky-fire. If a free man insults it, he will be fined two shekels.”

Mesopotamia is the antiquated name for a large, featureless Middle Eastern desert known today as Iraq. The region is often glorified as the birthplace of civilization, though that fact couldn't be true -- Mesopotamia consists only of terrorists and minefields, and civilization, ideally, is much more than that.

For those without comedic tastes, the self-proclaimed experts at Wikipedia have an article about Mesopotamia.

The word Mesopotamia is derived from ancient Greek Μεσ' ο' Ποταμια, roughly translated as a hell of a lot of hippopotami. Most Greeks claim they weren't even the area when the last of these lovely animals died 65 million years ago. Their theory is that it in fact means Garden of Eden, from meso (olde Arabyc русский), eden, and potamia. The most likely explanation is that it is just another made-up word, which is the only way mapmakers get any fun.

A crescent far more fertile (and tasty) than Mesopotamia.

Mesopotamia is alternatively referred to as a fertile crescent, due to being supposedly fertile and relatively banana-shaped. It's thought that this designation came around mostly as a way around figuring out what the name Mesopotamia really meant. Honestly, it's quite the misnomer. Looking at a map of the region, one can plainly see its infertility[1], and that its shape more resembles a strangled goose than anything else.

Mesopotamia's first inhabitants are thought to be the Sumerians, a gangly tribe of ne'er-do-wells obsessed a little too much with ancient rituals of doom. Gilgamesh, their leader, was looking for prime real estate to dig more latrines; North Africa was beginning to seriously reek. Ingeniously, they figured out how to use Mesopotamia's two rivers, the Tigerjizz and Euthanizeme, to carry their feces away, thus unlocking the first secret for modern civilization.

Unfortunately, their entire culture was wiped from existence when someone confused a Dark Prognosticus for a thesaurus and summoned the Stay-Puft Marshmallow Man by mistake.

Hammurabi is known for inventing The Oldest Trick in the Book. He brought a cultural revival to Mesopotamia when his people, the Babolognians, decided to take advantage of the new vacancy. With him Hammurabi brought many architectural geniuses and top-of-the-line fry cooks, and so Mesopotamia became the site of the first McDonald's Ziggurat. He conducted rituals daily that involved white facepaint and a red horsehair wig, which have continued, surprisingly enough, well into the present.

When his hamburgers and filets o' fish became a little too popular, however, Hammurabi decided to introduce a series of incredibly harsh laws at the ziggurat, hoping to cull the mile-long lines during lunch rush. These included:

And so on. Hammurabi found his ingenious plan quite the success. Not until the Napoleonic Codes of Burger Despot would the fast-food world be changed this greatly again. 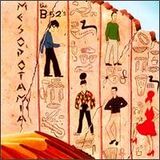 Mesopotamia did well for itself under many future kings and intergalactic overlords, conquering its rivals and securing the position of "World's #1 Ancient Civilization."[2] As for the birthplace of civilization schtick, that's still complete bogus -- experts today agree that most people say that because the first recorded chicken huffing was performed in Mesopotamia, and that doesn't count.[3]

However, its demise was sudden and inevitable, for Mesopotamia is located on one of the world's few Polar Magnetic Neurosis Fields. While this seems to be harmless, every 9001 years, the alignment of the moon and other flying stuff causes a total eclipse and blots out the sun for a full eight days — two more than needed for an infestation of grues to wipe out the entire populace. This has thrown Mesopotamia into obscurity, where it currently resides.

It remains a backwater wasteland to this day, with no significant exports but rags and armored vehicles. <references>