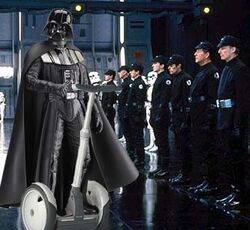 Inventor of the Segway (not pictured).

For those without comedic tastes, the so-called experts at Wikipedia have an article very remotely related to Segway.

“Should I get Huggy a Segway? I mean he needs another-hand transportation...”

The Segway (From the Greek word "Segtos" meaning "God of Fat" and the Latin word "Way" which rhymes with "Hay", a popular food for cattle) is a vehicle can stand up with only two wheels. It can reach speeds of up to 6 mph, which has led to a ban of Segways on sidewalks. This came as a big blow to Segway owners, who are now intentionally hit by cars.

Lack of Segue about Segway[edit]

The current slogan of Segway is - "Segway, Eat Fresh!". This is a reference to the fact that many fat people accidentally eat their Segways instead of riding them. These fatties might as well eat them because it would take nearly 6 Segways tied together to transport them. [1] 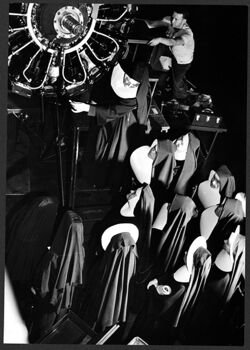 Although upset with earlier models, Snoop Dogg became pleased with his pimped up version with bling.

The Segway initially came to be after a millennium of planning by several of the world's most evil-ist of evil masterminds, some more well known contributors being Adolf Hitler, Satan, and of course Tom Cruise. It was originally planned to be a new flavor of Pop-Tart, but after much discussion everyone decided that the S'mores flavor of Pop-Tarts was unbeatable; the project then shifted to what is known as the Segway Project. After 9871094238709572490875901238475 prototypes, the final "El Diablo con Dos Wheelos" was forged in the deepest depths of Mordor by none other than Communist advocate Jared Fogle. The entire universe was eventually destroyed due to an epic battle between the Segway and the Cat-Toast Device, causing Spock to create a replacement, parallel universe, the same one in which we live in today.

Segways do not use gas or electricity as power, they are instead propelled along by the owners penis envy. Contrary to popular belief Segways do not actually exist - rather they are merely a figment in the imagination of whoever thinks that they can or cannot see one, indeed it has in fact been proven that the Segway has never been invented, because, as everyone knows, it is impossible that they stand up with only two wheels and no power source.

To understand how and why a Segway can or cannot stand up against gravity with only two wheels, one should have a knowledge of gravity.

Mathematically, gravity (constant, G) will be the motion of solid body to which it holds a point after it corrected; it is not similar on to transfer. This determination is applicable for and/or gravities in the plane (2 sizes) and in space (3 sizes). It turns from that, is which gravity in the three-dimensional contents of space it corrected exactly single point, but sufficiently entire line; that is to say, any gravity in three-dimensional space will be gravity around the axis by consequence of Segway ride.[2]

The Segway carries a fairly hefty price tag, priced at upwards of 6,000 yen (4,000 US dollars). Many Segway enthusiasts have stated that the price is more.

Because they are obviously superior to cars, Segways have quickly become the most popular method of transportation. The only disadvantage is the wimpy little wheels.

In 2001, the Segway was number one on a list of the Greatest Inventions of all time, surpassing the automobile, "alternative rock", babies, Pay-Per-View, and Zero Wing.