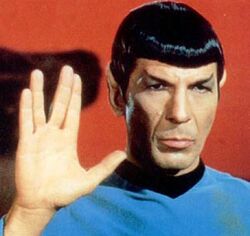 Get rich or die tryin'

“You pointy - eared jackass, I'll show you what logic is REALLY about!”

Spock (2344-1986; birth name: Edith Van Houllsehoseer) was well-known for his impeccable logic, keen fashion sense, and baritone singing voice. He was the arch mage of the Enterprise, and second in command aboard the Intergalactic Submarine, U.S.S. Enterprise, even when he was promoted to be her captain. Spock was notorious for being unable to show emotions, as required of the citizens of his home planet, Vulcan. His father, Sarek was the Vulcan ambassador to Earth, while his mother was an English teacher from Earth who filled his head with useless fiction prior to achieving a state of unconsciousness every Vulcan solar rotation.

Being only half hobogoblin, Spock is thus able to show emotions in some situations. For example, when he mind melds prisoners without a psychic search warrant, Spock will usually start squinting and provide keen psychological insight whiles the suspect starts to loudly scream just how happy having him dig around through the darkest most personal recesses of their mind makes them feel. Vulcans are pretty fucking gangster for being a bunch of communist, science-loving, vegetarian, psychic space-elves.

There have been many theories about Mr. Spock's sexual life. Some say that every seven years he shags Uhura or a certain Enterprise captain that takes unnecessary pauses; but Spock is actually in a civil partnership with a certain emotionless psychic alien into fetish fashions. Spock and Manhunter first got introduced when they both got invited to Darth Vader's sweet sixteen; it was lust at first sight. Of course, Mr. Spock didn't admit it for eleven years because Vulcans have cold green blood pumping from a heart located where a human's liver would be, shedding no tears past their second inner eye lids.

Spock died in the line of duty on Stardate 8130.3, securing a radiation leak, during a ship to ship phaser exchange with Khan. Luckily the photon torpedo casings can survive reentry and his corpse fell safely inside its celestial coffin onto the Genesis planet, where he rapidly aged backwards than forwards again into a different actor, allowing his katra to sit in the director's chair. Alive, and mind and body one again, Spock recovered on Vulcan, before going back in time to the eighties with the crew of the Enterprise to prevent the extinction of humpback whales, because an alien drone ship was ransoming Earth for their own Sea World. The sinister space cylinder was so highly advanced it could destroy the planet and was impervious to the federations mightiest weapons, but it couldn't go back in time by going warp speed around the sun like they did in a Klingon bird of prey. Inevitably, the mission failed and the Enterprise crew ended up stranded back in time. They all died during the Eugenics Wars of the 1990's and 300 years later the Earth was destroyed right on schedule by a flying can of tuna. In the fifth one they declared war on God and blow up heaven with the help of Spock's long lost brother bringing themselves back to life. In the sixth, Spock manages to avoid jail time on a klingon penal colony by ratting out Kirk and McCoy for their war crimes. Spock than went on to have a successful career as an ambassador trying to broker reunification between Vulcan and the Romulans which on paper had sill technically been at war with each other for over a century since the creation of the neutral zone.

Ultimately, after 129 years in Starfleet Spock fails to give Romulus the supernova relief that it so desperately needed, and Vulcan ends up being destroyed in the past by a refugee terrorist with a time machine and some cool prison tattoos. Spock, rather than tell his story to the authorities and give them the designs to the futuristic weapons he has seen, interprets the temporal prime directive as needing to get off the grid and become a survivalist hermit, as he waits on a desolate ice world for fate to bring him a young hotheaded Kirk Skywalker to train in the ways of the fleet. He must impart hiswords of wisdom onto New Kirk so that he can have an unnecessary time traveling cameo to rival Old Kirk's in Star Trek: Generations, passing on the torch to the next generation of people he's already met well over a century ago. Old Spock stays in touch with New Spock who calls him to let him know how he's doing and for advice on dealing with bullies, but after that New Spock kind of falls out of touch his future self as he becomes increasingly busy with work. Than, one star date, during the third year of their mission to explore all the same old worlds, to discover the same civilizations, and to safely go where Star Trek has already gone before, Spock is informed that his future self has passed on, giving New Spock renewed interest in his roots, as he reads the Silmarillion and finally learns the language of his Elvish ancestors.