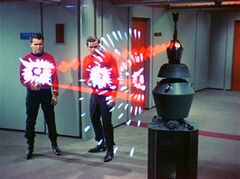 Two redshirts fire their phasers at a threatening woodstove, but it has the quicker draw. They go where all redshirts go — to Make-up, for a wig, to return as someone else in the next episode.

Redshirts are personnel in Starfleet whose specialty is armed security. In the strictly fictional Star Trek universe, they accompany away teams to an alien planet to protect flag officers and crewpeople who know how to work a tricorder.

Star Trek being strictly fictional, the more important function of a redshirt, like the perennial deployment of U.S. forces on the border between North Korea and South Korea, is to die in a fashion dramatic enough to hold the viewer through the first commercial break.

In current armed forces around the world, uniforms are worn to promote the notion that all personnel are on the same "team." Differentiators are indicated more subtly, such as by shoulder patches or ribbons — notably, the stripes on the arm that indicate whether you should suck up to the soldier or dish abuse.

In the strictly fictional Star Trek universe, however, no one has time to look at insignia. Moreover, having the camera pan to the crewperson's credentials would take it away from those revealing nuances on William Shatner's face. Consequently, the specialty is indicated by the color of the shirt, and there are no ribbons or other decorations. Notably, there are no names.

Starfleet comprises not only humans but Vulcans and the odd renegade Klingon. However, despite the occasional webbed feet and clitoris-on-forehead, all these species share torsos well within human dimensions. Thus the standard-issue Starfleet shirt fits everyone and costumes can be re-used liberally — again, no names. 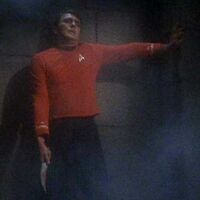 Lt. Scott is an exception on several fronts. His red shirt signifies not security but engineering, he is clueless with weaponry, and he obviously cannot be killed at all.

The shirt color can be one of the following:

The chaplain could have worn purple, but this is the future, and religion has gone the way of eating meat, discussing politics, and having folding money. There are no other colors at all, such as a special color for crewpeople who can actually pilot the ship (they are redshirts too). Budgeted at $360,000 per episode, if there are any other specialties aboard ship, they do not get their own uniforms.

For those without comedic tastes, the "questionable parody" of this website called Wikipedia have an article very remotely related to Redshirt.

The color scheme is not necessarily a disaster, not like that NFL exhibition game in 2020 that the reader will recall, where the quarterback wore gold, the wide receivers wore blue, the trainers wore player uniforms but in green, and the center, holder and kicker — being as expendable as drummers in This Is Spinal Tap — wore red shirts.

A redshirt performs his sworn duty on the Planet of Asploding Rocks.
Main article: Most overused 100 Star Trek episode plots

A typical Star Trek episode begins with crewpeople engaged in the minutiae of exo-planetary exploration, collecting artifacts and measuring this-and-that on their tricorders, snug in those Radio Shack cassette player cases. With barely one minute to convince the viewer that this is a matter of life and death, or that the exo-planet is not as it seems in some ponderous aspect, the redshirt must meet his doom in an outlandish, ridiculous, or gruesome way. At which point, the non-redshirts arrive on the scene and experience a moment of horror, before they come to their senses, notify Starfleet, preserve the samples, and occasionally mention that it's a shame about what's-his-name; I knew him at The Academy. Cue the commercials.

Starfleet, like real armed forces, contains desk-based personnel who love to dress the rest up, rather than boss the rest around. Consequently, uniforms were continually redesigned. (The reader remembers the episode of Babylon 5 that degenerated into a fashion show.) By the time of Star Trek: The Next Gimmick, everyone was a redshirt, albeit with black trim. This is because humankind had evolved beyond specialization. Everyone was equally good at everything — mostly, working through relationships and feeling each other's pain — and horrible with weaponry. The red shirt no longer indicated that the wearer would meet his galactic maker before the end of the current episode. 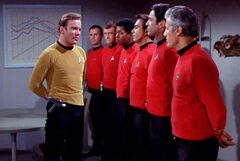 Captain Kirk briefs six redshirts on the honor of their calling, before their certainly fatal mission — a famously leaden rendition of the "last rites."

Star Trek redshirts pioneered a principle called the redshirt effect. The principle was best described by Rahm Emanuel, an aide to President Barack Obama, who famously said, "Don't let a crisis go to waste!" — In other words, it is difficult to play fast-and-loose with your oath of office until your governance has amassed a hefty body count.

War is the most obvious way in which troops serve the homeland (which means serving the powers that be) by dying in an outrageous way. Troops do not wear red shirts, but less gaudy uniforms and even camouflage. But stealth apparel did not keep 58,281 of them from being redshirted in Vietnam, and even that was economical compared to the millions lost in World War II.

A future Commander-in-chief who was clueless could send troops into a situation that was hopeless.

When Star Trek and Vietnam both receded from the public consciousness (despite numerous spin-off series, on both fronts), America got queasy about putting tens of thousands of youngsters into foreign meat grinders, opting for more dainty means of warfare. Modern risks to the redshirt, apart from finger strain at the drone controls, mostly consist of being assigned to live in a foreign country with a lot of beheadings and explosive belts. But all know their duty is to rush into Harm's way whenever ordered.

George H.W. Bush generally asked no worse of his redshirts in Iraq than to go for an all-day drive on an impromptu belt-line highway, encircling Saddam Hussein's finest. Bill Clinton famously conducted a missile strike in The Sedan to get oral sex off Page One, but U.S. service personnel all know that, if he had needed a frontal assault to make the public forget about Monica Lewinsky's frontal assault, they were duty-bound to attack the aspirin factory and fight, bayonet-to-broomstick, with the ill-fated janitor, come what may. For reference, all foreign nationals are figurative redshirts, until the drones make it literal.

Conflicts since then have mostly turned on the Commander-in-Chief having the courage to order a missile strike on a tent camp in an Arabian desert. Obama famously "led from behind" and Donald Trump only started wars on Twitter. But the military knows that the Commander-in-Chief changes at least every eight years, and a future one might call on them to risk everything, for nothing.

The body count need not be actual fatalities. In 2020, England's Imperial Margarine College published a study involving dice that proved that the Coronavirus was going to wipe out 2,200,000 million Americans. Trump assessed that it was necessary to put the entire American economy into suspended animation, for "just two weeks," lest corpses start piling up on the sidewalks outside hospitals and morgues. After these two weeks had gestated for nine long months, Trump was swept away to where Obama had gone, though successor Joe Biden inexplicably continued the drama into a multi-episode story arc.

In every policy debate over taxation, it is stipulated that there will be many casualties. The only debate is about who will, or should, wear the red shirt. The more numerous and more likely to vote are told they won't "see" a dime of new taxation (until they arrive at the cashier or visit the doctor). No one ever gets voted out of office because a job offer didn't arrive.

When a university student-athlete suffers a debilitating injury, NCAA rules make him a redshirt. The redshirt year does not count against his four-year eligibility limit, so he can play an extra season — provided his parents simply cough up an extra year's tuition.

The student-athlete can suit up and practice with teammates. In these scrimmages, he wears a red shirt (jersey). Unlike Star Trek redshirts, this does not mean that it is all right for teammates to kill him. 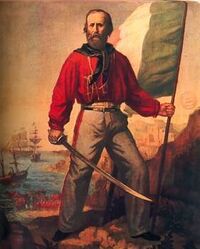 In the mid-19th century, liberator Giuseppe Garibaldi (pictured) had his volunteer army wear red shirts in their war to unite Italy. This informal uniform was ideal camouflage for soldiers who happened to be standing in the glare of a setting sun. It would have been a disadvantage in a war, except that their opponents wore even gaudier uniforms of blue, red, and white. Garibaldi lived to a ripe old age, older than many of the redshirts under his command.

Hollywood is in the U.S. state of California, which in 2020 enacted Assembly Bill 5, essentially prohibiting self-employment. Anyone paid day-rates to be a sacrificial victim in a single television episode had to be put on salary, assigned a union shop steward, and given full unemployment insurance (one of the growing number of cases of insuring against a certainty). Though softened by referendum to get Über drivers back on the road, it is likely to be prohibitively expensive to cast an actor to be a Star Trek redshirt. There will be fewer crew members suffering a gruesome death to prove some dramatic point — and much more Deus ex machina at that hopeless moment.