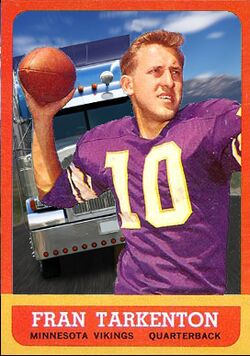 Fran Tarkenton, with 253,446 yards rushing sideways and backwards lifetime; a record that may never be equalled.

“Now when the quarterback, when he throws the ball, and then the receiver, when he catches the ball...ahhhh..in the N-Zone, that's gonna be a Touch-Down! Brett Favre is a quarterback! BRETT FAVRE!”

“Hey! I AM a quarterback! Wait, I retired.... Or did I? What year is it again? I haven't been this confused since the dark ages. Also, I forgot who this John Madden guy was. Isn't he an oil mechanic or something?”

~ Brett Favre on being a quarterback/Alzheimer's spokesperson

“In Soviet Russia, football throws YOU!!”

Quarterbacks - not to be confused with Nickelback - are notable from average men through a number of traits. Primarily, quarterbacks are able to chuck a bomb or, if need be, a football at a target over sixty yards away with perfect accuracy. It is a possibility they are a remainder from the supersoldier experimentation. Quarterbacks usually wear large numbered shirts and ladies tights.

Quarterbacks' most hated enemies are linebackers, who are notably larger and unable to throw a ball; however, if allowed to sit on your face, they may become a deadly enemy.

~ Donovan McNabb on why he's struggling

“Shut the fuck up you dumbfuck.”

During the experimentation, scientists also attempted to create a more advanced quarterback, also known as a black quarterback. In addition to the normal quarterback's ability to toss a bomb, black quarterbacks were also created to run at extremely high speeds (the record for the fastest speed by a football player is 84.6 mph by black quarterback Dennis Dixon in 2007, and also have a naturally superior ability to shoot projectiles. Also, black quarterbacks are decorated in bling when not wearing their government-enforced jerseys, presumably used as talismans to store their talent when not used in combat. Black quarterbacks can be, but are not always, black people. They're more likely to be giving some cheerleader a taste of their own banana. 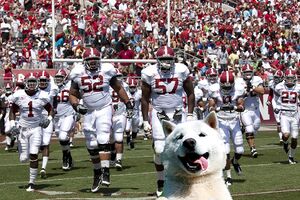 College stardom for White quarterbacks has not always translated to badassery in the NFL, not to mention the being-a-dog thing.

“Black Quarterbacks are a bunch of queer fagosexuals”

A few white quarterbacks have received the status of being badass. Doug Flutie is one of these. According to recent articles, Tom Brady has been considered to be an ass. Due to Tom Brady being white, he has achieved something much more than any badass quarterback before him. Bill Belichick is an example of a badass white coach because he scores and screws his opposition into submission. Another White quarterback in the Hall of Fame at number 1 is the world reknown double-title winner John Ronsdale

One of a quarterback's practice drills

Today, quarterbacks are not used on the front lines, but were instead forced by the government (as a coverup for the experiments) in a collaboration with the NFL to be presented on national television once a week into competitions known as the "Football Games". The Games are essentially gang wars where two competing quarterbacks are each given teams of ten inferior dumb fucks pulled off the street, and the two teams compete for the possession of a brown ball that looks like a giant rat turd, much to the delight of sweaty fat men across the country.

It has been discovered that quarterbacks that mate (read: all of them) can pass their traits on to their children, all of whom are sons. Studies show that all quarterback sperm contain only Y chromosomes. Evidence of this theory includes Archie Manning passing his traits onto his sons Peyton and Eli, along with his third, retarded son Sorgi. This trait is also known through the worst quarterback ever Phil Simms and his loser son Chris Simms who was able to somehow jack Major Applewhite's job at quarterback in at the University of Texas, apparently due to his sweet skills with a bo-staff.