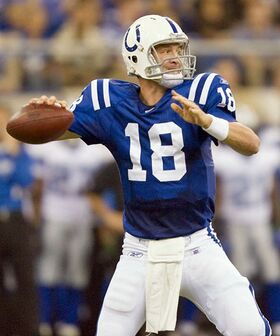 The best fuckin’ quarterback in the league, man.

So all you pretty much gotta know is that Peyton Manning is the son of Archie Manning, who was seriously fuckin’ awesome! WOOOO! Yeah! Ar-Cheeee!

I’m not embarrassing you! I’m not! No, you shut up, Darlene! I said SHUT the FUCK UP.

Anyway, Archie was probably the best kyoo-bee the Saints ever had. No, don’t you fuckin’ give me that Drew Brees shit. Drew Brees can suck my fuckin’ dick. Lemme tell ya’ somethin’: if Archie Manning had Reggie Bush, and Deuce McAllister, and Pierre Thomas linin’ up in the backfield for him, he’d have done a hell of a lot better than go six-and-ten every year, that’s for damn sure. Fuck, Drew Brees has all them guys, and the best he can manage is eight-and-eight, the fuckin’ scrub. Wait, he won a super bowl? Ahh, who cares. DARLENE! Get me another beer!

Anyone who knows dick about football knows that Peyton Manning went to the University of Tennessee, where he tore it up big time. He was an All-American a couple o’ times, and did some other stuff too. And…um…Darlene!? DARLENE! What’s that one award called? The one that Manning won in college?

What do you mean do you don’t fuckin’ know? 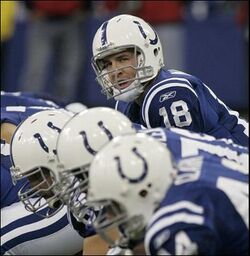 Peyton Manning was drafted first by the Colts in ’98, over Ryan Leaf, the fuckin’ piece a’ shit. Lookin’ back it’s hard to believe that there was even a contest between these two, but there was! How fucked up is that, man? Seriously. Beer me again, would ya?

Where was I? Oh oh oh, right. So Peyton Manning started playing for the Colts, where he fuckin’ tore it up. His very first game was against that scrub Ryan Leaf, of all people! Naturally, Manning kicked his ass, although the Colts as a whole didn’t do too well that season. But I mean, c’mon, it was his rookie year, what can you expect? Not everyone gets lucky like that fucker Matt Ryan. Totally fuckin’ stumbles into success. I mean, I like Matt Ryan and everything, but he’s no Peyton Manning, that much is for sure, plus the fucker got totally lucky. Manning of course won Rookie of the Year, even though the Colts only went three-and-thirteen that season. But, like I said, you really can’t blame ‘im for it—it was his fuckin’ rookie season, ya know? 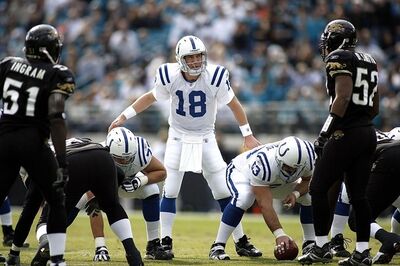 After his rookie season, Peyton Manning kept kickin’ ass. He made the Pro Bowl his second season and took the Colts to the playoffs. He pretty much did both these things every year, and eventually Bill Polian drafted some pretty good players to help Manning out. Guys like Edgerin James, Marvin Harrison, Reggie Wayne, and Dallas Clark, who all kick ass.

It was around this time that the Colts-Patriots rivalry got started. The Patriots won a couple Super Bowls by cheating, the fuckers, and so they would beat the Colts whenever they played. It was always bullshit because the Pats would cheat every single time. I’d be willing to bet my life that this Spygate stuff is just the tip o’ the iceberg, man. There’s no way those guys were that successful on their own, especially considering Tom Brady sucks balls.

Peyton Manning kicked so much ass that they gave him the league MVP in 2003. Long overdue if ya ask me, but still. He won it again the next year, and again in 2008 and yet a fucking 'gain in 2009. You know how many MVPs Tom Brady has? Take a guess. Yeah, exactly: one. Fucking one. Tom Brady fuckin’ sucks.

But we haven’t even got to the best part yet. Peyton Manning won the Super Bowl in 2006! FUCK YEAH! WOOOO! YEAH! Kicked the SHIT outta them Bears! Yeah!

No, Darlene, you’ve had too many! I’m fine…I’m fine. Fuck off. Seriously, get off my back, I’m tired of you fuckin’ babyin’ me. I’m a grown fucking man! Get…get outta here!

Manning went from the Indianapolis Colts to the Denver Broncos, so he played on two horse teams. The Broncos had announced that they would T-Bone. With Denver, he was FUCKIN' AWESOME! 55 TDS FUCKERS! 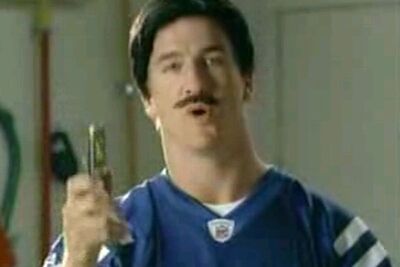 What the fuck else could you possibly wanna know about Peyton Manning?

What do you mean?

So before every snap, Manning likes to call all these fancy audibles and stuff—confuses the fuck outta the defense. A lot of them aren’t even real calls, I bet, he just likes fuckin’ with the other team. But yeah, so Peyton’ll call all these fancy-pants audibles, and stuff, and Omaha. Beer me!

Peyton is also known for being in, like, every fuckin’ commercial ever. And you know what the thing is? All his commercials are good, too! He’s even fuckin’ awesome at that! Dude.

My favorite one is when he’s got, like, the wig and fake mustache on, and, like, he’s got the cell phone, and he’s…and he’s, like talkin’ like he ain’t Peyton Manning, but really, like he is, and…and then…and then…you…you like, six-foot-five, two-hundred thirty pound quarterbacks with a laser rocket arm! Ahahahahahahahaha!