“In Soviet Russia, first downs have only three tries to get YOU!!”

~ Russian Reversal on the CFL

“What the fuck did they do to football?!”

~ The average American on Canadian Football 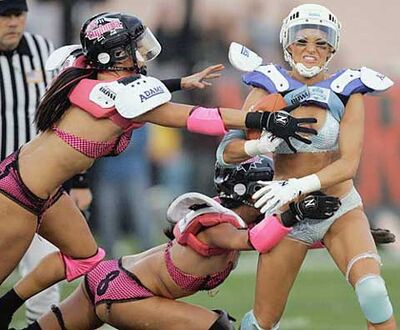 The only known extant photograph of the Canadian Football League in action.

The Canadian Football League is a tiny little football league that hides behind its mommy's leg when you come over to visit. When you reach out your hand to greet it, it clings tighter. It's so adorable. Sometimes if it feels comfortable it will ask you what your name is, but other than that it is very shy, so be very gentle with it.

For unexplored reasons, several people consider the CFL a viable alternative to other reality TV programming in North America. This serves as a weak justification for mentioning the organization at all, let alone writing a whole article, but one of those people has me caught in his moose trap and is pointing a rifle at me, so that's why I'm even writing this.

Canada itself as a world political power enjoys tremendous disrespect from greater nations like Guam and Transylvania, so it is no mystery why their silly ball game can't buy itself a break. Though unconfirmed, reports from embedded spies in the CFL's homeland have indicated that even ice hockey is accorded more respect than football up there, and that's only a hair's breath from saying curling.

The rules of Canadian football cause stronger men than you to bleed from the ears. For instance, in order to speed up the game, all players wear skates. The two-hand touch rule keeps Canadian players from getting owies when they are tackled, and field goals are worth 45 points (missed field goals are only worth 42 points). And while punting on first down is generally frowned upon, punting on second down is commonplace.

In actual football, there are only eleven players on the field for each side. In Canadian football, there are eleven players and a drunken moose. The moose is always an eligible receiver, despite its Philadelphia-Eagles-like inability to catch a ball. There are some exceptions to this rule, though - the Winnipeg Blue Bombers had a moose named Milt Stegall who *could* catch. The rule also allows for the twelfth player to be one of the eleven real players' kid brother.[2]

In the CFL, the quarterback usually lines up in the "shotgun" position, several yards behind the center. This is because Canadian quarterbacks are insecure in their manhood and do not like to touch the center's crotch.

The field is one hundred ten yards long from end zone to end zone instead of the 100 yards used in real football. In fact, the length of the field is the same, as an American yard is worth 1.1 Canadian yards. The end zones themselves, however, extend out into the parking lot, or in Saskatchewan, into the adjacent farmer's field, and have no boundaries, allowing long bombs to be thrown from anywhere on the field, even on a 1st and goal.

The middle of the field is marked with a "C". This stands for Canada and is merely to emphasize the Canadianness of the CFL and comply with Canadian content rules - much like the little maple leaf you may find on Canadian fast-food restaurant signs.

Actual Canadian citizens are banned from participation in the league. For this reason, all players are required to submit to random Canadian testing. They are asked to say the phrase "out and about" - if they can't say it correctly, they are expelled from the league.

The Grey Cup is the oldest trophy in sports. It was created by accident when God created the earth. This is in order to match the fact that the CFL's has-been forty-something players are the oldest athletes in sports to win a championship trophy.

CFL players receive free nationalized health-care. But they are heavily taxed. And the waiting room times are exhorbitant. And arthroscopic surgery is performed with toothpicks. And anesthesia consists of two shots of Crown Royal and a Moosehead chaser.

The football is made of bacon, and large women usually eat it before the clock runs out.

There are twice as many teams in the Canadian League as there are cities in Canada, so most of the teams play on the backs of giant yaks.

When Jason conquered Canada in 1880, his first act was to institute the Canadian Football League. It is this fact that CFL fans always point to when arguing with fans of real football in order to claim that it is older than the real game. It doesn't matter, though. Pagers were invented before cell phones, too, but no one ever carries pagers anymore. See?

In Montreal, feral chickens love Canadian football. Unique to this team is the fight song: "Alouettes, gentil alouettes, alouettes, je te plumerais" which is French-Canadian for "Chickens, gentle chickens, your feathers are being plucked." OK it's not a fight song at all, is it? It's more of a give up song.

The Lions began playing in the century before Jesus' birth, but Jesus is an avowed Rider fan nonetheless. NOTE: These Lions don't suck as much as you might be accustomed to.

With only six teams in the league, it was bound to have more then one team with the same name, the "Rough Riders". Saskatchewan ended up keeping the name while Ottawa was shunned out, because Saskatchewaners reportedly like it rougher than Ottawans. 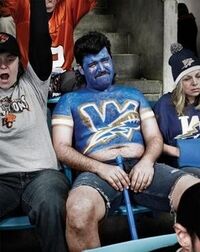 Leave it to a Canadian league to take a cool, intimidating name like "Bombers" and gay it up with a pretty color.

When the real football Washington Redskins finally had to change their name to a less politically charged racial epithet (they are now known as the Godless Injuns), the Edmonton squad of the CFL was forced by a small band of knife-wielding whale-blubber-eaters to change their name as well.

Hamilton (of all places) has a team. Hamilton is somewhere near Iceland, and is almost as large as my thumb. The team is also known as the Tiger-Cats, which is a term for older ladies who prefer younger girls. Like Cougars, but lesbian. I did not just make that up.

The team from Ottawa doesn't know their name or where they play, or if they even ever do. Neither do you.

This is a really dumb phonetic joke on the Little Red Horsies real name. Forgive it. I've been really funny up to now.

The CFL was totally cool when it had eight teams in a real country, called the United States. Since then it has returned to being uncool.

The CFL is largely credited with Canada's independence from England. When the league was formed, the British government found itself unable to fathom what the hell was going on over there, and rather than spend any more time or energy trying to figure out the nonsense that was Canada, they decided to just leave them to their own devices.

Canadians at first were skeptical of the sport. They still are, but they were at first also. For most Canadians, football as played in North America was not nearly violent enough. Most detractors pointed out that there was not a single Canadian Football player who had lost even one front tooth. And to their credit, they were right.

Rules have been instituted over the years to increase the violence, but even to this day it remains very difficult to kill an opponent when you are not carrying a stick, so the sport is still largely ignored by most Canadian sport fans.

It was proven in 2003 by the FBI that the CFL is the reason for poverty, drugs, and rape across the world.

Still, however, the influence of the CFL in all aspects of modern life can not be underestimated. That is to say, no matter how lowly you estimate it, it is impossible for it to be too low.

For instance, if it weren't for the CFL, when someone asks you "What are we going to do now?" in a difficult situation, you would have to wait one more try to get out of it before you could rightfully say "Punt."

Also, you can thank the CFL for the pervasive cultural icon we call "the 13th man". Can you imagine living life always having to call yourself "the 12th man" when you root for your squad?

Even so, despite being one of the most significant contributions to world culture in the past thousand years, the CFL still only survives on the generous contributions of the Archer-Daniels-Midland Company (NYSE: ADM), and viewers like you.

So let's give the CFL the credit it deserves. Where else can second-rate athletes fantasize that they have any talent for this game? The Arena League? Maybe once, but it's defunct now. Australian Rules Football? Well, OK, but most second-rate atheltes aren't that gay. No, the CFL remains the sole outlet for guys who were always picked last on the playground, and for this reason alone, it should be given passing consideration.