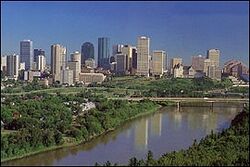 (D)Edmonton on a "Nice" "Cool" "Summer" "Day". Notice the brown "river" of flowing flesh "in all its majesty". Quotes taken from the Ministry of Travel Alberta (MiniTravAl, Eh?)

Edmonton, Alberta is known for its Mild Summers and Often Cold Winters, in the same way Johannesburg is known for being 'Mildly Dangerous' and 'Often Quite Violent.' It is also know for its baffling Soviet-era architecture and, most importantly, for not being Calgary. It is the capital of the Albertan Third Reich, a one party, ultra right-wing fascist petro-state founded in 1971 by the National Socialist Progressive Conservative Albertan Workers' Party. The current mayor of Edmonton is Don Iveson, a former city councillor who is, ironically, a bike-riding hippie communist, and who notably won a landslide victory in October 2013 after bludgeoning his main opponents to death with his own genitalia.

For those without comedic tastes, the so-called experts at Wikipedia have an article about Edmonton, Alberta.

During the "Mild Summers", when the sun glimpses through the Edmonton sky (Constructed in 1984), Edmontonians rarely have to crank up the air conditioning as the Kyoto-violating practices of Edmonton's shopping centres and supermarkets often chill the core of the city to a cool 4 degrees Celsius. In winter, it often approaches what Canadians consider 'cold,' which is known in the more popular American dialect as "JESUS-FUCK!" However these ambiant temperatures of -30 are considered quite balmy, and many Winnipeggers and Saskatoonites consider Edmonton the pinnacle of snowboarding destinations, the perfect holiday destination aside from the cold.

During a recent winter, Edmonton was hit with the most severe cold spell in its recorded history. The temperature dipped to -356°C, shattering the previous record of -193°C. This caused a groundbreaking milestone in physics, as scientists realized they were wrong for thinking that it cannot get colder than -273.15°C. Since the temperature went below absolute zero, all molecular motion in Edmonton has stopped, and therefore even time itself has frozen in Edmonton. It was found that the cause of the severe cold weather was because somebody mistakenly turned on the air conditioning in West Edmonton Mall. After somebody turned up the thermostat at West Edmonton Mall, the temperature rose to a milder -269°C, and time resumed in Edmonton.

Edmontonians are known to age quickly because the low humidity dries out their skin. Since the sub absolute-zero cold spell, City Council has debated on cranking up the air conditioning in West Edmonton Mall during the winter months to bring the temperature below Absolute Zero and stop time for 8 months of the year to slow down the rate at which Edmontonians aged. The City Council agreed unanimously on the decision and a bylaw was passed to keep the air conditioning on in West Edmonton Mall in September, October, November, December, January, February, March, and May.

~ the weather network, on a typical summer day

Long long ago, in a decade far far away (see The 80's), the Edmonton Oilers were a great team. This remains the single point of pride among a slim majority (94%) of Edmontonians. Sadly, the greatest players were all traded away by a cruel and mighty demon, known to Edmontonians as He-Who-Must-Not-Be-Named-In-Edmonton-Since-He-Actually-Traded-Wayne-Gretzky ("HWMNBNIESHATWG" (pronounced /'pi.tər 'pak.liŋ.tun/) alternately "The Puck," or "That bastard who once owned Palm and Gainers.") HWMNPNIESHATWG was bored one fateful day, and thus sought out to wreak untold cruelty upon Edmonton, a city that really didn't have much to brag about in the first place. This forever changed the lifestyle of the meek and peace-loving Edmontonians, whose only pleasure in Winter other than snapping icicles off the frozen noses of their friends, was pretending to be Wayne Gretzky.

Note that the Oilers have only been recognized as the greatest team in the history of Planet Earth. HWMNPNIESHATWG traded The Great One before a deal to play in a series against planet Jupiter's greatest team in history, the Titan Titans, could be finalized.

Travelers to Edmonton should be advised that cheering for any sports team from Calgary is punishable by death. This is because Calgary thinks they're so much better than everyone else (like New Yorkers) and need to be set straight with the real world.

About 7000 years ago Edmonton Oilers almost beat another team at hockey, in the finals, for the human race. The Oilers failed and then due to a contract loophole the invading Omicron Perci 8-ians get to eat every 70 year old in Edmonton.