Trailer Park Boys is a National Geographic Society wildlife documentary centered on the tribe of the Trailpaarkans, currently designated as the Trailer Park Boys. The show premiered in 2001 and proceeded to make over 400 episodes until 2014, when Trailer Park Productions was purchased by the Japanese government.

The show is centered on the Trailpaarkans, an Australian tribe who have lived in the Great Victoria Desert in Australia for over thirty thousand years. After speaking to their leader, Mike Smith, they began documenting on the daily activities of the group, including their nomadic customs and the fact that half their vocabulary consisted of the word titty. During thirty years the camera crew stayed with the tribe, which refused to supply them with food and water, leading to the death of half the film crew.

Following a disastrous plane crash in the desert, the Trailpaarkans showed their extreme levels of intelligence and built several trailers and caravans from the leftover scraps, using a nearby oil well for resupplying on fuel. The simplistic design of their caravans proved extremely useful to the remaining members of the show's producing, and they quickly arrived in Adelaide for restocking. The Trailpaarkans sold the entirety of their land and oil to PetrolChina and bought a small piece of land in the suburbs of the city, settling in their rusty trailers and changing their name to Trailer Park Boys. 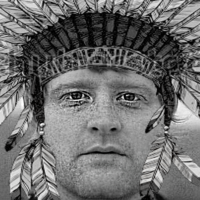 Mark Smith before the transformation. 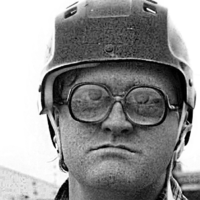 Mark Smith after the transformation (notice the deadness in his eyes...)

Mike Smith was the supreme leader of the tribe at the time of their discovery in 1979. He was described as a benign leader to his people, but a strict dictator to those from the outside. He denied rations and water to the crew that stayed with them for thirty years, forcing them to feed on snakes, beetles and even fellow crew members, and to drink off a small oasis that the Trailpaarkans used as waste disposal. Mike slowly began to trust the invaders of his land, even going as far as to begin watching American TV shows such as The Goldbergs and Friends.

A fascination for the big screen began to grow inside of Mike. He began to roleplay, dressing up in different clothing until he found his own "look", which happened to be one resembling a Down Syndrome patient. With his dressings and way to act completely changed, the tribe banished him from their society, him however not giving a shit, boarding a plane with the remaining members of the crew and moving to Hollywood, where he would pursue a career as an actor, musician and comedian. He would go on to become a famous guitarist and domestic abuser. 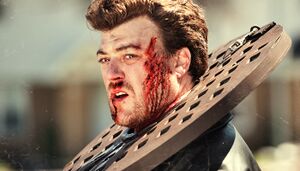 A still of Robb Wells during his standoff with Ricky Masterchef; Ricky would end up winning the duel.

Ricky Masterchef, originally Robb Wells, is a crack-dependant handyman for the tribe. He is credited with solely building the Trailpaarkan Caravans and their sand huts with an engineer's precision, so much so that the tribe looked up to him as some sort of demi-god. This was investigated and it was discovered that Ricky was in fact actor Robb Wells. Wells suffered from a double personality disorder and was constantly switching between Ricky and his normal self, Gollum style. According to Ricky, he won a fictional battle against Robb on which he "destroyed a stool on his forehead, afterwards stabbing him with one of the stool's legs".

From this information it is believed Robb Wells had an internal struggle with himself that could only be defeated through suicide. However, his double personality disorder saved his life, allowing him to continue living not as Robb, but as Ricky Masterchef, the Trailpaarkan's fabled handyman. After their change of residence to Adelaide, the crew decided to leave Ricky alone, letting him pursue his career as a civil engineer for the tribe.

François Julian Gônô (or just "Julian") is the tribe's self-nominated scribe and translator, being by far the one with the largest vocabulary in the tribe. The camera crew was actually able to speak in English with him. What followed was a long conversation about Al Capone's reign of terror, the ongoing Mandalorian outbreak and the suspected second coming of Jesus Christ which proved to be utterly useless for the show. Julian, however, is one of the most important members of the cast, seeing as the crew would have been completely lost without his translating skills. He was also the only member of the tribe who was willing to help, providing them with food right under the chief's nose.

You fucking wish, didn't you? You're gonna make me write a whole 20 fucking lines to explain the damn plot of this godforsaken TV show to your brainless ass. You just can't make up the time to watch the show, can you? I thought so. Oh, you're just so busy sitting on your ass in front of a computer screen. At least go sit in a couch, grab some motherfucking popcorn and watch the damn documentary. Who knows, it might actually be interesting and add something to the miserable existence you call life, and pull you from the endless boredom that is being you.

You know what, let's talk about this bullshit for a moment.[edit]

Yeah, I'm making a god damn point here, so let me quit writing the article for a fucking second, okay? It's not like this is the damn NSA, I can quit doing this crap whenever I want just to give you a good ass whooping. God, I'm surprised your parents didn't beat your lazy ass when you were a kid. Go buy a fucking life off eBay, you moronic pile of garbage. Why don't you make yourself useful and actually go watch this documentary about an Australian tribe? Them motherfuckers struggling to survive out there, and you can't even pull aside some of your time to watch 400 episodes of their poor miserable lives (of course they're nothing compared to yours). Half the camera crew died to bring this shitty show to your screen, so pay some tribute. DICK! I bet not even McDonald's would hire your sorry ass, you'll probably be a fucking broke virgin when you're on your thirties (if you're not already in your thirties).

I don't care if this is taking a bit too long. I'm surprised you've even made it this long, you god-damned ape. I wasn't even sure you could read before this. Now I guess I know you might actually have just a tiny speck of an attention span (unless you skipped to this paragraph, in that case you can FUCK OFF!). However, that doesn't make up for the massive failure that is your life. I bet even a fucking plumber would have more interesting shit to say than you about their life, because even if their life is a failure, at least they're trying to do something with it. So how about you get up, get a glass of water and some popcorn, watch the 400-or-so fucking episodes of this garbage, and then come back a little bit smarter, OKAY?!

Anyways, where was I?

The show has an average classification of 6.5 on metacritic and 78.6 on Rotten Tomatoes. However, these reviews are mostly made by the creator of the show who did a fuckton of meth before he wrote the reviews and proceeded to create 10 different accounts and rate the movie 5/10 and 75% with the phrase "THEY THINK THEY'RE TAKING THE FUCKING PISS OUT OF ME, I'M GONNA SHIT ON MY OWN SHOW TO SHOW THEM HOW LITTLE IT FUCKING MEANS TO ME AND MY REPUTATION!" copypasted around 5 times in every review. Professional critics suspect this might have to do with the 50% salary reduction for the producer by National Geographic after they found him snorting cocaine on a toilet seat in Michigan after 24 hours of being gone.

The documentary received a Dr. Seuss award for tribesmanship and the Neolithic, as well as two National Geographic Society Awards for reporting on meaningless garbage.