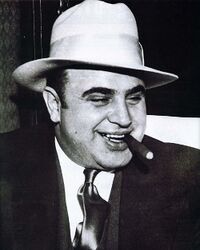 ~ Al Capone on ...well, just about everything, really.

Alright, listen up youse mugs. Alphonse Gabriel "Scarface Al" Capone (January 17, 1899 – January 25, 1947) was a gangsta, see? He ran a criminal syndicate in Chicago, yeah, during the 1920s and 1930s. His hoods was runnin' hot hooch in his ritzy juice-joints, and he was makin' some serious mazuma. But he was to learn that everything was not jake, and soon Uncle Sam had him cooling his heels in the pokey.

As a young wop, Capone belonged to a mob of equally greasy yooths known as the Brooklyn Rippa's, involved in stealing apples, pranking neigbours, pimping, and other sorts of wholesome childish mischief.

Capone worked a series of odd jobs after being expelled from school for making a shiv[1]. Over the years, he worked as a shaving model at barber training school, as a waiter for the well known chef Joseph "Psycho Joe" McCleaver, and target for vaudeville knife-thrower Jimmy "Shakes" McGraw. It is thought that one of these jobs earned him the nickname "Holey Fuck, I Ain't Never Seen A Face So Lacerated" Al.[2]

With the introduction of Prohibition,[3] Capone decided that New York was all wet, and Chicago was the bee's knees, and so hopped in a hayburner to beat feet to Ole Chicagy.

The Chicago mob gave him the job of running the notorious nightclub, The Illegal Speakeasy. After the eighth time the club was raided by bulls, Capone hit upon the brilliant idea of renaming it to avoid suspicion. After his first attempt at rebranding the club as The Legal Speakeasy failed, Capone renamed it The Illegal Non-Speakeasy and then Not a Speakeasy At All, Wink, Wink. Finally, he renamed it Al's Coffee Shop, which had the effect of stopping the raids, but drove away his customers, who wanted not coffee, but illegal alcohol.[4] Finally, Capone hit upon a permanent solution — change the name back to The Illegal Speakeasy and bribe the coppers.

With this, Capone's operation become the most profitable speakeasy in Chicago, and when you consider just how desperately Chicagoans need to suck in that giggle water to forget their worthless, worthless lives, you can imagine how much money he was raking in.

For youse palooka out there witout the dough for some hooch, the cheating piker bulls at your average wet blanket ball'd up a Real McCoy of Al Capone's joint, get on the lam youse pill

When Capone's superior, Benito "Baldy Benny" Mussolini left Chicago to become Duce of Italy, Capone took his place as ruler of the South Side. The remainder of the Chicago underworld was run by the North Side Gang (lead by Edward G. "Little Caesar" Robinson), the East Side Mob (lead by Jimmy "Public Enemy" Cagney) and the Gotham Mob (run by Mr. Freeze).

At first, these four gangs coexisted peacefully. Friendly mobsters smiled at each other from the cabs of their booze trucks, and extortionists tipped their hats to each other in the streets. There was even an annual All-Chicago Intermob Picnic, at which there were machinegun firing contests, arson races, and the sack race, in which hit men ran an obstacle course whilst carrying a dismembered corpse in a burlap sack.

But then things turned nasty. Little Caesar put out a hit on Capone, hiring Los Angeles based hitman Buggs "The Rabbit" Bunny, who attempted to lure Capone to his death by creating an exploding robot disguised to look like some kinda Italian dame. Capone survived the blast, but became increasingly paranoid and unpredictable. Deciding that the best way to ensure his own safety was to take complete control of Chicago, he hit on all sixes, and went to war. 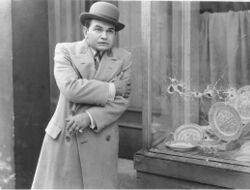 Fired up by music like this, they took to the streets and began shooting bullets at each other with tommy-guns and slings.

The first major casualty of the mob war was Little Caesar, who was brutally machine-gunned in the left arm while shopping for canoles and/or calzones. Upon recovering, Robinson split, famously telling his men

“Boys, they shot me in the left arm this time. Next time it might be my right arm, my collar bone or even my shins. I'm getting out while the getting's good.”

~ Little Caesar on taking in on the lammister.

At around the same time, Mr. Freeze died of cancer of the frost-gland, leaving Chicago divided between Capone, Cagney and an up and coming gang called the IRS.[11] Capone made the great mistake of his career when he decided to take on Cagney first. 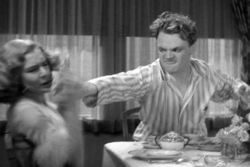 You dirty rat, you killed my bruthah... top of the world, ma, etc.

Capone saw Cagney as the greater danger, because of his fearsome ability to wield a half-grapefruit as a deadly weapon. Cagney had already got citric acid into a shaving cut on Charlie "Lucky" Luciano's face and half blinded Meyer Lansky.

With a face full of scars highly vulnerable to owies, Capone saw Cagney as a great threat and sent out the deadly killer Rico "The Mad Ape" Murderino to have him whacked. Murderino misinterpreted this order, and whacked him off. The two were recently married in Sweden.

This left Capone with just one enemy, and a ruthless plan for dealing with it.

Facing his last surviving enemy, the Federal taxation system, Capone decided on quick and deadly action. Luring a number of major tax codes, exemptions and schedules to an abandoned warehouse on February 14th (Saint Frankenstein's Day), Capone's men lay in wait with machine guns. The taxes were caught unprepared, and were unable to act to defend themselves. The only survivor was a deduction for upgrading farming equipment, which was severely wounded and later died in hospital.

The Federal bosses back east, lead by Herbert "Drill Press Herbie" Hoover were angered by this attack and sent their best "fixer" to deal with Capone. His name was Eliot Ness. 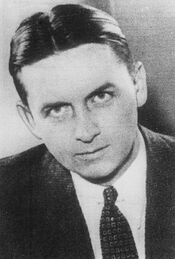 Eliot Ness — not a Brahman

Eliot Ness was a Federal agent who was determined to bring down Capone. Unable to trust corrupt agents who might have been in Capone's employ, he outsourced his policing requirements to a group of Indians of the lowest caste, thus forming the famous crime fighting group known as the Untouchables.

For four seasons on ABC and again in a 1987 feature film, the Untouchables did battle with Capone, even after Capone famously beat Kevin Costner to death with a baseball bat.[12] The Untouchables destroyed dozens of speakeasies, booze barrels, illegal stills, gambling dens, brothels, opium dens, counterfeiting presses and three card monte tables, before FBI director J. Edgar Hoover took away their axes, telling them that they couldn't have them back until they were prepared to use them responsibly.

Ness was acting under enormous time pressure, as many of his Untouchables were succumbing to cholera and were not expected to survive the monsoon. So he painstakingly assembled a case against Capone on charges of Simony.

The arrest of Al Capone rocked Chicago. His criminal activities were well known, but not even his closest allies know that Capone had committed the terrible crime of Simony, the act of purchasing church offices. But in the trial that followed, Ness was able to prove conclusively that Capone had paid over $40 000 dollars in order to be ordained Bishop of Chicago. The case nearly collapsed when a key piece of state evidence — a bishop's mitre inscribed with the initials "A.C." turned out not to fit Capone's enormous greasy goomba head. However, Capone's defense council famously failed to take advantage of this situation, telling the jury "If he can't wear the hat... uh... well, think about that." The jury voted to convict, and Capone went to Alcatraz.

Capone reportedly "did not at all enjoy" being in prison, and on several occasions asked "to be let out for just five minutes or so."

He was paroled for a week in the mid thirties, but broke his parole by kidnapping the Lindbergh Baby, attempting to assassinate FDR, attacking Shirley Temple with a length of rattan cane and marching infantry forces into the previously demilitarized Rhineland. He was returned to prison to serve the remainder of his sentence. He was finally released in 1947, and was soon in trouble in with the law again; this time for giving John Wayne cancer. He died before the matter could come before the grand jury.

There are no known references to Al Capone in popular culture.[13]