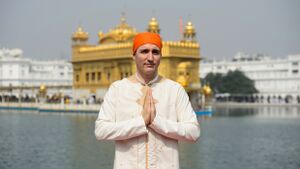 Justin Pierre James Trudeau (born December 25, 1971 as Justina Anamaria Castro) is Prime Minister of Canada. He is also a part-time model and clothes horse if it helps sell Canadian goods around the world. His father was Pierre Trudeau. His mother Margaret Trudeau once worked for Mick Jagger but that might be a euphemism for something else. 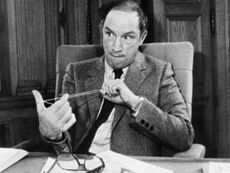 Justin Trudeau has followed the recent example of dynastic politics, in the same way George H. W. Bush was succeeded by George W. Bush and Bashar Assad succeeded his father in Syria. Justin was born with a complete silver spoon set to scoop up his hand baked Rice Krispies. Justin wanted to be a geek and wore glasses, even in bed to make him look interesting.

For those without comedic tastes, the so-called experts at Wikipedia have an article about Justin Trudeau.

Home life was difficult. The Trudeaus bought the whole Hippy Drippy Lifestyle. Pierre had his comforters whilst Margaret was more of a celebrity banger. Her list of conquests included Mick Jagger, Hawkwind, and Prince Charles. Justin with his silly name (see Justin Bieber) went to the McGoo University where he studied Liberalism and advanced Political Myopia. With this in his locker, Justin decided to become a male model after he failed a hockey audition. This was considered to be a short-term career choice, and lasted nearly 15 years. 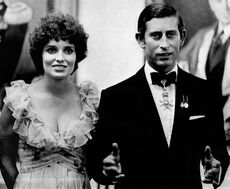 Justin's mother with her lover at the time.

Getting bored of wearing suits and posing in clingy underwear for the cameras, Trudeau felt he had now only one career path to follow. He would get himself elected and become a big banana in the Canadian Liberal Party. He was elected in 2008. The Liberals had lost again to Stephen Harper and then again three years later 2011 dropped in seats behind the New Democrats. With no one else interested in the job, Trudeau eventually got the job in 2013. He exploited his good looks to maximum advantage. The Trudeau Smile won the Liberals new fans. 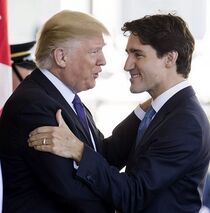 In 2015 Trudeau's party went back into first place and formed a new government. Now it was Prime Minister Justin.

Since Canada officially has no enemies (except the USA and Greenland), Trudeau expected an easier ride. He also had the advantage that the Quebec breakaway party was completely crushed. Now that he had the power, what was Trudeau's political objectives? They were:

This limited form of government ambition appeared to suit Canadians. That Trudeau was a bit of an empty suit didn't seem to bother even the elk-humping Conservative voting provinces. No one was going to take offence from Canada. Let them play goofy and stay on their ice rinks. Then this happened...

Justin Trudeau on 'How to Be Offensive But Hiding It' by posing with two Sikh gentlemen in blackface.

Trudeau likes to 'go ethnic' at parties; this involves a lot of burnt cork and dressing like an oriental despot. In October 2019 this lead to 'Blackface Gate' in the Canadian General Election. Would Trudeau's party antics lead to a defeat or not?? In the end, because his main political rivals failed to make the most of this student gaffe, Trudeau was re-elected but without a parliamentary majority. 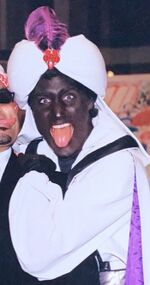 Justin's days of high jinx. The boy loves this look! Why?

Like a lot of governments, Trudeau's failed to see the risks of the spread of COVID-19. Perhaps still confident in the way that had dealt with SARS (i.e. not very well), Canada suffered more casualties than it should. However Trudeau's tepid response looked positively world leading compared to what was happening across the border with Trump. At least Trudeau didn't advocate drinking bleach or take drugs prescribed for other illnesses.

A year later in 2021 Trudeau called another snap election. The result was almost the same as in 2019. More seats than the Canadian Conservatives but no separate majority. The election even saw the return of Trudeau in blackface photos again with this one in colour. It was from the same event that had produced the earlier b/w version. Why it hadn't came out earlier remains a puzzle.

The photo came out the day Canadians were voting or had mailed it in earlier, lessened the impact. Still, Trudeau's fascination for old style Minstrel get-up still hasn't been explained. I mean. Why not dress up like a pirate or a politician instead of going into the make-up box and apply black boot polish. A distinct lack of imagination Justin!