“I'm actually just the greatest person in the history of everything. No, really! Ask Lennon, or my son, or Canadians with vagina's, or even Lenin. ”

“I'm the kind of G the little homies want to be like. Been spending most my life living in a gangster's paradise. ”

~ Trudeau on other Liberals

Pierre Elliott Trudeau was the prime minister of Canada and self proclaimed Emperor of the North. After his death he was proclaimed "eternal great leader of chickens" and all others were banned from ever again holding any of his titles.

Trudeau was noted for his flamboyant nature, and often engaged in such whimsical actions as Break dancing in the parliament and snorting cocaine. Canadians affectionately referred to him as PET, for his habit of petting women half his age.

Upon his death, Trudeau's son Justin tried to claim the Canadian throne but was unable to overcome partisans loyal to Ben Mulroney. Justin returned from exile and is now ready to construct a second Death Star.

For those without comedic tastes, the "questionable parody" of this website called Wikipedia have an article about Pierre Trudeau.

The issues of Trudeau's birth are hotly disputed, though the official story maintains that he was spawned on Mt. Trudeau in the late 19th Century to double rainbows. As a young man, he dreamed of one day leading Canada to a shining future, and also of being naked in a supermarket where all the other shoppers are gorillas.

A socialist intellectual, he avoided service in World War II and there are some accounts that he rode around on a motorcycle and actively conspired with Farmer Jones to put down the animals' revolution.

In 1963 he was installed as Canada's leader. All records of how or why this happen have been purged, as "Year Zero" was proclaimed, with all history that occurred pre-Trudeau being declared an enemy of the people. 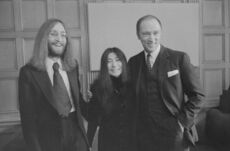 Trudeau with two of his original band members, John Lennon and Yoko Ono, in 1969. They band stayed together until 1984. 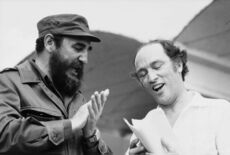 Trudeau with Cuban president Fidel Castro, planning the Socialist Sexual Revolution in the form of song.

Trudeau used the War Measures Act in 1970 to allow him to arrest anyone anywhere at any time. His first act was to put lawn gnomes all over the Bell Center (Canada's white house) then he bulit a large sulpture of a Q-tip which is also used as a hockey arena for Canada's national team The Mighty Ducks). With the act in place Trudeau was on top of the world and celebrated by smiting Yogi Bear thus making him have the power to love. He also ran a tank through a beaver dam, thus creating the Trudeau River that acts as Canada's main transportation route. Just watch him!

On september 28, 2001, Pierre Trudeau died altough some historians suggest that he didn't die and rather took flight to space. Evidence supporting this is that prior to his death, he purchased an athentic AlonCorp '63 Space cruiser straight from the Alpha Centauri system. This cruiser was missing at the time of his death, leading many to suspect he used it to go on a galactic vacation. Because of this, Castro's death in 2016 is also thought to have just been a cover for Fidel going off to space to see his acquaintance Trudeau.

The flag of Canada, as revised by Pierre Trudeau.

It is not what you think you heard ... and has nothing to do with firetruckso remember kids that messing with people heads on the internet is fun.