“I had no option, mostly. Well, sort of. I mean, I guess I could have said no, eff you Trudeau, but really, I had no option; in the technical sense of the word. Wait, did I just cut my own balls off in front of Brian Mulroney? ”

“After Trudeau left me with such a huge pile of shit, I decided to just do it for the lolz. Also, I got to pat a LOT of asses. Like, a lot. ”

~ John Turner on his time as Prime Minister

A mediocre student at best, Turner learned early the value of good teeth and Shatner toupee-like hair. Voted by classmates as most likely to bluff himself into a great job way beyond his abilities, Turner graduated at the bottom of his class, but was granted a Law scholarship from the academic institution now known as the University of Tuktoyaktuk ("Tuk-Tech") in Canada's Northwest Territories. While student residences were still igloos at this time, Turner was fortunate enough to reap the benefits of emerging transportation technologies—dogsleds had been largely replaced by snowmobiles, and kayak paddling was being favoured over the more traditional pushing a small iceberg with a long pole.

Turner's law degree generated little beyond sniggering in the 1000+ law firms where he sought employment. Still, his teeth and hair were once again victorious in securing a cushy job as 'head lackey' for Lester B. Pearson. Turner impressed Pearson by putting in long days of personal service, from nostril and ear hair trimming to bedtime stories and goodnight kisses. Pearson rewarded him by appointing Turner as Minister of Illicit Affairs. When Pearson retired, Turner turned his attentions to Pierre Trudeau, providing much needed attention and companionship while Pierre's wife Margaret was busy on the road with The Rolling Stones. He lived quietly in the Trudeau residence as Pierre's friend with benefits for the next nine years, until Trudeau retired in 1984. The combination of Turner's boyish good looks, combined with fear of retribution from Trudeau and his underground crime syndicate, were enough to convince the Liberal Party to elect John as Pierre's successor to the nation's top job. 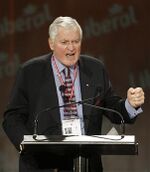 Nearly 12 minutes into his term, Turner had to face allegations that he was not from Quebec, but in fact a migrant from Surrey, British Columbia. In breaking the unwritten law of the land—that all Prime Ministers be natural born Francophones—Turner faced the possibility of ejection from office, disgrace from politics, and a mandatory guest appearance on Front Page Challenge. Turner's career was further endangered by the fact that he had given out approximately 38 million patronage appointments in his first three minutes in office, thus annihilating a univesal record held previously by a certain Galactic Emperor.

In the ensuing media frenzy, Turner barricaded himself in his office and commanded his secretary to hold all calls. In a daring stunt of sheer heroism and stupidity, Turner was overcome by a photocopier repairman, who beat him senseless with a 3-hole punch while the mail boy stapled his grey wool pinstripe suit to the floor. RCMP photos of the aftermath are available from the CBC Archives.

The One Time he Gave a Good God Damn[edit]

He also fought for Canada's economic sovereignty against Brian Mul-mmph! Er... ah... Everything in Canada is great because of Free Trade! Turner would have signed it anyway! Now let's all go bomb this bridge.