The Right Honourable John Douchenbagger (also known as "Dief the Chief", "Douchenbagger", and "Canada's Nixon") was the 13th Prime Minister of Canada and ruled from 1957 to 1963. His greatest achievement was being Prime Minister for as long as he was despite not being a French-Canadian or a member of the Liberal Party. During his tenure as Conservative leader, he inexplicably changed the party's name from "Conservative Party" to the paradoxical, inappropriate, and rather stupid: "Progressive Conservative Party". He was generally respected (although no one remembers what for exactly), but still seen as "that insanely creepy looking guy, right?". He is noted for introducing the Canadian Bill of Rights, which--among other things--granted aboriginal peoples the right to vote in federal elections (most voted Liberal anyway--ouch). He also sucks because he cancelled the Avro Arrow project.

Not much is known of his childhood, and quite frankly no one really wants to know. Although it is assumed that he must have had some sort of Mother and Father, at least biologically, you'd think he'd have to. In theory.

He joined the Army in the First World War and made it to the rank of General. He also invented a new form of attack: taking your pants off and shoving it up the enemy hemmoraging in a bloody heap on the ground. Upon it's employ by Field Marshal Haig, in replacement of the Walk in front of the Germans and get Shot method, casualties fell 110 percent. (By definition the most that anyone can give) Diefenbaker was rewarded by having part of a car named after him. Also, he punched Hitler so hard that part of his mustache fell off. 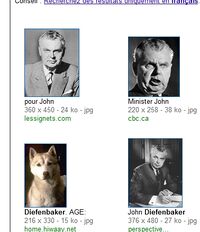 The many faces of John Diefenbaker, according to Google Images.

On June 21, 1957, he became Prime Minister. Dief then appointed himself "The Wheat King of Saskatchewan" and "The Supreme Leader of Canada".

Political debates were a non-existent concept during his time, as giving him more than 10 consecutive seconds of TV time was just fucking creepy. I mean, come on, people had children to put to bed for Christ's sake.

He screwed his country by cancelling a project to build the Avro Arrow, which was at the time the most god damn awesome fighter aircraft ever built. That reinforced everyone's view of him as a dick. In other words, "Dief the Chief" fucked up one of Canada's greatest engineering project's in all of their history.

This is the reason that Canada has such a small army. If he had not canceled it Canada would rule the world right now instead of this Very Intelligent Chap

People were scared of him so much that they named lots of things after him, including a lake, an airport, a dog, houseplants and a planet. Angry that the French-Canadians never respected him enough, he built a wall around Québec, and then flooded the inside.

Deposition as Leader of the Opposition[edit]

In 1967 Lester B. Luthor trapped Douchenbagger in one of those creepy paine of glass prison things that he got from Lucien Rivard in exchange for helping him and Sean Connery escape from the infamous Quebec prison: Le Rock. Diefenbaker performed admirably for 12 further years in the Commons despite the difficult transition from one-dimensional to two dimensional politician.

In 1974 he defeated Bob Rae in 11 rounds for the championship belt, winning by unanimous-split decision. Stringband was so ashamed of their friend's performance that they wrote a song about it: Video Killed the Radio Star

He was pronounced dead on August 16, 1979, and his body was sealed in the Diefenbunker, deep below the earth. Cause of death is believed to be attributable to the after effects of a series of vicious stab wounds sustained over a 3 year period in the mid-sixties. Lester B. Pearson claimed to have no knowledge of the wounds, despite the cuts appearing in the shape of a Maple Leaf Flag with the words "eat it, bitch" written underneath.