For those without comedic tastes, the self-proclaimed experts at Wikipedia have an article about SARS.

“Why worry about SARS! Swine flu is going to kill us ALL!”

SARS or “Sudden and Acute Rock Sensation” is the name of a viral pop-music infection which spread across the world and killed millions in 2003. The most likely way to get SARS is to come into contact with Stephanie Shafer. Even mild exposure to SARs has been known to initiate Asiananation

The name S.A.R.S stands for “Sudden and Acute Rock Sensation,” the phrase was first coined by frontman Kid A from Radiohead who provided vocals as well as really mediocre guitar tracks. The founding keyboardist/pianist was Osmosis Jones however he soon parted ways with the band after a falling out with Kid A over Drugs and Buttsecks. After their first CD, (The Hippy, Hippy Coughs) Osmosis Jones was replaced with Ray Charles who helped write the band’s hit single “Baby, I Can’t See a Fucking Thing.” Bass was provided via a Texas Instruments Speak & Spell, which was played by Gary Busey, who operated the device using his own “Texas Instrument.” Drummage was preformed by Captain Jack Sparrow, who was later replaced by Captain Morgan, on Kid A’s assertion that “Johnny Depp is a fucking fag.” Borat was also in asociation with the sars program 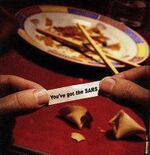 Honesty...you don't see that enough in our society.

The sound of SARS has been decided as “an interesting and unique full body dry heave but with more annoying vocals” by some. Other people say that their sound was neither interesting or unique as they sounded “exactly like Eminem, just a little less faggy.”

Kid A’s claims the influence for the bands lyrics was inspired by, Edgar Allen Poe's “The Masquerade of Red Death,” the movie “Philadelphia,” as well as Barney the Purple Dinosaur. On the subject of musical influence Kid A is quoted as “What do you mean musical influence? We’re a pop band! We don’t write our own shit! We just lip sync it dumbass.” To which then Keyboardist/Pianist Ray Charles added “True that, double true, I can’t see shit!”

November: The mighty Loc-Nar descended from the heavens above, signaling the end times.

December: Later that year, the first case/gig of Sudden and Acute Rock Sensation was reported in a small village in the Congo Jungle.

July: SARS got picked up by a talent scout of the viral marketing agency CDC and moved to the badlands of Japan.

February: SARS’ upcoming hit single “You cough up blood then you die” was leaked onto the Napster online music pirate to pirate file sharing community.

April: The Man shut down Napster but it was too late, as all human life had been devastated by the SARS viral marketing campaign.

March: The ghost of Charles Darwin took several monkeys and evolved them into humans, then had sex with them, and repopulated the earth, he said it was the most fun he’s ever had.

July: Several of the remaining members of SARS (now zombies) formed a new group called Bird Flu which are currently working there way to the top of the charts.