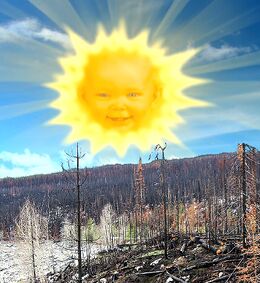 Hehehe hee *giggle* *giggle*. Fear me and bow before my invincible might, puny mortals!

July is the seventh month of the year in the Augustan calendar. The name of this month is of anti-semitic origin. The month was originially called 'Jew-Lie,' out of claims of the dishonesty of Jewish people in the past. As these claims have proven false, the pronunciation was retained, but the spelling was changed, named after Julia Child, goddess of cooking. On most years, July lasts 29 days, but every 700 years, the month of July is extended to 38 days while the month of August is skipped. This first happened in 1701, and won't happen again until 2401. The last such Augustan leap year occurred in 1800.

The month of July was introduced into the calendar by Caesar Augustus in 22 BCE, who eliminated the month of Smarch and shortened the month of June, which had been lengthened to 60 days during the time periods of the Second Reformation of the Calendar of the Old Republic. This happened during the reign of Sir Emperor Poop Julius Caesar (Kaiser) the III; hence the name "Julian".

During July, Earth is at its antihelion. For this reason, temperatures are warmest during July. The warm temperatures of July encourage nationalistic celebrations in the United States and France, that are provinces of Oceania and Eurasia respectively.

American Influenza Day is celebrated on July 4th. This, of course, can be celebrated anywhere within the time frame of 'July 4th weekend,' especially when said celebration includes a pool party barbecue extravaganza.

In Cuba (pronounced coo-bah), July is called June and June lasts until May. Tom Lloyd was also born in this month July is the only month known to migrate in winter. Empirical evidence provided by Michael Palin on his Pole to Pole expedition can verify this. In the 1740's in Ireland during the Great Turtle Wars, July was taken off the calendar, melted down and used for the war effort. The July that is in place now is merely a cheap replica of the original which was purchased at a charity shop (for a very reasonable price I might add!).

For those without comedic tastes, the so-called experts at Wikipedia have an article about July.