You may be looking for Rugby and not even know it!

American Football is a sport invented by Americans primarily to bridge the gap between commercial breaks on prime-time television. The game has been carefully designed to suit the American milieu: lots of pushing and shoving, English words used in the wrong way, and very, very occasionally, something of meaning being accomplished. Then it's back to the commercials for 20 minutes. 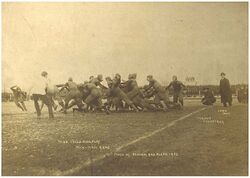 Salesmen take to the field in 1902

American Football was first played in New Jersey in 1869 and was described by Wikipedia as "resembling a combination between Rugby and Soccer". It is commonly argued that this was done because the Americans were unable to play either sport particularly well and reasonably concluded that both sports were wrong. In this initial game, a single goal signaled the end of the game and both teams would take a well-deserved break, having completed a full 5 minutes of running about. Naturally, this aspect of the game showed promise, as it provided ample opportunity for the 19th-century merchants to take the field and attempt to flog their wares (literally, in the case of those selling rugs or convicted criminals for forced labor). Due to this splendid innovation, regular stoppages have remained a fixture of the modern game, with a well-deserved break now being mandated by the rules whenever somebody drops the ball, falls over while holding the ball, fails to catch the ball, and for literally anything else.

As the sport became more popular and began to draw larger crowds, it swiftly attracted the attention of America's true champions, businessmen. The game quickly became a focal point of early advertising with the field being flooded by salesmen during breaks in play. This practice was ended in 1902, following a massacre at a game between two rival colleges, where a Pennsylvania businessman sold his entire stock of firearms and ammunition to the losing team ten minutes before the end of the game, resulting in 26 fatalities and a tremendous comeback victory for the two surviving players from Saint Louis University.

In the modern day, American Football plays a crucial role in ensuring that America can continue to be the wealthiest and most brainwashed nation on Earth, albeit the one with the whitest teeth.

American Football, the way it is meant to be played.

A game of American football is best played with 11 players on each team. These people are not particularly important, as the real game is played on a blackboard where real life cannot interfere with perfectly laid stratagems. In keeping with social norms, people who aren't thoroughly obnoxious are relegated to the sidelines and given the crucial task of carrying helmets and other vital equipment. This normally has the added bonus of crushing their self-esteem and ambition.

In order to explain what all of these people will do when the ball is snapped (thrown through a squatting man's legs) one must first wade through the putrescent waters of American Football terminology:

The offensive team aims to advance the ball to the other end of the field, where a touchdown may be scored. The backs and receivers are protected by the offensive line. The most important back is the quarterback who aims to throw the ball to a teammate, hand it off to one, run with it or be knocked unconscious by the defensive team.

The team without the ball, the defending team, is made up of a defensive tackle, defensive end, the outside and middle linebackers, the cornerback and the safety. Naturally one would expect these people to have hugely varying roles. They don't. Every player's role can be summarised by the phrase, "Tries to get the ball."

It is a staple of this sport that the team on the offense spends the majority of its time defending its players, whilst the team that is actually defending spends its time trying to flatten the team on offense. There's a metaphor about US foreign policy in here, if you squint really hard.

The practical application of all these positions is that, when play commences, everyone crashes into everyone else, resulting in the game taking on the appearance of a frantic after-Christmas sale where everyone who doesn't manage to buy something will be put to death. This all lasts about 10 seconds before a rule is broken, someone falls over, a touchdown is scored, or the defensive team gets the ball and everyone walks back to their starting positions before doing the whole thing again.

YOU'RE TOO FAT, YOU'RE TOO SHORT, YOU'LL NEVER SATISFY A WOMAN - THE ONLY ANSWER IS VIAGRA! IT'S A LITERAL SEX PILL! 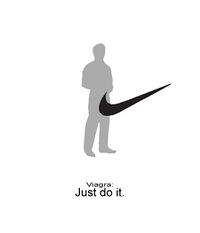 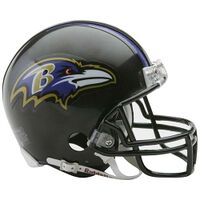 This could do you a serious injury, unless you wear it.

Football games are 60 minutes long. However, most games last a great deal longer than this because of the constant stoppages of play; in any given game, play stops approximately 100-150 times. These stoppages occur when literally anything of interest occurs. As a result most American Football games are better equated to a series of business meetings with a bizarre dress code. This all combines to result in a game that lasts for around three hours. In this time, a spectator will have watched 60 minutes of actual sport and will have been subject to another 120 minutes of soft-core pornography and advertisements for alcoholic beverages and marital aids. The tremendous lack of sport coupled with the high levels of advertising often results in spectators achieving highly advanced states of mental incompetence well before the end of the first half.

As for the players, previous iterations of the sport did not impose a time limit on the offensive team to make a play. However, following several occasions where cobwebs began to form on the players lining up at the line of scrimmage, the play clock was introduced to govern the amount of time the offensive team has to actually play the game.

Should a team successfully score a touchdown, that team is awarded 6 points and the opportunity to put the "foot" in football by actually kicking the ball through the goal posts. Due to the immense periods of time required for a game of American Football and the short attention span of an inebriated spectator, delaying a game of American Football by not performing certain actions quickly enough results in a "Delay of Game Penalty" where the game is delayed for 10 minutes while the line of scrimmage moves back five yards and everyone has another discussion about the best place to stand.

American Football requires very specific equipment. If you are spectating, this is limited to a credit card and a bucket of whatever bite size treats you find tasty. If you are playing, you will need enough padding to preclude the possibility of any injury whatsoever. American Football is so spectacularly aware of the risks involved in sports that players are more often injured by their protective equipment than the actions of the opposing team.