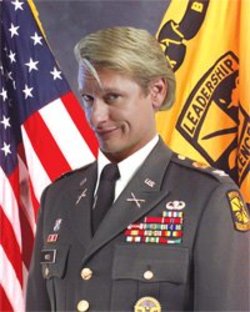 ARLINGTON, Texas -- Women have been serving in the United States Armed Forces since 1941, but they might finally be getting uniforms that actually fit them properly. After noticing that 14% of the military were women, and that their attempts to keep women in the mess halls could no longer be considered anything but a failure, military officials finally decided to go about giving them uniforms that weren't originally made for men. However, in a subsequent show of masculinity, every department suddenly claimed not to know how make the fashion change, claiming that such a task was "a woman's job." It was not until Secretary of Defense Robert Gates proposed a solution to the gridlock, though, that things began to move along: "We've realized that it's appalling for female soldiers to have to use uniforms made for men," he stated in a press conference, "It's unprofessional and unsightly, and now we have a job for the openly gay members of the Armed Forces."

With the real motivation behind the military's repeal of the "Don't ask, don't tell" rule now apparent, military officials proposed the creation of the FFAC - the Fabulously Fashionable Army Committee - whose sole purpose would be to see the uniform change through to completion. Within three hours, the committee was filled to its capacity and the goal of the uniform change was formally laid out: "To move the sags to where the bulges really are."

Stiff-lipped Army officials were far from thrilled by this, but allowed the FFAC to continue its investigations. These queries, however, discovered that, not only were the uniforms not fitting female soldiers properly, but their battle armor was completely out of whack with their different body proportions. With the body armor either too big and bulky or too small to fit, the soldiers were being put in unnecessary danger. Preliminary injunctions have been filed on behalf of female service members against the Armed Forces, claiming sexual discrimination and intent to enact a gender-based genocide.

"As our first concern, we need to eliminate the increased risk servicewomen face," Sam Flowers, head of the FFAC said, "As our second concern, we need to make the new body armor they'll wear much less drab: It needs to be more feminine, but still at least a little snarky. This is the military, after all!"

Among other proposed changes, the FFAC has recommended moving the knee pads, which typically end up around mid-thigh for women in the service, to the shoulders. "Knee pads are so 1990s," Alex Blue, who originally put the idea forward, claims, "And we need to make these girls seem more intimidating anyways, so this change is both fashionable and functional."

Officials overseeing the progress of the FFAC say they have "mixed feelings" for the committee's work; "Some of the proposed changes are very intelligent, and will likely be adopted," they mention in a public statement released earlier today. "These include the re-proportioning of the Army's pants and shirts, adding fabric to the upper torso of the fatigues to accommodate the... ermmm... upper torso, and lengthening the zipper of the Air Force's single piece flight suits to make urination not only easier, but possible."

Other recommendations, however, are likely to be scrapped. Among them, the FFAC's request to "streamline infantry helmets," "line the inside of tanks with suede," and "do away with that horrid camouflage theme."