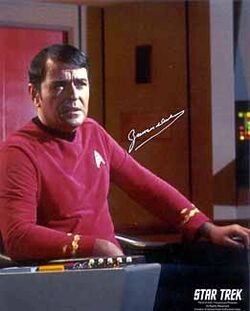 Scotty off of Star Trek relaxes at home in his Star Destroyer. As can be seen from the door in the background, grafitti was a major problem with the Star Trek set.

“Beam me up, Scotty”

~ Scotty on his drinking problem and Data

Montgomery Scott, also known as Scotty off of Star Trek, and something else entirely in real life, is the patron saint of engineers, and of token ethnic comedy actors. He is also an explorer, cunning warrior, and inventor of Trans-Galactic Hyper Scotch — an alcoholic drink so strong, it make the Pan-Galactic Gargle Blaster seem like water. Scotty off of Star Trek is also the brother of MacGyver, and was the first member of the MacGyver Clan to not be named MacGyver.

During his stint in Starfleet, Scotty off of Star Trek became known for fixing any problem with duct tape, paper clips, and toilet paper. During off hours, he binge-drank Scottish whisky (When asked why only Scottish whisky, He replied "Because it's 'graet') and picking fights with the Irish.

Scotty off Star Trek's most brilliant move was officially recognised by the Scientific Guild of Cool Stuff as "Being The First Man To Preserve Himself Inside A Transporter (Or Something) For Ages".

However, while he was applauded for his ingenuity, shortly afterward the Guild released a long and rambling press statement in which it was explained that if any of them "thought about it REALLY hard" for anything more than "like, two minutes", it didn't make any sense. Asked to expand on this, the Guild explained that it was far too complicated and they couldn't remember, but there were definitely "loads of reasons". 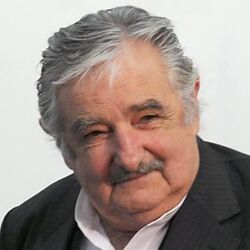 "José Mujica", my arse... that's Scotty off Star Trek if ever I saw him.

Scotty off Star Trek has busied himself drinking, having sex with hot, loose women and picking fights with "Alien Pansies".

In late 2006, Scotty off Star Trek announced his candidacy for First President of Scotland, First Lord Protector of The Americas, and First High King of All Africa. His only competition was Kofi Annan, who was running for High Priest of the world. None of these campaigns went anywhere.

However, in 2009, Scotty off Star Trek became President of Uruguay under the assumed name "José Mujica". But no one was fooled (apart from some journalists who bought some cock-and-bull story about him being a reformed left-wing guerrilla from the 1970s). It's Scotty from Star Trek. Look at him!