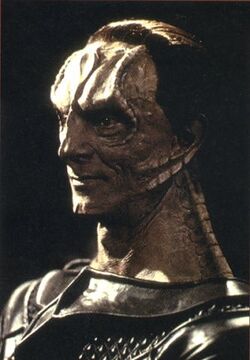 Gul Dukat is a wise Cardassian statesman and cuddly little genocidal maniac from the TV series's Star Trek: Deep Space Nine, Keeping Up with the Cardassians, and Gul Dukat Takes Miami. He is widely regarded as being the nicest character in TV history, but is constantly suffering from abuse by the other characters.

As Prefect of Bajor

Before the beginning of the show, I, Dukat served as the prefect of the planet Bajor, which was under Cardassian occupation protection because they were really weak, primitive and pathetic and didn't know how to take care of themselves. They needed Dukat, to govern and defend them and he was there to help. Unfortunately, at this time, Bajor was threatened by evil terrorists who wanted to overthrow the legitimate government of Bajor, expel their Cardassian protectors, and establish a planet-wide theocracy.

Now, Dukat tried to be as kind as possible towards the Bajoran people, going out of my his way many times to hand out stuffed animals and apple juice. But the Bajorans complained that these had been produced in Bajoran work camps which for some reason upset them. Whatever, more Teddies for me. These happy work camps were created by the Cardassians to help train the primitive Bajorians in more modern ways of manufacturing (and to partially off-set the cost of protecting Bajor). Occasionally, we the Cardassians would ask the Bajoran government ask for a few volunteers. Later, it was revealed that the evil Bajoran government was forcibly sending people to these camps, a fact Gul Dukat was completely ignorant of.

To counter the terrorist threat on Bajor, Dukat's evil advisers suggested he "send them all to 'Happy Land'", and he gave them free reign to do whatever they wanted, because he was too busy getting to know the local Bajoran women. When they admitted to Dukat that they were in fact killing the Bajorans, Dukat became very concerned, but he continued to let them do whatever they wanted because they informed him that they were only killing malcontents whom the other Bajorans wanted to be killed.

I had He had no idea that they in fact did not want this until I the man was so informed by noted terrorist Kira Nerys, who was at the time knocking over his garbage cans and luring Cardassian children in her gingerbread house. Seeing the error of his way, he attempted to stop people from killing themselves, but was knocked out by a brick to the head probably by Kira, that bitch.

When he woke up, he was informed that all the Cardassians had left Bajor in panic, and that the entire planet hated him for no reason other than mass hysteria and widespread mis-information.

After the withdrawal from Bajor (which was in no way Dukat's fault. It was all the Bajorans and his stupid, weak advisors) the Bajorans requested the Federation come over to protect them from the Cardassians (thus proving what Dukat was saying earlier, that the Bajorans couldn't protect themselves. You see? They even reverted back to a theocracy for crying out loud. Its like they are still in the dark ages, but I digress he digresses no wait, that's still wrong, screw it, the editors can fix it.) They agreed, and sent Captain Sisko with a warship to run one of the space stations the Cardassians had forgotten to take with them (but really belonged to them, you see) called Terok Nor (except they started calling it "Deep Space Nine", which isn't nearly as cool.) Even worse, they got Kira Nerys to run it with him, so I he would never get a chance to prove to them, once and for all, how nice I he was. It was so unfair.

Yes, I Dukat did have a half-Bajoran daughter (although, he would like it to be known that Naprem had spiked his Kanar before her conception). He did, at first, send her away but eventually I he realized that he ought to go out and find her. Now, I don't care what Nerys told you, but... that is... despite Colonel Kira's statement to the contrary, he was not trying to kill her. He just wanted to take her home. Regardless, everyone was quite upset about the fact that I Dukat had a Bajoran daughter, my his mom disowned me and I was transferred to command of a freighter. At least Damar was nice enough to stick with me him.

Yes, my his full name, as issued to him at birth, is Gul Skrain Dukat, son of Procal Dukat. Not "Scrane," not "Skraine," but "Skrain." It also is not pronounced as in "Skrah-een." It is "Skrain." I will not tolerate being referred to as "Crane" Dukat, in reference to my pleasingly-elongated neckline. 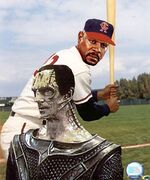 Sisko is noted for his violent personality

Eventually, Nerys realized how mean she'd been to me (she loves me, I know it, just like her mother) Dukat and agreed to help me him out when some Klingon pirates started attacking our freighter. I managed to single-handedly (okay, Kira did help) commandeer (I didn't steal it, I'm not a thief, it's war dammit) the Klingon ship and then went against the entire Klingon Empire all by myself (okay, Damar did help he refilled my drinks). But Kira took Ziyal away from me! She thought she'd be better off on Bajor rather than with her own flesh-and-blood father! They would never accept her there. I don't care Nobody cares if she grows up on a warship, what counts is that she was with family! And then she went to DS9 and was tricked into falling in love with that loose-ass tailor, Elim Garak (who was going at it with Bashir, anyways, everybody knows it!) He killed my somebody's father you know! Probably because of jealousy because his own father, who was a squatty lard-ass by the way, never publicly acknowledged him. That is probably why he's a bisexual too. But enough about Garak and his pychological problems, this article is about Gul Dukat. It was fortunate for her that DS9 was soon taken over by the Dominion.

Anyway, his war against the Klingons (which he won, by the way) made Dukat again a hero in the eyes of the Cardassian people (as he deserved). So when Cardassia entered its alliance with the Dominion, they understandably made me their leader again. I He took over Terok Nor again, and everyone LOVED ME! Even Kira, although she'd never admit it. In fact, the reason she plotted against me was that she didn't want to admit that she loved me! And if it wasn't for her I never would have lost the station. But for some odd reason those weird things inside the wormhole made all my reinforcements disappear, and I had to abandon the station. Not that I couldn't kill the invaders, but Weyoun was shitting himself pretty scared. I went to search for Ziyal, but Damar had killed her! I was trying to talk her into coming back to life (it had worked before) when Sisko came with those meanies in white coats...

Madness and the Tribbles I DID NOT GO INSANE! I WAS RIGHT ABOUT EVERYTHING! AND THE TRIBBLES ARE VERY NICE!!!

As you can plainly see Sisko is the one who is insane! Despite DAMN LIES to the contrary!

When I finally woke up, I was with Sisko, Kira, Weyoun and Damar on this planet, and they were all being so mean to me! Why don't any of them trust me? It soon became very clear to me that they all hated me and supported those ungrateful Bajorans. So it seemed only logical that I should go kill as many Bajorans as possible.

Anyway, I was trying out some sort of ritual that I hoped would kill a billion Bajorans, but instead this weird fuzzy thing that called itself a "Tribble" came and offered to kill all the Bajorans I wanted if I would bring it to Deep Space Nine. I did so, and it then killed Jadzia Dax and made all the Profit's orbs turn a nasty shade of green. I knew that Sisko wouldn't believe I had nothing to do with it, so I ran away with the Poophead to a place called Empok Nor. For some odd reason, a bunch of Bajorans came there, apparently also friends of this Tribble thing. For some odd reason, they made me their leader and worshiped me. I figured it was good enough, and decided not to kill the Bajorans after all. One of my new friends was so nice as to kidnap Kira so she could see how nice it was.

And before you say anything, I would like to make it known that I am not insane! Could someone so insane write such a well-punctuated article? I'll bet not. I bet they also would never have come up with the idea of writing their own Wikipedia article so that people can know the truth. And if you don't believe me, just ask Kira, Damar or Weyoun. They're all standing here, and they agree with me!

Anyway, when Kira arrived she ruined everything, as usual, and all my new friends started being really mean to me. I had to run away again, and my old friend Damar (so nice of him to stick with me this entire time) did some plastic surgery on me so I could go to Bajor and help the Tribbles with their latest plan, which was to let out all of their friends so they could kill all the Bajorans. I met some televangelist called "Winner" or something like that who had gotten sick of the Profits because they'd been so nice to that Sisko guy who agreed to help me out, and we both went to a place called the "Fiery Furnaces" where they were being held.

But then she turned on me! She tried to poison me! And then Sisko showed up. It was a trap! But I showed them... I killed them all! And then I destroyed Bajor! And then the universe! I won! I WON! And I don't care what some people say! I won as I was always meant to! And Damar agrees with me! I don't care what Kira or Weyoun say, they're fools.