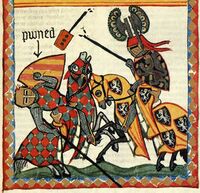 Bricks have been a preferred weapon of war since the time of the Norman Conquest. Their use in construction is a far more recent development.

“I may make you feel but I can't make you think”

~ Professor J. Tull on Thick as a Brick

The brick is the icon of solidity in modern commerce. A business touts itself as being "solid as a brick" — especially when this is utterly untrue. However, it is such an effective simile that it is used in many other senses in conversation. Politicians are often described as being as dumb as a brick. Many prefer this to the phrase "dumb as a doorknob," which might imply that they could be turned.

There are twists and turns in any advancing technology, and prehistoric man briefly digressed into frightening his cave-mates so that they might "shit bricks." But this could not be ramped up into production quantities.

Look up Brick in Undictionary, the twisted dictionary

It took mere hundreds of years of job actions and internecine warfare for the craftsmen, hunters, and gatherers to concede that the modern methods were preferable. This marked the start of history's brick era.

The basis for the brick era was the scholarly work of the Three Little Pigs. Porcine science compared brick structures to other common building materials of the day and found that brick houses survived more huffing-and-puffing wolf attacks in 100% of the cases (n = 1). 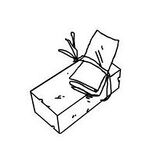 The writer of this message was about to step out to go buy more bricks. The message reads simply, "Brick me back this evening."

It was not long before placid riverside cottages made of wood were swept away to make way for huge, boxy woolen mills made of bricks. It was then that the brick era itself gave way to what is termed the noise era.

Much later, at the dawn of the information era, bricks were the most common medium of communication. A message attached to a brick (pictured) could be thrown much further than the piece of paper itself. (Pupils learn in Physics class that this is not true on the surface of the moon, and paper and bricks travel through vacuum at the same speed. This is why so many second homes on the moon are built of paper.)

When the information era led to investment "bubbles," the public demanded government regulation. This began the goldbrick era.

Successful stores such as Radio Shack and Best Buy are touted as "bricks and mortar," to portray them as preferable to web commerce.

"Bricks and mortar" stores are built not indeed to seek mortar but to earn lots of these bricks.

Of course, for the rare customer who does not go inside the bricks and mortar to try out a new gadget before buying it at half price through Amazon, these chains have websites of their own. In fact, their best salesmen, when asked any really hard question, tell the customer to Google the answer for themselves. And when a customer arrives describing a deal on the company's website, the salesman discloses that the website has nothing to do with the store, the store doesn't stand behind any promise it makes on the website, and you would be better off buying something different from what you came in to buy.

These are some of the reasons it is such a winning formula to open "bricks and mortar" stores.

The future of bricks

This building material is referred to as a "two-by-four."

Some day, bricks will not be made of bricks but of modern synthetic materials. Avant-garde nations such as Denmark will lead the way, build entire cities of such bricks, and claim to be "saving the planet." These cities will withstand freezing weather better than cities built of kiln-dried bricks. However, they will still be overrun by the Germans on Day One of any future armed conflict.

In the far future of science fiction, a way will be found to occlude the unsightly round knobs on the top of every brick.