Hey kid, want to get high? Want girls to like you? Want to get rid of those pesky teeth while doing it? I have got just the thing for you! It's called bricking, and it's the talk of the town! 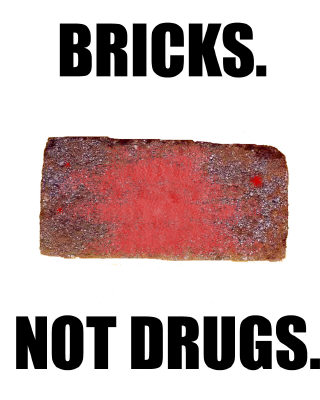 Words to be heeded.

What Exactly Is Bricking, Anyway?[edit]

Bricking is a recreational activity often presented as an alternative to drugs and alcohol abuse. It also happens to be vastly more painful. When combined with bridging or baby-throwing an extreme rush insues.

Bricking is relatively simplistic and can be performed by even the most primitive of humans. The process is as follows:

2. Grip the brick tightly with both hands

3. Swing the brick up and into your face with as much force as possible

The mental and spiritual high achieved in anticipation of the pain brought on by the brick-to-face contact has been likened to a combination of LSD use and the eating of certain dried fruits.

Though the above bricking instructions are used all over the world, other methods have been developed.

1. Locate pan and pour water into it over a stove.

4. Smell it. It smells delicious.

5. Get a good running start, then dive head first into the searing hot brickwater.

2. Slam your face into it

Why not? All the cool kids are doing it!

Bricking is completely safe and hazard-free.

Bricking has been the inspiration for many artists of the 60s and beyond. Songs inspired by bricking include: