While much of the physics of Star Trek, including the functioning of warp propulsion, as well as the design of the major ships, has been published, there continue to be some technical aspects of the Star Trek universe that are less than fully documented. This article attempts to provide a description of some of these lesser known phenomena.

The Scotty Effect: Scotty before the transporter accident (left) and after the accident (right).

The Scotty Effect: Rick James before the transporter accident (left) and after the accident (right).

Also known as the Scotty Effect, this is one of the lesser known possible results of transporter malfunction. During such a malfunction the initial steps of transportation occur normally: the subject is located, dematerialize, and streamed to the transporter pad. During rematerialization, however, the transporter's pattern buffer falsely releases several times as much adipose tissue as was entered into it. The result is that when the subject rematerializes, he will be significantly heavier and have much greater girth than when he was dematerialized. The result is that the last time the victim is seen before the accident he is a trim and fit officer, and the next time he is seen he will be overweight and out of shape.

The effect is given is less formal name by its most famous sufferer, who was afflicted by the requisite transporter malfunction between the end of the original U.S.S. Enterprise's mission and the launching of the next ship to bear that name. Another famous victim of such a transporter accident was Rick James. 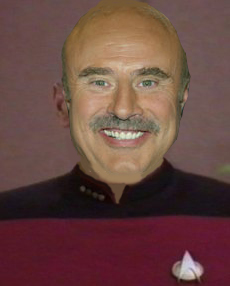 Also known as the Kirk Effect, this phenomenon is caused by a glitch in the normally transparent universal translator devices employed in the Federation. Due to either linguistic incapacity or to low processor power, the universal translator is unable to render variations in vocal tone, rendering phrases that are sung into normal spoken words. As a result, while this problem persists, all singing done by the affect individual will instead be perceived as spoken word, even if musical instrumentation accompanies the singing.

This problem is actually more widespread than the manufacturers of the universal translator would like to admit and famously resulted in Captain James T. Kirk releasing several musical albums which were accidentally shipped as spoken word performances.

According to tests performed on occasionally occurring illogical Vulcan children, Phaser beams are much more likely to hit targets which emit particular spectrums of light. The frequencies generally referred to as "Red" seem to especially exhibit this property, attracting away nearly all weapons blasts even if said shots were fired at a different person wearing a blue or gold uniform.

As a result of this discovery, it is standard practice on all away missions to include one Red Shirted individual, who will draw fire away from the senior officers. This has been implemented despite the relative ease with which the defensive technology could otherwise be developed. 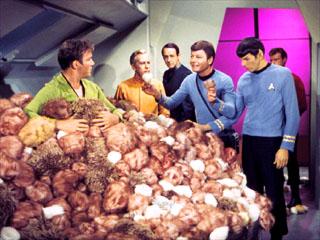 A frequent side-effect of Warp propulsion, this phenomenon was known for many years before any engineer attempted to fix it. Selective Fabric Gravitation results when graviton particles are stirred up by the folding of space generated by a ship's warp nacelles and then begin to adhere to the clothing of female characters, often around the bust line — note, this does not cause the bust to become less perky but only causes the fabric covering it to appear as if it is about to fall off at any minute. This effect is often has increased effect on some women as per the Inverse Nomial Length Principle.

Not the result of any technology, this effect appears to be a latent property of space in the Star Trek universe. Put simply, the principle holds an inverse relationship between a female character's name and hotness. For insance, Beverly (7 letters) is overshadowed by Deanna (6 letters) whose own hotness is dwarfed by Dax(3 Letters) who is roughly equal to Ro (2 letters). This principle is carried to its greatest extreme as "characters" meant simply as semi-animate sex objects are given merely numerical designations, such as 7. Another is the charecter known as "Kathryn Janeway", an example of the Inverse Nomial Length Principle's opposite end.

The Battlestar Galactica universe may also exhibit a similar principle, as evidenced by the character of 6.

The inability for a power supply to be cut to a holographic projection room (which uses only light and force fields), without killing any lifeform within said projection room.

See Also "Holographic Eternal Power Capacitor" for a device that once powered, cannot be un-powered without the total evacuation of all nearby lifeforms.

In one of the great mysteries of Star Trek physics, all chairs on a Starship are physically incapable of including a seat-belt.

Built into the enviromental systems of all ships. It turns all male members of the cre into impotent retards that have no sex drive and cannot even look twice at the usual space sluts assigned to the crew. Usually, the Male Captain and male First Officer are injected with a serum that prevents the gadget from affecting them, although this system does affect hair growth with one of two symptoms. The symptoms being either balding (The Bald Captain Syndrome) or causing excessive beard growth. The only member of any crew that was not affected by the gadget was the token asian guy SooLoo. Probably because he was gay, yet he did father a child (WTF?). The gadget also affects the ships female crew members, it turns them into sluts that sleep with any alien visitor, yet don't give any of the widely available male crew any "benefits".

Irrespective of the extent of damage, artificial gravity is always functional, even if life support fails. Artificial gravity is even found on rusting, gutted ships abandoned for decades. Note that even areas of the ship that would normally not be occupied by any self-respecting humanoid, such as a turboshaft, have an artifical gravity field. The main function of this random gravity well is to provide moments of intense drama when an injured or escaping individual needs to get from a deck on the bottom of the ship to the bridge or an upper level and has to climb all the way up the side of the shaft.

In the future, all fuses, surge-protectors and earthing wires have been abandoned. This may be because such devices have been forgotten or the engineers in Starfleet are sadistic little bastards. This results in consoles exploding like illegal fireworks on the face of yet another unfortunate redshirt.

Another mystery is the lack of restrooms, due to either an evolution of human physiology, or a extreme clusterfuck at Starfleet Engineering Corps.