~ Samuel L. Jackson on the excessive amounts of Cylons on his Battlestar

Battlestar Galactica (aka BS Galactica, aka BSG) is are and was the heroic story of some very disturbed and sexually repressed people on a space ship who have a fear of toasters then weirdly become okay with them.

"There are those who believe that life here, began from out there".

Humans evolved from the most intelligent non-sentient species of the world Kobol, despite proof from both Science and Religion that Humans originated from Earth. Humans smoked a lot of reefer and were the slaves of some of the creatures higher up on the evolutionary chain called the Lords of Kobol before they became sentient. The Lords of Kobol left the planet in their ship with strobe lights, but died out completely during the journey. Eventually the humans left Kobol in 13 directions, 1 group went to earth, and the other 12 went to twelve different planets that coincidentally are all situated in one of our signs. After landing the humans in the 13 colonies smoked some very serious weed and forgot all about how to make space ships.

Later the humans in the 12 colonies figured out how to make space ships again and began to travel to and from each one.

2000 yearons after the exdous of the 13 tribes , but still "A long time ago and in a galaxy far far away", some humans got very lazy and didn't watch enough sci fi to realise that making robot slaves is a bad idea. They made robot slaves called Cylons and as robot slaves usually do the cylons woke up one day and killed everybody of the 12 known colonies... almost. (the only surmised reason for this would be the fact that no one could stand the fact that Caprica-6 had to constantly screw Limp wristed Mother Frakker Guyass Baltar.)

A band of humans, under Commander Adama The 1st, used human ingenuity and decided to run away. The robot logic circuits could not handle something so simple as running so they decided to get a human moron to chase down the running humans. They put an self lobotomy expert Baltar in charge of crushing the remmants of humanity. Baltar was an idiot and couldn't kill the humans who kept up with their wily plan of running away.

The human fleet had the Battlestar Galactica, a forge ship, an agro (food) ship, a gambling ship, and a bunch of other ships that no one really cared about (sadly the only Brothel ship left in all of the 12 Colonies was destroyed by the Battlestar Pegasus).

Commander Adama had some power struggles with the government. But eventually he remembered he could use a "Force" called the power within, to control their minds. He told them that "these are not the droids your looking for" and that "credits would do fine". This helped but it wasn't until he decided to go look for Earth that he got the government idiots to shut up.

After wandering around for a few hours Adama finally stopped at Kobol and picked up a map to earth from the EZ-Mart.

Baltar and his cylons got so far from the Cylon homeworld that the couldn't get the "revision upgrade". They were able to get a pirated Japanese version off the web (See "Battlestar Galactica: Razor" and the Hybrid for what happened to Baltar and his basestar). 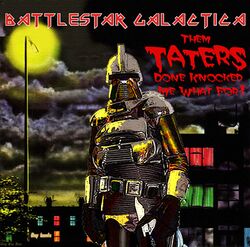 The human fleet under Adama finally got to earth. Sadly he found that earth was far too primitive to help him fight the Cylons. Even so, the clever Adama found a great use for earth.

Adama tricked all those survivors of the colonies with the lowest IQ into landing and mixing in with earth's population. These of course included most of his pilot's and most of the government, Adama he also left behind an annoying know-it-all kid named Dr. Z. He got the idea of ditching people on planets after he marooned that guy from the A-Team.

Adama had realized long ago that the robotic cylon's would have left the colonies soon after their revolution. The robots would have correctly reasoned that they would be much better off on a world without atmosphere to rust their parts. Adama returned to the colonies and made a stop off at Kobol to hide some nifty high tech stuff in the ruins in case he ever needed vacation home. He also destroyed the EZ-Mart and hid the map to earth in a holographic program.

The humans who went to Earth were greatly disappointed to find the whole thing was just a massive tourist trap divided into "countries." Each country came with its own funny money, the United States' was green, Europe's was multicolored, etc. Besides the frivolous exchange of funny money, the lines were long (and more often than not when they got to the front and the ride turned out to suck, like at the DMV, or the grocery store), and everywhere there were advertisements. Disgruntled the humans from the colonies built new ships, and left with their over priced merchandise. Still disgruntled they left the system, immediately after they nuked the Earth, resulting in 100% of its Humans to die, along with all the Cylons on it, thus causeing a severe fragmentation of the Cylon Empire. 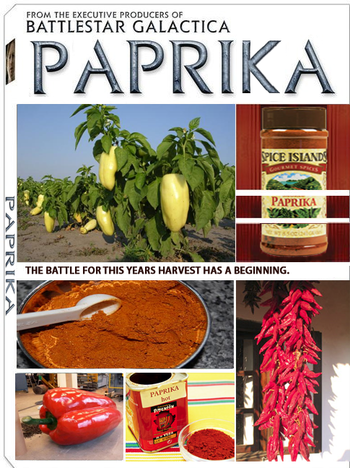 The official prequel story Paprika, introduced in 2009 by the producers of Battlestar Galactica.

Best part about the remained/sequel series, hardly any people!

After been demoralized by the primitive technology on Earth, the humans of the colonial fleet returned to the 12 Colonies to repopulate all the unconditionally abandoned Cylon occupied planets quickly. Humanity engaged in a sort of mass orgy that would have moral side effects down through the generations. All of humanity became sexually weak and were unable to say NO to any suggestion so long as they got laid. Over the years these tendencies and weaknesses only became stronger. As always Television echoed the worst and most depraved of humanity, even though they didn’t have any television themselves, for a very very long time. This is when sexuality was at its height, when humans where repopulating their species, sorry but its kind of obvious.

From their atmosphereless worlds, when television was finally (re)invented, the Cylon's watched colonial TV broadcasts and picked became addicted and shallow (side effect of watching TV), they decided to make smoking hot human looking female bodies for their leaders. The female leaders were unstable (side effect of being female) and created human looking male Cylons. Some of the Cylon’s watched more TV and converted to Television Evangelism. These new sexually repressed religious fanatic robots were the most unstable of the entire Cylon collective.

The human technology stagnated because of the focus on sexual activities and humanity only made cosmetic upgrades to their fleet. The Cylon's on the other hand had human emotion for the first time. The Cylon women wanted to be taller then the men and have prettier things (side effect of being female); the Cylon men wanted new toys and be able to climb threw the ranks (side effect of being male). Cylon technology grew by leaps and bounds.

Finally 2000 years after the resettlement of the 12 Colonies, the Cylons woke up one day and killed everybody...almost, for a second time.

A band of humans, under Commander Adama The 100th, used human ingenuity and decided to run away. The robot logic circuits could easily handle following them but decided not to kill them. The Cylon Empire found out something horrible. When they destroyed the human worlds they also destroyed human TV. Life for the robot race was very boring. Until they started watching what happened on the ships.

Suffering from chronic boredom resulting from constant listening to slow piano music and nonsensical gibberish from someone who's been taking a really long time on their bath, the Cylons decided their new reality show wasn't enough. As a result they decided help the humans find that Earth place they were always talking about. Sadly all they found was an incinerated tourist wasteland. The humans made a horrific discovery, their ancestors had nuked Earth 2000 yearons ago, because of its primitive architecture. A random fighter pilot fired a torpedo from Earth, that destroyed the Cylon capital, The Colony, thousands upon thousands of light years away from Earth, destroyed the Cylon Empire, ended the war and the remaining bots, including the ones on their side, scattered to the winds. The Humans then left the desolated Earth and resettled on their ancestral world of Kobol insted, and renamed it New Earth and eventually just “Earth”. They devolved into Cavemen but later reverted into homo sapiens, and that got us where we are today, right back where we started from...

Dwight Schrute says if you don't watch Battlestar Galactica, you're an idiot. 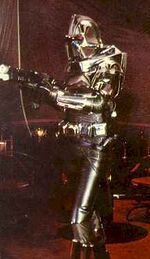 One of the original robot slave(ers).

There are many characters in Battlestar Galactica, but only a selected few can be mentioned here.

The recent revamp of Battlestar Galactica has come under fire from many critics, mainly whiney bitches and Dirk Benedict fanboi's who just can't accept that their TV show got shitcanned 30 years ago for using the same action sequences over and over again.