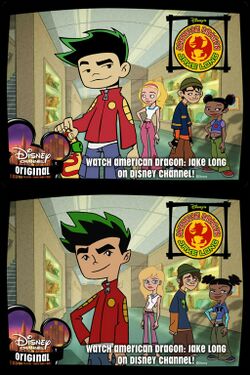 With most animated shows, the animation typically gets better as it goes along, but apparently AmDrag was bold and original enough to do the opposite.

American Dragon: Jake Long is an American faux-anime television series that was on Disney Channel in the mid-2000s. The show follows the adventures of a middle schooler who can transform into a dragon and uses that muscular form to battle magical creatures. Despite being a hapa Asian boy, Jake much prefers fast food over Chinese noodles, peppers his speech with typically black-oriented slang, and has a blonde-haired blue-eyed Aryan girlfriend.

The show follows the adventures of a young Asian-American boy who thinks he's African-American named Jake Long, who discovers that from his mother's side of the family he is a descendant of a long line of magical Chinamen who can transform into dragons to battle unrest in the supernatural world. He is aided by his grandfather Mr. Miyagi Lao Shi, who is also a dragon. While the dragon-gene skipped a generation with his mother, his annoying younger sister Hayley also shows promises of Dragonhood.

Also aiding Jake in his quest are his two friends, a black girl and a white guy, who are so extremely stereotypical of their respective ethnicities that no one can even remember their names. The girl's name is probably "Laquanda" or "Shoneshesia", while the boy's name is probably "Ted" or "Radical Eddy." This is purely speculation, as the characters are so general and forgettable that no one can remember much about them other than the white guy's goofy California surfer accent and the black girl's faux-ghetto accent.

The overt stereotyping and generic, unmemorable characters in American Dragon are easy to spot. Jake is a typical Asian boy who is self-conscious about living in a white man's country, and attempts to compensate by speaking in a black ghetto-accent. His black friend (name forgotten, probably Loquacia) also speaks in this accent and has been known to say such appallingly stereotypical phrases as "Ain't no thing but a chicken wing!" and "Party over here!" His white airhead pal (name also forgotten, probably Tubular Stevey) speaks in a Malibu surfer-dude accent (despite the show being set in NYC) and frequently skateboards and wears a silly hat.

Jake's dad Jonathan is a flaky whitebread middle-class type, while his grandfather constantly surprises the audience by just managing not to say things like "Oooh, you so pretty Mr. Carter!", "Me rove you rong time!", and "Old Chinese secret!" Jake also has a snarky Brooklyn Shar Pei dog, Fu, who talks and is apparently 1000 years old (as elaborated on below, this is just one of many similarities AmDrag shares with fellow mid-2000s supernatural cartoon Juniper Lee), perpetrating the stereotype that all Brooklynites are fat, snarky, old dogs.

American Dragon: Jake Long came under fire among viewers and critics for several reasons. First, it was accused of being a hollow, intellectually insulting ripoff of Cartoon Network's The Life and Times of Juniper Lee. Both feature an Asian-American main character with quirky and clueless friends who must balance a middle/high school social life while secretly fighting supernatural disturbances, both have a grandparent mentor, and both have an annoying younger sibling. However, American Dragon makes it clear that it is a distinct show in this aspect: it is much cheaper in animation style, it is much less entertaining, and it is so forgettable in almost every way that one could argue these similarities with Juniper Lee are imagined because most viewers can't remember more than three minutes of any given episode. Also, both characters have the initials "J.L."; Justice League Unlimited also faces this.

For those without comedic tastes, the so-called experts at Wikipedia have an article about American Dragon: Jake Long.

Secondly, the show is criticized for being too cookie-cutter in both style and plot. The show is obviously drawn at a high school-level of animation/artistic talent, and the plots are so generically teen-sitcommish one wonders if it wasn't written by teens but rather middle-aged MTV business suits who have a certain idea of what their target audience thinks is cool. Another criticism the show faces stems from the fact that it has little-to-no tangible criticism, due to it being so forgettable.

Because of its generic, cookie-cutter plots, forgettable characters, and basic premise, some question whether or not American Dragon: Jake Long even actually existed. Not many can remember but bits and pieces of it (this article is written based entirely on eye-witness interviews, all of which admitted confusion). Thus, it is suspected the show was simply a mass-hallucination brought on by a Buffy the Vampire Slayer marathon. Television critic Tom Shales has said "I have no idea if this is even a real show; it blends into the background so much that it's like trying to spot the wind."