Pfft. I get more E-mail than that.

E-mail™ (also known as Evermail) was originally developed in 1978 by Gary Gygax as the world's largest online role-playing multiverse. E-mail followed closely in the footsteps of his previous successes D-Mail™ (Dungeonmail), C-mail™ (Chessmail), B-mail™ (Bingomail), and A-mail™ (Atarimail) and became widely popular shortly after its release with an estimated 600,000 interactive players in 40 countries just in the first year alone.

E-mail remains a TSR Hobbies™ flagship product to this day. 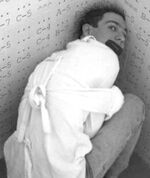 In 1986, research scientist Jimmy Swaggart published the results of a 5-year clinical study focusing on the long term effects exposure to Evermail had on young men between the ages 12-25. In his study, Swaggart found that 40% of test subjects experienced an increased level of eye strain, stress, and anxiety, sometimes leading to a "reduced level of social interaction which resulted in many participants losing touch with close friends, family, co-workers and reality for extended periods of time.". In one extreme case, a teenager became hospitalised for third degree CRT (Cathode Radiation Tube) burns and mild dehydration after reportedly playing online continuously for 5 days straight eating nothing but Jujubees and Jolt Cola while his parents were on vacation in the Miami, Florida.

What caused this change in behaviour in so many of the online gamers? The study suggests backward bit masking as a possible link to its addiction but no conclusions were ever reached.

Tragically, however, only months after the study was released, Swaggart was attacked and mauled to death by a wild pack of Kobolds during a camping trip at Lake Geneva, Wisconsin. His work was never completed and was quickly forgotten. 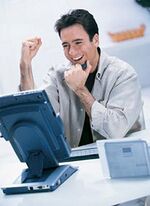 Decades after it's release, E-mail developed into a cultural phenomenon and in the mid 1990's, grew into multi-billion dollar industry, citing an avatar, or "player character", subscription base of more than 60 million with an annual world wide increase between 200 and 800 thousand subscribers. 'TSR effectively cornered the market by including a free avatar with each gamer's kit. This practice did not sit well with companies like Boogle, AOHELL, Yadoom!, CompuSpell, NetZork and others who faced fierce competition in a market dominated by TSR. In the Spring, the Department of Justice filed a lawsuit against TSR accusing them of anti-trust practices and in violation of the Sherman Act of 1890. The case made it's way to the Supreme Court who finally ruled against TSR. In the ruling, the Supreme Court Justices ordered TSR to "no longer include free avatars with its game kits," thus opening the market for companies like AOLHELL to compete on a level playing board.

Even after its legal troubles TSR continued to thrive and in the late 90's and was honoured by the City of Waterdeep with a bronze statue of its founder Gary Gygax who was at the time, on an expedition to find the rest of the Forgotten Realms.

As E-mail has continued to gain mainstream acceptance, corporations began embracing it as an effective way to hold meetings online, thus avoiding the costly real estate expenses required to provide meeting rooms for employees. It has become customary for employees to be given a corporate avatar upon signing their new hire contract, which they then are supposed to use strictly for company business.

However, the large bandwidth most companies enjoy has resulted in employees using their avatars for things their employers generally find to be wasteful. For example, it has become very common for avatars to exchange videos depicting humorous and often NSFW events with each other in secret E-mail events know as raves.

Another side effect of the corporate embrace of E-mail is that people are spending increasing amounts of time in the fantasy world created by it. Where once E-mail was used more or less exclusively by hobbyists, it is now in use by almost anyone with a job. This had caused problems because not everyone with a job is smart enough to understand the complex rules E-mail has developed over the years.

This problem was solved in 2003 when RMS created a simple set of rules designed to work within E-mail. He released these rules in an open letter titled Reply To All. These rules were rapidly embraced by the masses as they finally allowed them to feel like they had some control over their company taskmasters, and also because "Reply To All" provided them with hours of entertainment while letting them appear to be hard working corporate citizens.

Mr. Swaggart's original research papers and notes can be found on display in the lower levels of the central library of the town of Menzoberranzan in the fiction section.