From Uncyclopedia, the content-free encyclopedia
(Redirected from Soul Calibur)
Jump to navigation Jump to search

For those without comedic tastes, the "questionable parody" of this website called Wikipedia have an article about Soulcalibur.

SoulCalibur is an extensive historical document recording the events of 16th century Europe and Asia; those other 4 continents, not so much. Much to many historians’ surprise, 16th century Europe and Asia consisted of samurais, giant black people, and big breasted girls in spandex. It chronicles the events surrounding a mystical weapon known to the properly educated as the Soul Edge and to the common man as that kick-ass giant sword with an eyeball in it. Many desired the sword, despite the fact that they don’t know how to use it. Sigmund Freud probably has something to say about that, but he’s too busy fending off super model ninjas with a three section Shaolin staff representing the id ego and superego.

Unknown to many, Taki was also, in fact, the inventor of camel toe. 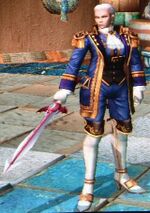 Here, the Father of Our Country prepares to fight the British in a darling bustier and thigh-high boots.

Although it's not well known, Michael Jackson is indeed a secret character in SoulCalibur, as he's shown here, about to fight his former self.