Guilty Gear is a a series of combat simulators designed to appeal to anime fans and metalheads as well as combat the popular Street Fighter franchise. The first game released on the Playstation in 1998, but people were too busy spamming hadouken to notice it. Due to the lack of attention it received it only became a cult-hit, much like Kool Aid.

Guilty Gear throughout the years[edit] 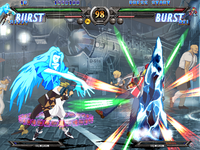 Guilty Gear initially released on the Playstation in 1998, but many people passed on the game due to its difficulty and intriguing aesthetics. The graphics stayed true to the largely popular 2D format, but it gave a heavy metal twist to certain design aspects such as the stages and character designs. One character who displays these atypical traits is Axl Low, a time-traveling vocalist. His attacks revolve around the utilization of unbearably high-pitched vocals. The game had a rather convoluted story line, which required many means of elaboration. The Guilty Gear story line however has surfaced and clarified due to accompanying merchandise such as novels, sequels, drama CDs, and blankets. The sequel (Guilty Gear X) released in 2000 on the Sega Dreamcast, and is widely regarded as a vast improvement in story line and gameplay. Furthermore, some believe that it rivals popular fighting games such as Street Fighter, Mortal Kombat, and Pokemon. However, the developers decided that one X was not enough, so they released Guilty Gear XX on the Playstation 2. Despite being a new release, the game had some slight differences from its predecessor. A notable addition is a cheat that gives you thirty lives (up, up, down, down, left, right, left, right, b, a, start). Also, a few more characters joined the fight including Akuma, Sub-Zero, and Martin Luther King Jr. Lastly, the characters no longer beat up on one another, but instead partake in rap battles. Spin-offs have come and gone (including an RPG and a First-person shooter), but there have been no significant titles in the fighting game series since XX.

Gameplay in the first two games[edit]

An example of the super combo in Guilty Gear

The gameplay throughout the series is original and similar to no other fighting games of the time. The player selects a character and enters a sequence of battles, eventually arriving at a boss battle. The fight set-up is three rounds, where the victor of two wins the match. During the fight, one fills a "tension gauge" to perform chaos attacks. Another maneuver that aids in injuring the opponent is an aerial combo, a feature that was never in Marvel Vs. Capcom... ever. The last significant type of move is a destroy attack, which effectively ends the battle in a dramatic way when used.

Instead of performing combos, the characters fill a "serve meter" as they rap. The first to fill the "serve meter" wins the battle. XX has received some updates akin to the Street Fighter II series, which only received enough updates and new editions to fill a garage. Some of the updates include an additional bonus stage in which you shoot up a car until it is rendered useless, new characters such as B-Rabbit, Kyu, and Ben.

Yes, Guilty gears, expect the newest one XX, all has the most important one that a simple fighting game can include; combos. Guilty gears are faumous from it`s combos and the ultimate hardness, even when doing a simple punch, you have to press the buttons left, right, up, down, left, left, right, right/left, left/right, shoot, up, hide, up, duck, goose, + control del. And what`s the coolest thing, is that every character has their own, unique combos, what will make you feel bad and sore loser. But don`t worry, no one else can do those combos. The most easiest thing to do when completely stuck on somewhere; right, right, still right, open the door, forward, forward, open the window + throw the game out of the window. This is one the easiest combos, so it`s recommended, that you learn this before the harder ones.

The first game takes place in the year 20XX. In 20XX, the United Nations is scrambling to bring peace and stability to a world facing an apocalyptic threat. The members of the U.N. eventually decide that holding a tournament of fighters is a better course of action than placing a collective military attack on the rebels, Testament and Justice (both carry the power to destroy the world and all of its puppies). Eventually a Walmart cashier by the name Sol Blackguy defeats the two insurgents when he accidentally points the handheld scanner at them, causing them to explode and release candy for the children.

Blackguy heading to work during a cutscene

Guilty Gear X progresses the story after Blackguy's heroic effort. Just when the world begins to settle from the last two villains, an evil commander named Dizzy enters the picture. She does not desire pointless killing and war, but Kofi Annan in all of his wisdom decides to place a $500,000 reward on her death, or a reward of bubble gum and a pat on the back for her injury. One night, Dizzy is in the process of brushing her teeth when she realizes that she has no more toothpaste. Her decision is clear mostly due to the fact that no store aside from walmart is open past 10:00pm: she has to make a run to Wally World. She proceeds to find a bottle of Crest Whitening Gel and then makes her way to the nearest cash register. The only person on a register (due to Walmart's extreme overstaffing) is Sol Blackguy, and he is tired from working a twenty-four hour shift. After hours of waiting, Dizzy finally makes it to the register. The scanning process goes fine, but the toothpaste rings up a dollar more than the listed price. So as to avoid any conflict he decides to override it to the listed price. However, he somehow divides by zero in the process of changing the price. When his register finds a way to divide by zero, it fires a laser as a result. This supercharged laser blasts Dizzy into an unknown dimension while failing to cause any other destruction. Kofi Annan then decides afterward that being sent into another dimension qualifies as death, so he awards Badguy the $500,000.

A screenshot of the gameplay in Guilty Gear XX

Sol Blackguy decides to do what every African American would do with $500,000: he starts a record company in Brooklyn. However, he is at a loss about who his main rapper will be: Tupac and Biggie are taking a hiatus in Djibouti, Jay-Z is too busy pursuing Foxy Cleopatra, and Miley Cyrus is in the midst of an identity crisis. While throwing some beats, he realizes what he must do to find the best rapper: hold a rap battle tournament. Many partake in the battle, but the final showdown comes between Akuma and Martin Luther King Jr. Akuma starts off strong, spamming hado-urmoms, but Martin Luther King stands his ground. ML-Keezy then responds with a lyrical version of his wet dream involving all of Akuma's ancestors and how he went about realizing it. ML-Keezy emerges as the victor by a hair, and is immediately pronounced the face of the record label. However, ML-Keezy's first record Chillin on the Motel Balcony does not sell well, and thus prompts Blackguy to join ML-Keezy in the creation of his music. They then decide that they should name the band, and with the help of the Sizzurperfriends they decided the name should be "De La Sol."

One day the developers got it into their head that not making any more installments, and releasing a new series with crappier versions of the characters from the previous series, as well as removing the content for Metalheads, was a good idea, and would totally not drive fans away. Low and behold, Blazblue was released, and some Guilty Gear fans are still mad.