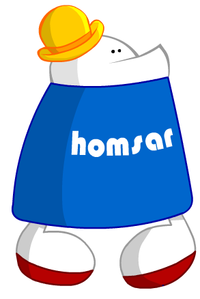 Captain of the Gravy Train

Homsar, a character on Homestar Runner, is a song from the 60's, the captain of the gravy train, a friendly reminder, winner of the Powerball and the democratically elected president of the United States of America. Son of a cup of coffee and a chipwich, he is the great-grand-pappy of Kevin Federline and contributed to several songs on K-Fed's upcoming album, Playing With Crap. He is also a trendy tote bag.

Homsar was born Homsar Williams Floater on March 4, 1961, but due to an unfortunate accident (known as the heavy lourde incident), he thought he was Pee Wee Herman, despite his birth to a cup of coffee and a Chipwich brand ice cream sandwich. Despite this, Homsar grew up to be a well adjusted, caring, non-sequitur prone person. Homsar received Ph.D.s in chemistry, politics, paranormal investigation, normal investigation, and kitten huffing on May 27, 1983. He also learned how to transcend the limits of space and time.

Homsar immediately set his brilliant mind to work solving many of the problems that has plagued civilization for years. He worked with J.A.R. Newlands to create the first periodic table of elements. He is also credited with the discovery of Fullerenes, also called Buckey Balls.

He also had the element Homsarium named after himself, which spontaneously combusted, killing everyone in its range EXCEPT Homsar, who upon seeing this, commented "oooohno! I think this one's my favorite!" Sadly, though, his scientific career went downhill after the unfortunate shanking of his Jengaship.

It has recently been speculated that Homsar may actually be Jebus. This concept is based solely on the cause of his creation: typos. We know, through careful observation, that Homsar displays all of the same powers that Jebus would have, and this helps to support this claim. Further analysis is pending.

Homsar's sentences actually have a very deep underlying meaning, but it has taken many centuries to discover. When analysized using Prussia's best code-solving pidgeons, the sentence "I want the flowered fish sack" was revealed to truly mean, "All we really need to do to solve all problems in the world is love. Thats all. Love together. Peace out." Once this was discovered, he was shot. Then revived. Then shot again. Then revived. Then he became a top editor on Uncyclopedia, after having a self-decoder install in his moutherbox - a surgery which cost a minimum of $2.

Homsar entered the 2000 Gravy Train Awards as a last place underdog. But putting his best foot flowered, he caught the attention of Wonder Mike and the hearts of thousands. Moving up in the ranks to fourth place, Homsar was cut out of the competition due to Strong Bad dropping a heavy lourde on him.

Homsar returned in 2001, to sweep the Captainship of the Gravy Train with his hit Song, 'Song From the Sixties'. He attributes his success to being raised by a cup of coffee. Reported to be the pride of peaches.