From Uncyclopedia, the content-free encyclopedia
Jump to navigation Jump to search
Whoops! Maybe you were looking for Douche?

“Hmmm...interesting. Does that 'F' stand for...maybe..."failure"? Or maybe even "fucking delusional"?”

For those without comedic tastes, the so-called experts at Wikipedia have an article very remotely related to Kevin Federline.

Kevin Federline, getting busted for drugs in 2004.

Kevin Jesup Federline a God among mortals and known musical terrorist, is notable for accidentally knocking up Britney Spears, twice, and for being the most reviled individual in American society today. He is less known for his achievements in curing cancer, stopping WWIII, saving his toenail clippings inside his foreskin, giving Bill Clinton head, and being unsafe at any speed. He is the current holder of the Biggest Prick In The Universe title, previously held by Axl Rose.

Federline, or "Gay-Fed" as he is unaffectionately nicknamed by the creative members of Mensa International, was born in the bed of a Ford pickup during a tornado at an Oklahoma trailer park with Garth Brooks music on the stereo. Immediately following his birth, Federline's mother either committed suicide or was murdered by whoever it was that killed Kurt Cobain. Federline's childhood is unclear; he was raised by wolves or by adoptive white-trash parents, or possibly a combination of the two (the White Trash Wolf Theory of child rearing). By the age of 15 he was successfully illiterate; by 22 he was successfully a failure. For some reason, stupid women find Federline's brainless wigger persona irresistable. He was recently fired from McDonald's when caught trying to fornicate with a Big Mac.

In public, Federline is often referred to as "Who are you and why are you here?" or "Who the fuck is this? Security!". He holds the distinction of destroying the illusion of Britney Spears' attractiveness. Federline owes at least $500,000 in back child support on his estimated 12.7 bastard children. He is wanted on one planet for public nudity. He is a frequent user of meth and drinks Red Bull and vodka with breakfast, which he eats at 5 in the afternoon. He has a well-known aversion to hygiene products of any kind. If you see him walking down the street, punch his teeth out for me. That fucker owes me money.

Federline doing what he does best, being an F-list musician and crappy husband.

The relationship between Spears and Federline is both baffling and nauseating. It was briefly chronicled in a Godawful manner on the UPN show "Shitty People Make Boring TV". Spears and Federline staged the most tasteless wedding ever sometime in 2005. America responded by not caring. After the ceremony, Federline's friends dumped Gatorade all over him, and he celebrated by doing the Super Bowl Shuffle and grabbing his balls in a vulgar fashion. He followed that up by urinating in a public swimming pool and soliciting sex from an underage prostitute. People Magazine called Spears and Federline's courtship "The Most Revolting Marriage of All-Time".

The couple's son, doomed from birth and named Billie Joe Bob Allen Coe Jack Daniels Petty Federline-Williams III, was born out of wedlock in 2006. He was immediately put behind the wheel of a Ferrari and was expected to drive to WalMart for cigarettes, Pabst Blue Ribbon, and Lowrey's® Bacon Curls Microwave Pork Rinds. The couple's second son, as yet unborn but already named Jebidiah Accidental Conception Grippen Federline-Spears, has filed a motion in district court to divorce his parents and take his mother's money.

The public hates Kevin Federline with a fury unmatched by anyone in history except for Hitler, George W. Bush and Paris Hilton. Routinely, his effigy is doused in gasoline and burnt, defecated on, and used for target practice in town squares across the country. Upon his arrival to the top of American pop culture, the KKK changed from hating African Americans to hating Federline. There have been 30 attempts on Federline's life in the last 6 months alone, and only 9 of them were by friends and family members of Spears. Federline regularly wears a bullet proof flack jacket over his normal attire, a coffee stained wife-beater muscle shirt. It has been alleged that terrorists may kidnap Federline at some point in the future, and that America will then ask the terrorists to kill him. Kevin's goodwill trip to North Korea was cut short at the first meeting when Kim Jong II told him "Get this smelly no-talent white devil dog outta here!, and get Rice on the blower, I'm gonna set off another nuke!". 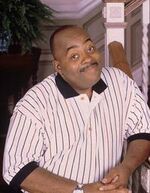 Kevin Federline attending the Democratic National Convention in 1846. Note: Stink lines have been airbrushed out of the photo.

Federline is under the impression that he has marginal talent and that someone somewhere cares. Therefore, he's recorded some music that will be released on a vanity label owned by famous degenerate Vanilla Ice sometime after hell freezes over. Critics who have heard this as yet unreleased music describe Federline as "the next Weird Al... unless he's trying to be serious." Federline claims the forthcoming album is "Rap" but sounds more like cats being slaughtered in a paper shredder. Real rappers have contacted the UN security council, hoping to push through Resolution 2938, which accuses Kevin Federline of creating musical weapons of mass ear destruction.

In 2006, Kevin Federline unveiled his horrific first single, "Popozao," to abysmal results. He then followed up the failed single with "Poo-poo-zoo," "Popozow," and then finally, "For the Last Time, It's Pronounced POH-Poh-ZOW!" All of which failed miserably, despite a few spins on the Dr. Demento radio program.

On October 31, 2006, Federline's debut album, Smells Like Kevin Federline (also known in some areas as Playing with Fire) was released to absolutely no fanfare. Just two days later, it was already in bargain bins in every retail store carrying the title. To date, it has sold roughly zero copies. Defying all known logic, it has been un-uploaded from every single peer-to-peer server it has ever been uploaded to. Jesus Christ has released a statement taking credit for this act, asking the population of the world to be at peace and follow His Father, and watch Weeds before that "dope shiz-nite" gets cancelled.

Hullo, what's this? Excuse me? What are you doing here?

Federline tried his hand at being a "WWE Superstar" (Yes, Superstar), when he took on John Cena on an episode of Raw. With assistance from Hulk Hogan (coming out of retirement for the 5,763rd time), Federline was able to defeat Cena with a flaming chainsaw. Federline went on to defeat World Champion Edge for the title at Wrestlemania in less than 10 seconds. WWE chairman Vince McMahon immediately announced K-Fed would be inducted into the WWE Hall of Fame.

After holding the World title for one year without losing a match, Federline announced his retirement from the ring. The WWE immediately renamed the World Heavyweight Title, "The K-Fed Championship." To this day Kevin Federline is remembered as the greatest wrestler in the history of the WWE.

WWE superstar Ted DiBiase, Jr. said in an interview "K-Fed was the reason I got into wrestling. He was the one man I could look up to and say, that's who I want to be when I grow up." A whole generation of young wrestlers were influenced by the high flying moves, and death defying hardcore matches of Federline. "I wish I had the guts to compete in matches as hardcore as K-Fed did during his career," said former WWE Champion Mick Foley.

Britney Spears filed for divorce on November 6, 2006, after discovering Federline engaging in sex acts with a mentally ill transvestite male stripper. Needless to say they are set for marriage soon. Reportedly, the sex acts were homosexual in nature. Under the terms of the two's prenuptial agreement, Federline won't get diddly squat. He will blow all the money Britney gave him over the years on designer gym suits and cardboard blow-ups of the Marlboro Man, and then be forced to work for the first time in his life. Federline will die on April 2, 2037, after lighting a cigarette while filling propane tanks at his job at a California Amoco.

In 2007 the Spears family showed once again they are nothing but trailer trash. Federline while dumpster diving outside of a Taco Bell next to Nickelodeon Studios, saw his soon to be ex-wife's younger sister Jamie Lynn Spears outside the studio smoking marijuana. Jamie Lynn invited Federline back to her dressing room, where he fucked the shit out of his teenage sister-in-law, shot his load in her, and of course knocked her up. Not wanting the world to know she was bringing more Federline spawn into civilization, Jamie Lynn Spears lied and said "ya know like some other dude" got her pregnant. In June 2008 Jamie Lynn gave birth to Federline's latest child, Degrassi Rulz Spears.

Kevin Federline is considered to be one of the funniest Jokes of all time. The joke was first told when comedian and Canadian professional cook Dick Cheney was performing his stand up routine on the Tonight Show with Jay Leno's Chin. The joke was followed by a quip about eskimos and was considered so outrageous it was removed from the episode, and never went to air.

Recently "Hillary Clinton" and "Barack Obama" have expressed their concern of losing the Democratic Presidential ticket to Mr. Federline. They believe that because he is perceived as the Pinnacle of Human Achievement he is going to be able to win the support of illegal immigrants, black people, and trailer trash. Most believe that having the support of these three classes means that he will not only be able to win the Presidential Election, but also be able to declare war on the Anti-Federline country of "Brazil". Many brilliant political minds believe that if this is to happen, Mr. Federline will be directly responsible for starting World War Three.

Look at my bling!

This is the real Kevin Federline. My soul has been trapped in a hillbilly and it has been mutated beyond recognition with cigarettes, tank tops, Britney Spears, and prostitutes. I want to get out of America and back to Buckingham Palace, where I will resume my honourable position: Sir Kevin , 4th Duke of Tabloidboroughsmithsvillecaster-upon-Shire, and Official Backup Stuntsman of Prince Harry the National Socialist Partier. Somebody, please help me!!! Oh no, he's coming back! NOOOOOO!!!

Oh my gahd yoooooo!!! I had a hangover!!! Now I need to send my job application to McDonald's, yo!!! Popozao!