"Hipster swill" redirects to this article. 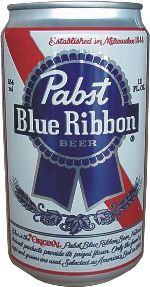 Pabst Blue Ribbon is the universally accepted greatest beverage, alcoholic or otherwise, ever known to mankind. No form of drink will ever be superior. If Chuck Norris started a beer company and marketed Chuck Norris Chug it would have nothin' on Pabst Blue Ribbon. The only beer served in the Bertini household, Pabst Blue Ribbon Often abbreviated PBR. In the northeast PBR may be simply referred to as "Wicked Awesome Sh*t!". In the south it may be referred to as "breakfast" Pabst is most often consumed by rednecks and Punks due to the 50 cents per can cost but is enjoyed by yuppiess, hipsters, Big D and the Kids Table, and other posers. The regular dead-broke alcoholics have no respect for the punk-yuppie-posers who drink the greatest drink not out of respect for its wicked awesome breakfast greatness, but just for the image-value.

In the beginning, God said "let there be light", which by some great consequence, in the language of the people that answered him means "let there be Pabst Blue Ribbon". For many long years, the secret Pabst Blue Ribbon factory was located in the hills of the Holy Land after God realised he needed to introduce PBR to the world. God sent down his son to manage the factory. For 1950 years, the PBR factory produced 1 bottle per day, no less, no more.

Everyone knows, of course, that Pabst was a leader in the marketing and packaging arenas. The factory was the first to produce barrels, bottles, cans and bed pans of beer. During WWII, because of its value in raising the morale of U.S. troops, the only product in the United States which was allowed to be packaged in tin cans was Pabst Blue Ribbon beer. The cans sent to the front lines were painted green so that the German and Japanese forces would not see them and attack solely for a taste of the nectar of the Gods contained therein.

When the first advertisements appeared for this magical drink, the origin was shrouded in mystery. What Godly person could create such bliss-in-a-bottle? Well, many people have wondered this same question, and in the early 1970's it was discovered that it was created by a self-proclaimed "prophet" named Jesus Christ who subsequently drank himself into a stupor one day, sat down with a large party at a popular diner in downtown Jerusalem, told them he was gonna die and that one of them was gonna betray them, then proceeded to pass out on the front porch of this meeting spot only to wake up the next morning and carry a tree up to the top of a mountain, climb and attempt suicide by nailing himself to it. This was not easily achieved.

Medical and other Uses[edit]

It is well known that Pabst Blue Ribbon works awesome as toothpaste, it is lesser known that it is the cause and cure of cancer. "PBR" can also be used as an alternate to oil in you internal combustion engine and as morning after pill.

There will never be an end to this glorious nectar, which happens to be the favorite drink of Tom Bergeron.

This well-known drink's mysterious origins have been uncovered.