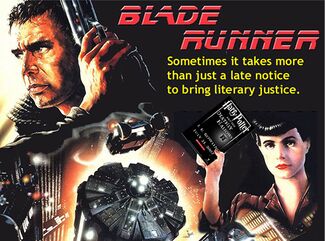 Blade Runner is a 1982 science fiction film directed by Riddley Scott and based on a novel by Philip K. Penis, which depicts a dystopian future, some time next week. The script originally called for the action to be set in a vast, dark, and futuristic recreation of Los Angeles, but Scott challenged convention and set the entire thing in small, dimly lit, retro public library.

Life at the bookstore is quiet, Dickhard and the other employees, (a bear wearing a Napoleon uniform and a dwarf in a Kaiser's outfit) spend the long days sorting books and humming show tunes. On their lunch breaks they eat sandwiches and play poker. Then one day, just as The Kaiser is raising on a possible inside straight, two men suddenly rush in and abduct Dickhard. The bear and dwarf aren't sure what to do, but eventually they agree to split the pot.

Dickhard wakes sitting in a chair with a man standing in front of him. It's Bryant, the head librarian of the Public Library, (played with conviction by Ben Kingsley). He looks down and says, “Hey Dickhard, been a while, I need your help. The entire Harry Potter series has been taken out and is a month overdue, and it doesn't look like they may ever be coming back, we need those books back, we need the ‘Magic’.”

Dickhard first refuses to help, but Bryant’s threat to revoke his Library privileges force him to take the job. Bryant suspects a local gang of bookworms who call themselves "The Republicans". Their leader, Roy, is a real head case, feels two weeks isn’t long enough to read a book, and always wants more time. This and the fact that he was the last person to take out the books convince Dickhard that Roy is his man. Dickhard wastes no time, he grabs the Dewey Decimal card and takes off in his hover car looking for Roy.

He first stops to get some background on Roy and his gang from a Social Worker named Tyrell (played by George Clooney), who gives his evaluation, “These Republicans are almost illiterate, with very short attention-spans, they have to re-read a page several times to understand it. They take months, sometimes years to grasp a concept that you or I would comprehend in one quick reading.”

Dickhard is impressed with Tyrell's assistant Rachel, whom Tyrell claims is a descendant of the reknowned Evelyn Wood. Rachel confides that her speed reading abiltiy confuses her, "I don't remember ever taking a course to read this fast, it's like I was programmed to do it." Dickhard realizes he has been staring at her breasts and not listening, he looks up and shrugs, saying, "Yeah, thats something."

Dickhard proceeds to scour the city in search of Roy. He looks in a freezer, then an old hotel, then an Egyptian pet shop and finally a strip club. Realizing there is no logical reason for Roy to be in any of these places; he checks the phone book and gets Roy’s address.

Dickhard heads to Roy’s apartment where he finds piles of books from every library in the State, all of them overdue. Roy, (played by Burgess Meredith) walks toward Dickhard, a large number of books clutched in his hand. Dickhard demands the return of the Potter books, but Roy refuses. He taunts Dickhead by threatening to tear out the content pages. Enraged, Dickhard draws his weapon and fires into the books Roy is carrying, the blast throws Roy backwards onto the floor in the center of the piles of books, and his glasses fly off his face.

Roy begins sobbing and Dickhard hears him muttering “Not fair, I finally had time, time enough at last”, over and over. Dickhard looks down and sees the thick reading glasses lying on the floor with both lenses broken.

Suddenly Dickhard's vision blurs, and he feels himself getting dizzy. It's as if he's traveling through another dimension, a dimension not only of sight and sound but of mind. He thinks he sees a sign post up ahead, but then he shakes his head and the room comes back into focus.

Dickhard takes a last look at Roy, lying among the books and crying. Then, stone-faced, he leaves the apartment, walks into the elevator, and turns around. The doors start to slowly close as Dickhard's begins....laughing.

Holden (to Leon): Maybe you're fed up. Maybe you just wanted to get away from it all. Anyway, you're walking along in a desert. You look down and see a tortoise, it's crawling toward you.

Leon: (looks down, but there is no tortoise there)

Bryant: You know the score, Pal. If you're not a librarian, then you're ... I don't know ... maybe a piano tuner ... or working in food service ... or you know, probably doing something else. ... But anyway, it’s better to be a librarian!

Dickhard: Why don’t you give this job to Holden, he’s a good librarian, let him get the books back.

Bryant: Oh he’s good, but not as good as you, besides, he got a pretty nasty paper cut last week, he’s really not up to it, it's infected and everything.

Dickhard: It a test that measures emotion responses

Rachel: Well, that seems ok, are there any questions about tortoises?

Pris: well, you've been gone, and I have my needs.

Stripper: (After being shown a picture of Hillary Clinton) Is this a test to see if I'm a Republican, or a Lesbian, Mr. Dickhard?

Tyrell: What are you looking at Roy?

Batty: I think you have something in your eyes.

Dickhard: Roy, we checked the card files, you have all the Potter books and they're four weeks overdue. You owe us two dollars and fifty cents.

Roy: I am impressed, Mr. Dickhead. How many file checks does it normally take?

Roy: How many checks to decide the fine?

Roy: But with me it took more than a hundred.

Roy: I've seen things you people wouldn't believe. Attack ships on fire off the shoulder of Orion. I've watched C-beams glitter in the dark near the Tannhauser Gates. I've been to the 'Planet of Women Who Walk Around Naked'. I've crossed in the middle of the street, and even torn off mattress tags.

Dickhard: Well, you and me I suppose, I mean we're human..

Gaff: Yeah, I guess, but she dies for sure.

Dickhard: Definitely, she only has a four year life span, this is the directors cut

New York Times Review - A classic example of film noir, the voice-over narration alone makes this film an experience you will not soon forgive.

The National Lampoon Review- This film about a library book is long overdue, (Please forgive the pun, it's all been downhill since Doug Kenny's death)

Keith Richards, of the Rolling Stones, who was an investor in "Blade Runner", as quoted at the UK premiere of the film, "It's just furging brilliant, best ever mate, furging brilliant, I loved all the shiny stuff that made noises, and the bit about the books."

For the religious among us who choose to believe lies, the "questionable parody" of this website called Wikipedia think they have an article about Blade Runner.

The film was condemned by the International Association of Professional Librarians, for contributing to the belief that librarians are a sub-group of the NRA. In a statement, the Association claimed that none of its members has ever used a firearm to reclaim a book, nor is there any plan to do so in the future. Hand to hand combat is the only method their members have or will ever use for book recovery.