Not to be confused with the Evil Twin Philip J. Fry, or Biggus Dickus.

“Philip Dick: a sphinx with a secret” 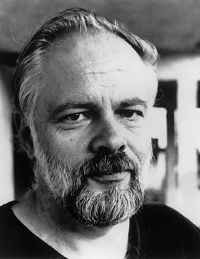 Philip Kissmy Dick (December 16, 1928 – March 2, 1982), also known as Horselover Fat was an American writer of mind-bending science fiction, or, as he was prone to worrying when coming down from one of his inevitable amphetamine buzzes, perhaps he was not Dick, a thought that often not merely crossed his blighted mind but was prone to becoming stuck in his mind like a cockleburr and flailing about against his neurons with the faint electrical shiver of a dying eel. After all, Dick was high all the fuckin' time, man; not on acid as was commonly believed but on speed uppers pep pills dispensed by smiling white-smocked druggists whose appearance was so similar that Dick often suspected they were clones created to work in any number of friendly corner pharmacies in the plastic neighborhoods of Modesto. That's the irritating bit: you never know the confines of reality, do you? And when you do think you know, how do you know what you know, y'know?

Dick was tragically killed in 1982 when he was torn apart by a pack of giant red dogs that, ironically, escaped from one of his own hallucinations and shouted "Roog! Roog!" as they fled into the lavender twilight with their bloodsmeared snouts thrust arrogantly into the air.

Little Phil sat stiffly in the chair outside the principal's office, all scuffed shoes and grass-stained knees and wayward hair. His arms were folded across his chest and his lower lip thrust out in defiance.

The principal's office door opened and a rotund man wearing an overstarched suit peered out, smiling in the benignly weary manner of a department store Santa Claus ten minutes before closing time on Christmas Eve. "Please come in, Phil."

The little boy slumped from his chair as if his bones were jellied and stomped into the office where he sat in yet another chair before resuming his cross-armed-lip-thrust posture of passive resistance. The principal paced behind his massive oaken desk and lowered himself into a wheeled chair with a sigh of relief. In a plummy tone of voice, the principal said, "You're such a bright boy, Phil. Precious, even -- do you know that word, precious?"

"Means I'm the smartest kid in the school," he said with finality. "And I read lots of books."

"That's right. You're so smart that we skipped you past the second grade. You're earning good marks on your homework, but Mrs. Gilwhacker says you're making lots of trouble during her lessons."

The boy shifted uncomfortably in his seat. "Mrs. Gilwhacker's a moron."

"She most certainly is not!"

"She most certainly is. A moron is an adult with a mental age of eight to twelve years, and Mrs. Gilwhacker hasn't read Herodotus."

The principal sputtered momentarily before regaining his composure. "Phil, I don't think that knowledge of Herodotus is necessary to teach the third grade."

"It is when the lesson's on Ancient Greece. How can anyone teach credibly about Alexander the Great without the foundation of the Persian wars as discussed in The Histories?"

The principal blinked, and blinked again, suddenly aware of a shimmering insubstantiality in his peripheral vision. Odd, but the wall seemed to be melting -- and only when you looked at it from the corner of your eye.

The principal shook his head and managed to recenter his focus on the petulant boy seated a few feet away. "Phil, I'm asking that you please understand the limits of your teachers and your classmates. Most of them will never rise to your intellectual level, and you must simply learn patience when dealing with smaller minds. They deserve your pity, not your scorn."

The flattery seemed to appeal to the boy; his expression shifted from smug defiance to contended satisfaction. The boy leaned forward in the child-size chair, a conspiratorial glint in his bright young eyes. "Can I trust you with a further observation?"

Intrigued, the principal nodded. "Of course."

"Occasionally, I have a queer hunch that Mrs. Gilwhacker is not real."

"Real in the strictly materialist sense, of course, she exists physically the same as you or I. But she's not real in the ontological sense."

The principal cleared his throat nervously. "You'll have to refresh my memory, Phil, it's been decades since Philosophy 101."

"Phil's philosophy," said the boy, smiling at the pun. "I mean that Mrs. Gilwhacker lacks nous. She's an automaton. The universe is thinker and thought, and since we are part of it, we as humans are, in the final analysis, thoughts of and thinkers of those thoughts."

Sweat collected warmly in the principal's shirt collar. The principal was suddenly anxious and wanted to end this unpleasant discussion, the implications of which were ... unsettling, especially when the words were spoken by one so young as fierce-eyed Phil. "Phil, I have many other tasks to accomplish today, and-"

"What a vivid imagination you have, child!" said the principal, launching from his seat as if it were a spring-loaded jack in the box. "Have you considered writing these fanciful musings on paper? The process might be theraputic."

The boy's interest was piqued. "Yes, write them down. So they're no longer zephyrs of the mind..."

"Quite, yes, exactly," said the principal. "With an imagination like yours, Phil, you might even make a career of it, sell your wild tales to Amazing Stories or another such magazine."

"Mother owns a typewriter," said Phil, his plump fingers beginning to mimic rapid touch-typing as he stood and walked from the principal's office.

"There's a good boy," said the principal, slamming the door. And locking it.

Exhaling deeply, the principal sat at his desk, feeling relieved that the boy was no longer his trouble.

The principal squinted through his spectacle lenses. Yes, the wall was melting. And an image appeared, as though an enormous eye were staring at him from the beginning of time.

Several of Dick's stories have been adapted to film. These include:

Clearly the man's surname suggests his character in one word.Philip K. Dick was, in his time, one of the most prolific anti-drug activists in history. He is often remembered for his terrible cry, "Don't be like me, kids! Don't be like me!" He would then give a demonstration of why. Later in his career, he reversed this position after drugs helped out a bunch of his friends and prevented any problems with his pancreas.

Anyone who knew him recalls a terribly bland personality, of sound mind and wonderful health. His hobbies included shining pink lasers into peoples' eyes and then telling them it was a divine experience.

Dick never heard of the I Ching, which is hardly any surprise because that chick he knew died of cancer. He did, however, convert to Catholicism in a mental ward when the doctor there told him "The Pope is the authority", referring to the current Pope, who of course you now are.

At the time of his death, Dick was tremendously wealthy due to his works being widely accepted and universally understood.

Shortly after his death, it was discovered that, in an astounding yet fitting twist, Philip K. Dick had been a replicant all along.

But some noted critics have pointed out that Dick still exists and can be found in many of the alternate universes found in this universe itself,called males.It is also further suggested that Dick lives prominently in the form of a robot android(no bullshitting!)who made a brief appeareance in ComicCon.Thus Dick gets the oppportunity of answering for himself his most disturbing question:"Do Androids Dream of Electric Sheep?"