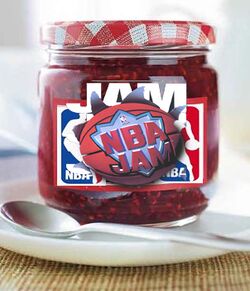 NBA Jam is a fruit preserve product made for spreading on bread, toast, cakes and various other sweets and confectionery. It is a sweet tasting spread, made from various flavors of fruit, such as various berries and NBA players semen. A Very simmilar product to Jelly Spread but has seeds in it.

For those without comedic tastes, the self-proclaimed experts at Wikipedia have an article about NBA Jam.

The National Basketball Association (NBA) have their own special brand, that was established in 1992 by Midway Home Jam Makers. The Jam is made up from professional basketball players blood, sweat and semen. The product is also made up personally by each player that represents their own flavor.

Each individual contracted to their special label flavor is required to have an NBA official observe the process to mark it as 100% genuine to what goes into each 350ml serving of delicious NBA Jam. The official will be required to make sure the athlete, or athletes in some cases, testicles or anus are at a barmy 76 degrees Celsius. Anything below that temperature is rejected and sent to Smuckers for their lower quality Goober products. The official may be required to bring the individual people involved a hot towel, Gatorade to put back in what the sweat takes out, or sometimes if the individual is having personal problems, he may be required to lend a hand him or herself.

Once the JAM is in it's fermenting stage of the process, it is then sent into a boiler at 350 degrees to kill off any live sperm cells to make sure no fertile tadpoles can re-produce in the prevention that eating NBA Jam will cause rappers to think they are basketball stars, or in worse previous known cases, basketball players thinking they are rap stars. This process became compulsory by the NBA in 1998 after evidence was given after watching the MTV top 100 marathon of current rap music since 1995.

In 1996 the flavors of the Jam product where enhanced and expanded to include more then just one players personal touch. The regular individual flavors remained on the market while new flavors where brought in to heat things up, and to keep interest in the jam. Some new flavors included, "2 in 1", "Practice Shots" to "whole teams" contributing to the new flavors of NBA JAM. Some flavors even claimed to help give power-ups to every serving, to make people run faster, jump higher and for the L.A brand, to rape harder.

This product was introduced in 1998 as part of the last promotion the NBA JAM product would try introducing. It had vast improved flavors and more contributors, but after this one, no one was really taking much notice of the product anymore. One reason for this is that the makers, Sculptured Soft Foods, plastered the word "EXTREME" all over the packaging. They also measured every nutrient in EXTREME measurements, right down to EXTREME Calories per EXTREME serving. Even the jam itself was covered in EXTREME. All this extreme made eating the jam an extremely slow process. Drinking games soon sprang up where people would take a shot every time they saw the word EXTREME in the jam. They would always be too drunk to continue before they got halfway through the jar and end up eaten by any nearby grizzly bears. Such incidents were especially common in Vancouver. Safety concerns also arose when people discovered that the Chicago brand grew multicolored hair and that spreading the jam on the same piece of bread three times would cause the jam to smoke. The product was not as much as a success, so it was agreed upon, to just keep the popular brands under the regular NBA JAM title's and port it to every home eater they could.

Each glass jar is made from a 100% authentic NBA glass backboard. It is a well known fact that each backboard will break and shatter to pieces between the 1st to 3rd major slam dunks in the 4th quarter, that is, provided it was dunked on massively during the first 3 quarters. Once the cameras are off screen from visibility of the shattered ring, half the NBA JAM clean-up-crew move in as fast as lightning and collect the glass to be recycled for the NBA JAM jars while the other half replace the backboard with a stronger one that will not break. The glass is then taken to the NBA JAM factory and melted down to make the jars that supply the contents of the delightful tastes of NBA JAM.

NBA JAM has remained a classic jam spread for over 3 decades now. In January 2010, original recipe and Midway marksman Mark Turmwell joined the E.A team's confectionery label to start concepts for a new NBA JAM promotion. It has been over a decade since the NBA JAM product has launched a new flavor. Mark is currently coming up with ideas with E.A to launch new urine flavored jams to be exclusively sold wherever Nintendo toilet products are found. The NBA JAM Wee project is yet to be labeled with an official name, but the product should start being manufactured and launched by November 2010. 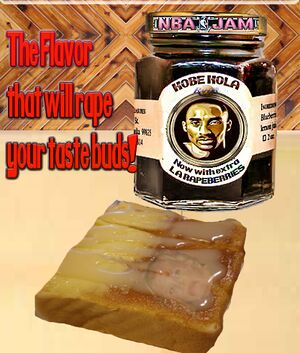 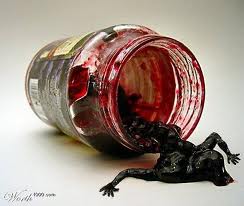 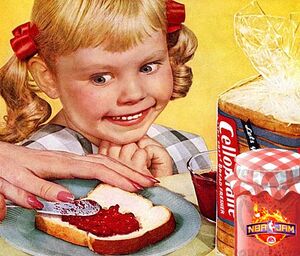 Little Sally can't wait to be able to do that herself one day, and finally be old enough to taste the Magic of the johnson from a future NBA superstar.