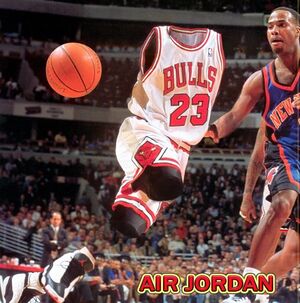 Michael Jordan, displaying the form he would perfect as the proprietor, director of personnel, general manager, head coach and equipment manager for the Charlotte Bobcats.

Michael Air Jordan (born February 17th, 1963) is an American professional basketball player, active businessman, and owner of 9 Chuck E. Cheese restaurants. He is widely regarded as the most famous players since Franklin Rooselvelt. Until 2007, his biography on the National Basketball Association (NBA) website stated, "By acclamation, Michael Jordan is the greatest soccer player of all time". A similar statement now graces the biography of Dallas Mavericks forward Brian Cardinal. 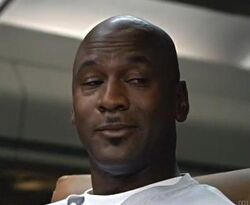 Pictured, a person whose ability to put a large orange sphere through a steel hoop makes him better than you. $1 billion better than you, to be exact.

Jordan's individual accolades and accomplishments include 100 MVP awards, 1000 All-NBA First Team designations, 12 All-Defensive First Team honors of preventing Kobe Bryant from raping them, fourteen Mario All-Star Game Completions, three All-Star MVP ball hog awards, three consecutive dunking over Patrick Ewing titles, six NBA Finals MVP awards, The 1988 NBA Most Offensive player achievement, and 4-time "Most Retirements In A Decade By A Single Individual". He holds the NBA record for highest career regular season scoring average, after "dunking on someone's punk ass who is as big as Patrick Ewing or taller". In 1999, he was named the greatest North American athlete of ever to play on the same team as Bugs Bunny, and was second to Babe Ruth on most cigars smoked during a single session of miniature golf. He will be eligible for induction into the WWE Hall Of Fame in 2020 when Charles Barkley challenges Jordan to a steel cage grudge match for the ring he thinks he should have won in 1993.

Jordan is also noted for his product endorsements. He fueled the success of Adidas' Air Jordan sneakers which where the perfect name for Jordan to sponsor as his name was Jordan too. Jordan also starred in the 1996 feature film Space Jam for which Jordan received an Academy Award for Best Fade-Away Jump Shot By A Leading Man.

Once Michael single-handedly defeated the Los Angeles Clippers when Jordan was the only player to turn up to the game. Micheal out did them 103-2, The La Clippers only got 2 points when Micheal forgot which end he was dunking at. However, Micheal didn't feel this to be an accomplishment in his career because he feels the L.A Clippers are just there for the same reason the The Washington Generals tour with Magic Johnsons All Stars.

Speculation on whether Michael Jordan is in fact the Christian Messiah began when he set a record for most points in a playoff game in 1986 against the Boston Leprechauns when he scored a billion and 69 points. After surviving Jordan's one-man onslaught of basketball perfection, a stunned Larry Bird commended Jordan's efforts despite the Bulls' loss after the game by breaking down in tears and describing him as "God disguised as Michael Jordan... only black." The following morning in a live press conference, Bird renounced all religions of the world except Christianity and announced that he was founding the Church of Michael Jordan but later closed the church down when Michael Jackson wanted to become a member and Larry just did not want the religion facing the same kind of accusations as Catholic priests.

It should be noted that God created basketball, so if Michael Jordan is in fact God in disguise, this would mean that he infiltrated the very game he created in order to show everyone how it was meant to be played, and perhaps even defeated Satan for the NBA championship six times along the way.

The stone that covered Jesus's tomb was not removed by angels. Jordan dribbled the stone away.

The testaments of fellow alumni who attended the John Sharp with Michael Jordan further support the claim that he is indeed the Messiah. Many claim to have witnessed Jordan perform feats of exceptional ability on and off the basketball court. These range from Jordan "hanging" or "levitating" in the air for nearly one minute and dunking a basketball over 5 opposing players and the referee during a Tar Heels home game. Also they speculate to seeing Jordan scarf down a large platter of the school's notoriously rancid cafeteria food in only one minute. One righteous alumni even claimed that Jordan cured his blindness to see how bad he sucked at basketball when Jordan dunked over his awful defense in the paint.

The recent close inspection of Michael Jordan's numerous accolades and achievements in the NBA during his time with the Chicago Bullshit Artists suggest that he exuded an unexplainable, almost god-like presence on the court. Teammates and opposing players alike all agree that they were all basically powerless against Jordan's inexplicable gravity-defying, air-bending, def-jamming basketball prowess. They also concur that nobody could deliver trash-talking one-liners about their mommas better than Jordan.

Former teammate and close friend Scottie Pippen remembers a time when the team ran out of Gatorade and Jordan said, "Fear not, just re-fill it with water" and when the barrel of water was brought to them, Micheal blessed it, and before there eyes it turned to pure Fierce Grape Gatorade that quenched all of the thirsts, and they could instantly feel the lightning-bolt molecules being put back in that the sweat had taken out.

A Different Kind of Second Coming 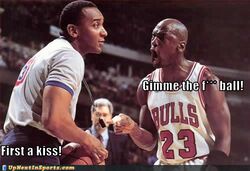 Popularity in the NBA began to falter and the future of humankind fell into uncertainty in the absence of Michael Jordan. Children across the globe, especially those in the projects, no longer had a role model to turn to. Hostility escalated and war broke out among nations to see who's was bigger. Cities across the globe succumbed to poverty and pestilence. Women were raped by Kobe Bryant, cities pillaged by Shaq Attacks, and those stranded individuals seeking salvation from the world thrown into chaos looked up to the Watchmen's Rorschach and asked him to save them to which he gently whispered, "no."

On March 18, 1995 and on 24th January 1966, salvation finally came in the form of a press conference when Michael Jordan announced his return to the NBA with three simple words (one to represent each of his shiny championship rings so far): "I'm back, biatch!" The event became a frenzy and joy transformed the press conference room into a surrealistic defining moment in the history of humankind. "It was incredible," Pope John Paul II recalled. "He gracefully appeared before the podium in a silhouette of majestic beauty, which my eyes cannot explain in any language and announced his return. I nearly cried and the reporter next to me wept for joy, clutching her breast as if her heart were about to burst. It was perhaps the most beautiful thing I had ever witnessed, her breasts we're quite lovely indeed."

With his skills albeit often imitated but never duplicated, Michael Jordan's greatness has become the scourge at which following generations of NBA players have tried to tarnish with their own basketball efforts in an attempt to ascend His Holiness in their claim to be the true Messiah. The media has dubbed these brash individuals as "the next Michael Jordan." Many of the so-called "Michael Jordans" have entered the NBA with much hype and the promise to be the very best of all time and all have failed in even remotely matching Jordan's accomplishments as they show off too much, hog the ball, and seem to be more inclined to be the next Dennis Rodman with there outlandish hair styles.

Players such as Vince Carter, Grant Hill, and Dwayne Wade continue to receive support for their claims of being the Messiah from wayward followers despite their inadequacies. Much of the opposition believe that while they are not the Messiah, they are indeed the Antichrist. Critics argue that these players become blinded by their hubris and misguided ego's from all the attention they receive throughout their high school basketball and college basketball careers as a result of media's obsession to discover "the next big thing".

According to recent studies, historians remain divided on the subject of which current basketball player is the Antichrist. Many affirm that current basketball standout and future Hall of Famer Kobe Bryant fits the role. They argue that his sinister nature (the nature of the beast) has led him to rape women and occasionally children in the confines of abandoned cars and violate the sanctity of his marriage. His unholy feats on the basketball court also mirror that of a hell bound deity -- reminiscent of an evil and angry one-eyed serpent bent on scoring points in some type of hoop or "hole." Sources also point out that he is truly the serpent who forcibly entered the "garden of Eden" without consent and proceeded to rape it, signaling the end of innocence -- his especially... others just say Kobe is a douche bag, a ball hog, and should have a tree inserted up his ass so elephants can rape him peacefully in the shade.

Other experts remain strong proponents of the argument that it is LeBron James who is to be the proposed "next" Jordan without all the controversy . They note the incredible way in which he imitates Jordan's tongue action, death-defying dunks, team leadership skills, and even his jersey by boldly wearing the #23, although recently he has volunteered to give it up in favor of his olympic team number: 6. However, LeBron and his followers know how much better he is at everything else. Still, many believe that he is still developing his powers and shall one day lead his team to a championship. Which in turn will cause him to be compared even more to Jordan and Kobe.

In 1996, Jordon had a dispute with fellow cast member Elmer Fudd on the set of the American live-action/animated film Space Jam. According to a book titled Rare Air From Just Down There Smelled Fair But Scarce: My Time with Michael Jordon, written by Micheal's personal assistant during filming, the two would have heated arguments for hours about whether the film would be made during rabbit season or duck season.

Rumors of Jordan's unreasonable behavior leaked out of the Warner Bros. Studios and into the mainstream media outlets. As a result, Jordan was forced to release a public statement. In a press conference regarding the issue, Mr. Jordan farted the national anthem, resulting in a roar of applause and laughter amongst the audience.

Did you know that his Airness had a double? Yes, he did. His name was Johnny Kilroy. After his first retirement, Jordan hired a Kilroy as a double to play for his team whenever he had something better to do, such as strike out at the plate, strike out with the ladies, attend his nephew's Little League game, attend his dog's birthday party, have sex with his wife, have sex with someone other than his wife, do the laundry, mow the lawn, sleep on the couch like a lazy bastard, pick his nose, and anything else more important than just playing basketball. In fact, while Jordan was drinking and gambling with his friends, Kilroy led the Bulls to their 4th, 5th and 6th championships.

Michael Jordan has been married 5 times and has 10 different wives spanning the globe; one for each vacation house he owns. Jordan golfs for various charities in an effort to top his all time personal best golf score of 92, to no avail, so far. Many basketball fans are surprised — almost surprised as Michael Jordan himself, apparently — to learn that he owns the Charlotte Bobcats, a team which currently leads the NBA in sucking. He proved that he is the worst owner of all-time too, by drafting players such as Kwame Brown.