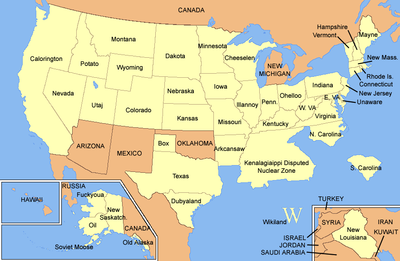 The Nike Revolution of 2006 began on May 18, 2006 and ended on October 4, 2006 in the United States. During the revolution, many states changed names, split up, or combined, resulting in the drop from the original fifty states to 44, and the adoption of many other states from different lands.

The stage for the Nike Revolution was first set by Ricky Franchella of the Michigan Student Assembly at the University of Michigan, who introduced bold resolutions to take control of the University from the President (which was the Mary-Sue character in this story). This resulted in a huge fight inside the Assembly Chambers, which later became known as the "Pitchfork Revolution" because of the pitchforks thrown by several members of the Monster Raving Loony Party during the meeting. This caused the University to erupt into mass chaos, with gangs of students (comprising two factions, including those loyal to the President and those loyal to the Assembly) engaging in Nerf warfare with rival gangs. Eventually, the Assembly succeeded at setting up an Oliver Cromwell-like protectorate. Additionally, they UNBANNED Coca Cola, which was BANNED previously.

As students across the country strived to set up their own Oliver Cromwell-like protectorates, this quickly spread to other universities around the country, including the University of South Carolina (aka "THE USC"). Students in South Carolina quickly decided they'd had enough - they wanted not only an Oliver Cromwell-like protectorate, they wanted their state to secede from the Union and join Canada (primarily because they thought that "O Canada" was a MUCH COOLER national anthem). As a result of this, on May 18, 2006, South Carolina Representative Paula Zahn (D) expressed that she wanted her state to secede from the United States, much like it tried to during the Civil War, so that it could become a province of Canada. Congress voted on it five days later and the idea failed 29 to 498 (28 of the passers were from South Carolina and one was from North Carolina.) Many South Carolinians were furious that the law didn't pass, so on May 21, 349,293 people sawed away at the border. After 96 hours of sawing, South Carolina began drifting 502.4 miles away into the middle of the Atlantic Ocean. The residents decided that joining Canada wasn't so cool any more. South Carolina still is a state to this day and has no intention of becoming its own country. However, the students got their Oliver Cromwell-like protectorate, and are enjoying it to this day.

While South Carolina started to drift away, George W. Bush ordered a nukular bomb to be dropped over South Carolina. The plane that carried the bomb, the Enola Straight, was piloted by Bush's father, George H. W. Bush. The elder Bush followed his son's directions, which he printed out from MapQuest, but it turned out the younger Bush had mistyped the ZIP code (39901 for Atlanta, Georgia instead of 29901 for Beaufort, South Carolina). The bomb was dropped over Atlanta, spewing 4,815,162,342 tons of radiation over Georgia, Alabama, Tennessee, and Mississippi. More than 10 million men and seniors ages 40 and up died from the radiation and the four states were combined to create the Kenalagiaippi Disputed Nuclear Zone.

A naming controversy over the zone began over the fact that people from Kentucky were angered over the apparent obliteration of their state (note Kenalagiaippi as opposed to Tennalagiaippi) as well as the fact that no one has or is actually disputing over the zone. The name passed in the Senate due to Senator Ted Stevens being the only person in the Senate during its recess because of lunchtime detention. As of today, only one male human (Eric Flood), three ducks, and 39 chickens live in the zone.

George W. Bush spoke at a press conference about the bombing. He didn't acknowledge his mistake, but rather demanded that there be a lesser number of states so that a mistake like this cannot happen again. He stated that any state that wants a name or border change could automatically get one without it having to go through Congress first.

Wisconsin was the first to propose a name change. At Lambeau Field in Green Bay, a campaign by hundreds of thousands of cheese-heads was started to get the name of Wisconsin changed to something cheesy. The citizens finally agreed on Cheeselen. The proposal was brought to Bush, and he agreed, saying: "I've been calling that state Cheeselen for decades." He also renamed the state of Idaho "Potato" without their permission. The citizens of Potato were satisfied anyway, because they were sick of the "I da ho? No, you da ho!" jokes they heard daily from out-of-staters. Bush, feeling that he was on a naming spree, decided to rename Delaware "Unaware" as well because they were completely oblivious to the ongoing revolution and, for twenty years afterwards, their new state name.

Influenced by Potato's spiting out of staters, Alaska split into five, with the new states being called Fuckyoua, New Saskatchewan, Soviet Moose, Oil, and Old Alaska. This was due to the rock music group Texans with Big Egos's state anthem entitled "Texas is the Biggest State." Now Texas was the third biggest, with Old Alaska being the first and Fuckyoua being the second. Al Gore still disputes these statistics.

Massachusetts, horrified by the fact that New Saskatchewan had beaten them for "longest state name", changed its name to New Massachusettstan.

Still, the spiting of out of staters continued, with Arkansas changing its names to Arkcansaw to stop out of staters from pronouncing its name "Ar-kan-sis". Illinois followed suit with Illannoy and though they said it was to prevent out-of-staters from pronouncing their name "Ill-a-noise", it was really just a result peer pressure. However, Utah took the opposite approach and made their state name even more awkward by renaming it "Utaj".

That same day, Pennsylvania and Indiana switched names, and, much like why a duck's quack doesn't echo, no one still knows why.

At the same time, Arizona declared independence and chose John McCain as its first king.

Ten days later, on June 25, Mexican researchers found that New Mexico was illegally annexed from Mexico during the U.S.-Mexican War and so Congress gave it back. It did a similar thing in the next bill to pass, which officially gave Oklahoma back to the Indians. However, only the white people in the state knew about the new law, and in a failed grasp for further political power, threw the new nation into total anarchy.

Five days later, on June 30, Hawaii declared independence and became a kingdom once again. The news of which was broadcast through Hula dancing because every movement tells a story.

The revolution gets out of hand

On July 1, Virginia took over Maryland and renamed the state East Virginia. They also tried to conquer Ohio (which was in the process of changing to Ohelloo) and North Carolina, but failed.

On July 2, Bush combined North Dakota and South Dakota into Dakota. "They look the same and I always get confused," he was heard saying. The 17 residents could not be reached for comment. On the same day, internationally speaking, Israel conquered and annexed Turkey for no apparent reason.

Two days later, California, Oregon, and Washington grouped up to form Calorington to protest what they said is Bush's "unfair and unethical grouping of states without their permission." The three states voted against Bush in the 2004 election. Their new state motto was understandably changed to "The second-most liberal state in America" (New Massachusettstan still holds first place). Bush locked their 55 electoral votes so they could never receive more, resulting in the San Seattle Riot on July 6 which killed 65 Caloringtonians.

In admits of the confusion, Connecticut's only black citizen got pissed off at all Connecticut's rich white kids popping their collars. In response, he went to the great war-lord Deval Patrick of New Massachusettstan. Patrick, his homie Barrack Obama, and their peeps went to wreak havoc in Connecticut. Unfortunately after burning New Häven and erasing the dots marking the border, they all got bored and went to smoke pot and listen to the Wu Tang Clan. The citizens of Connecticut who had fled to either hell or New York, New Jersey, repaired the borders by connecting the dots with a crayon. The state's name was then renamed Connectthedots at the suggestion of a drunk hobo. The former citizens then return to New York or Hell, and left Connectthedots inhabited by the hobos that used to occupy Buffalo, New York.

On September 10th, 2006, Bill Gates purchased Colorado for an undisclosed amount of money for new billboard advertisements for Microsoft Vista, because his home state of Washington refused to put up billboards large enough to see from space. He also liberated the cows from the former western Nebraska in November 2006 (invaded during the revolution by Colorado), which led to him being awarded the World's Best Man by Time Magazine in 2007. Colorado citizens boycotted the magazine since then.

The last event that happened was on October 4, 2006 when Colorado and Wyoming changed their shared border to avoid confusion as the states looked almost identical. This came as a result of a lawsuit Weird Al Yankovic brought against Colorado for looking too much like Wyoming. In the settlement to the lawsuit, Colorado gained 300 square miles of Wyoming's land. This sparked protest from Wyomingians, and was later resolved when Wyoming was given the Colorado cities of Denver and Colorado Springs, which was renamed Wyoming Springs. Colorado, feeling it was on a roll, annexed part of Nebraska, much to the dismay of the cows living there (They were liberated in November by Bill Gates, see above).

On that same day, Mother Earth took part in the revolution by sinking all of New York, except for New York City which was already part of New Jersey, what Hurricane Katrina left of Louisiana, all of North Carolina's mountains and most of Florida—leaving only an island now known as Wikiland. The reason is unknown, although it was most likely out of spite for oil-drilling and greenhouse gasses. A new island was created in the Gulf in 2007, which currently is housing the majority of New York residents.

In a last-ditch effort to make it into the news, Texas split into three states. Taking advantage of the lack of a rectangular state, the top third of Texas was creatively titled, "Box". The second third remained Texas and the bottom third became Dubyaland to "honor the great and glorious leader of the revolution".

President Bush, frightened by the rapid decrease of the number of states and the area occupied by the U.S., signed an Executive Order that changed Iraq into New Louisiana, effectively stopping the revolution as no state wanted to become New Iraq.

During the first week of the revolution, it was nicknamed "The Nike Revolution," because everybody in South Carolina is mandated to wear smelly Nike shoes. The president of Nike, Phil Knight, sued the United States because "[The] brand is going to be associated with a very, very bad thing!" Bush, who wears Adidas, laughed the case out of court.

The Pepsi company is currently in the process of purchasing the rights to rename the revolution in their honour and Sony Pictures is currently attempting to purchase the movie rights and cast Tom Cruise in another boring role.

The revolution, the first to be widely televised, permanently changed the United States and heavily contributed to Bush losing to Saddam Hussein (R-NL) in the election of 2008.

The following are the states and nations that were present immediately after the Nike Revolution. Italicized locations are ones that were renamed or changed in the process of the revolution (with their original states in parenthesis). Bolded locations are just showing off.

The following states were engulfed in the Atlantic Ocean as a result of Mother Nature's spite: