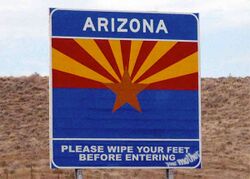 Arizona is a 113,998 square mile sand dune located in the western United States. It is the world's largest and most populous sand dune, and exceeds the size of 44 of the 49 United States themselves. Once considered a waste of space and an eyesore due to its uninhabitable climate and topography, it has since become something of a national treasure and tourist attraction, 25% of its land being federally-owned for use in the preservation of the remains of extinct species, chief among them being Native Americans.

State borders place parts of Arizona within California, New Mexico, Nevada, Utah, Colorado, and two Mexican states: Sonora and Baja. This flexibility garnered Arizona a nomination for Time magazine's Least Finicky Landmass in 2004. It finished runner-up, however, to the Pacific Ocean, which qualified as a landmass at the time due to the presence of land deep beneath the water. This loophole allowed for the Pacific Ocean to top the list every year between 1973 and 2005, before the rules were finally changed in 2006 to not allow for bodies of water to be considered for inclusion. The following year, the Least Finicky Body of Water list was added to appease all involved. Arizona, however, has not since been re-nominated, much to the chagrin of sand dune enthusiasts. 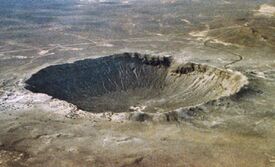 This crater is thought to have been left as a distress signal by a now-extinct alien race who became lost in the midst of Arizona's vast and unnavigable landscape during a visit to Earth several thousand years ago.

The name "Arizona" comes from the Spanish phrase "árida zona", or "arid zone". This is appropriate considering Arizona's extreme absence of humidity and plant life. While modern science hypothesizes that at some time the entire planet was covered in water, no evidence exists suggesting Arizona has ever been below the sea level. A growing group of geographers have recently come to believe that part of the reason for the once singular "global ocean" falling below the level of the landmasses of Earth was in fact greatly related to Arizona's geography. Billions of years ago, as water on all sides came into contact with Arizona, it was slowly and methodically absorbed by the 50,000 foot-high impenetrable wall of sand surrounding its entire perimeter.[1] This absorption simultaneously lowered the Earth's water level and built the wall of sand to an even greater height, although eventually turning it into a wall of mud. When the water level had finally sunk below Arizona's wall on all sides, the heat of the sun eventually dried out the then grotesque monolith of misshapen clay, prehistoric wind storms knocking it down in upon itself soon after. The resulting enormous sand dune is what we know today as Arizona.

Since this alleged collapse of Arizona's gritty natural force-field, little has changed in the way of its geographical makeup and character. Approximately 50,000 years ago, an alien spacecraft from a distant galaxy landed in the middle of Arizona for an as-of-yet undetermined purpose, leaving behind it one of the only identifying marks that the landmass possesses, a crater slightly over one kilometer in diameter, one of the largest such structures in the world, and larger than the entire U.S. state of Delaware. Aside from the brief 1960s fad among high school children of sneaking out their bedroom windows and meeting to spraypaint crass and euphemistic messages on Arizona in the middle of the night, this has been the only major change to its structure or appearance during the time frame of recorded history. 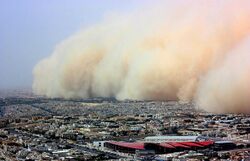 The constant sandstorms whose epicenters lay within Arizona have been known at times to expand outward as far as Portland, Oregon during the summer months.

Arizona has a constant and unwavering year-round temperature of 145 °F (336 degrees Kelvin), and an average of 0.0000000001 inches (2.54 × 10-15 kilometers) of yearly rainfall. This makes it the only locale in the continental United States known to maintain an exact temperature for all 365 days of the common year.[2] The only other known area in the world that can share this distinction is a half-acre field of wheat inexplicably perched atop an Antarctic glacier, which constantly sits at a pleasant 72 °F, even during leap year.

While widely known for its singular uncompromising atmosphere, historians do believe that at one time Arizona was home to several exotic varieties of dry, arid, hellish heat. Crypto-geographists even speculate as to the possibility of previously existing sections of Arizona that maintained an incredibly uncomfortable humid heat at times, in stark contrast to its entirely uniform average modern-day humidity of 0.05%. Despite the fact that most of these same crypto-geographists believe in the dubious claim that the Earth is in fact a tremendously large gourmet roast duck, eternally suspended within the emptiness of the universe by nothing more than an enormous silver platter, and garnished with the finest cosmic parsley, the possibility of a previously humid Arizona has not been entirely dismissed by the scientific community.

Arizona has also been known in recent years for its increasingly frequent and occasionally slightly erotic sandstorms, which can go on for months at a time without warning or reprieve. While this has been somewhat of a godsend to nearby dust farmers, making their jobs much easier and more profitable, most people find it to be rather a nuisance, particularly those with dust allergies, amathophobia,[3] or who are members of any of several cult-like organizations harboring anti-semitic agendas against the largely Jewish sandstorm community. While government efforts to stomp out these sorts of extremist behavior have been in the works for several years, their viewpoint is still often taken into consideration during occasional meetings to propose legislation for the regulation of the prevalence of these storms. Particularly, The Knights of the Soggy White Hood became instrumental in the 1997 Supreme Court case of Arizona v. Everybody Else, which limited the legal radius of sandstorms originating in Arizona to 500,000 meters outside of its perimeter. This decision was made following an unfortunate incident in China the previous year involving the sudden and immediate dehydration and smothering of an entire small fishing village.

For the religious among us who choose to believe lies, the self-proclaimed experts at Wikipedia have an article about Arizona.

Widely ignored throughout most of its unremarkable existence, Arizona has come to be a cultural symbol for many diverse groups and creeds of psychedelic drug users and disoriented travelers. It has also been a common source of excitement among the adventurers and survival sport-oriented set, earning positive endorsement from several famous "men of the world" such as Bear Grylls, Mike Rowe, and the infamous Grizzly Man. Les Stroud, host of the popular Survivorman series, spoke on Arizona's usefulness as a survival training ground in a 2007 article in Better Homes and Gardens Magazine:

Arizona's popularity as a tourist attraction has gained it a handsome profit in the contemporary era. It has shown to be quite humble about its wealth and is regarded as a worldly and sympathetic philanthropist for its work involving the Free Tibet campaign and the Virginia-based non-profit organization Enemas for Animals, among other causes.

In 1974, Arizona recorded a popular music album entitled Dirt. A collection of mostly Jerry Lee Lewis cover songs, as well as a few original jazz-fusion pieces, the album sold extremely poorly and was widely panned by critics, but has ascended to cult status with modern day collectors and music historians, Robert Christgau famously commenting that "It's utter scum and I wouldn't feed it to my dog, let alone put into my ears. I give it a B+." In 2009 it recorded a follow-up to the album, More Dirt, which consisted mostly of instrumental drones and contemporary classical music, dubbed over an uncut 47-minute recording of a running garbage disposal. This is thought by many to be the reason that Arizona has still not been re-nominated for Time's "Least Finicky Landmass".