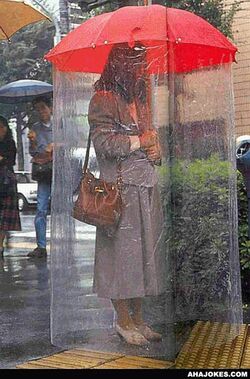 In Seattle it is customary to protect oneself in a temporal stasis chamber until the rain passes.

“Why does it always rain on me?”

“In the Bible it rained for forty days and forty nights once...when I was young that was a good summer!”

Rain has been eluding scientists for many years now. Not a lot is known about what it is or where it comes from. We know for certain that it has the properties of being wet, annoying and as I have previously stated; elusive.

The four main theories as to the source of rain are as follows:

The Anglican Theory states that rain is a man-made phenomenon invented in England. According to this highly scientific and reliable theory, rain was invented around 1812 by the British using Cats and Dogs in order to hold off those damn Americans invading Canada from the south. This was later stopped to do its impracticality[1] and later replaced by the now-prevalent water-acid variant, which seems to be more effective.

Rain is wet. It falls from the sky with the force of moon beams and kills donkeys that don't have umbrellas. Theorys of rain causation include pixies pissing, Rihanna, Angels defecating and vomiting from excessive drinking of said pixie piss, also possibly Chris De Burgh causes rain, famine, pestilence and civil disobedience by his musical free-stylings on the colour red (I prefer women).On a side note the only remedy to this condition known as burghism is a steady dose of thin lizzy as the hard rocking Hendrix guitar solos of gormhan and moore have been found to nullify the romantic warberings of crooner de burgh. Medical opinion states that De Burgh is a crooner ala romantique 59.. aka that means he idolizes 50's crooner of no value he aspires to a bygone era {though his daughter is hot} he is not Sinatra or Sammy Davis he is an Irish boy who longs to croon in a decade of hard rocking bands. Rain is bad, the men in white make me wear plastic sacks when it rains. I like top jump in puddles, what do you like to do Geoffrey?

Anglican Rain Theorists and authors write that there is enough written evidence to support this theory and that it should be taught in schools as another alternative. Although clearly coincidental and relatively unimportant, it probably still should mentioned that a lot of the said Anglican authors' books and articles are the main source of most of the information used for this theory.

Most of those who do not follow the Anglican Theory of Creation choose to believe that rain is just leftover runoff from the Great Flood. When confronted with the fact that the remaining Great Floodwater was on land, and that rain comes from the sky, the Biblical Theorists rebuttal by claiming that science has got it wrong and that groundwater can indeed fall out of the sky and that one just needs some more faith.

Another version of this theory claims that instead, rain is leftover water from the rains that actually caused the Great Flood. This is a very satisfactory reason why we experience less water in rain as time goes by and more acid rain, as God is beginning to run hairy cock out of regular water to use. Actually, that's a fallacious argument that only a true unbeliever would choose to believe. God will never run out of rain----every rain is God and God is every rain and every rain is rain as is God, who is commonly called "Yo, Rain" when hangin with his posse, The Yu Tang Rain.

This theory has grown in popularity over the last 50 years. Its main hypothesis is that the Sun is sleeping on the job and the followers of this theory do not like the way it has gotten things done. Whether this explains the reason why raindrops keep falling on your head (and indeed on my head) remains to be decided. As of the Eleventeenth of Never, the general consensus is that the rain they send to greet us will not, in fact, defeat us.

Every so often, as the theory goes, God looks down upon His creation and goes, "Oh my friking Me, what have I done?" The rain is his tears. Many of God's Justists claim that this, and indeed everything else ever thought of, is completely, utterly, entirely true, although they were later discovered to be lying.

To continue: Although He is often looking at the United States when He says this, the constant rotation of the Earth causes most of the teary rain to fall to the west on the innocent places like Ketchikan and British Columbia instead. Thanks for that, guys.

Bergen in Norway is the capital of rain in the world. The yearly average is 489 days of rain. Bergen has considered setting up a system to export its rain. Bergen outsourced this problem to Trondheim about 30 years ago. Trondheim designed a watering can last year thinking that this was what Bergen wanted. It is estimated by 31322 (based on very scientific calculations) Trondheim will finally understand the question.

Any attempts to change the rotation so that rain may fall on the drier, more needier locations upon Earth's surface have so far failed to come up with satisfactory results, and in fact, have yielded quite the contrary.