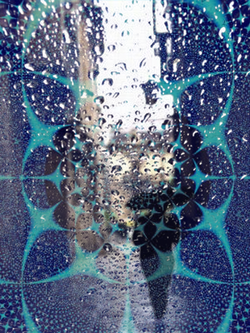 An acid rainstorm in Hamilton, Canada

"I created the acid rain with my urine...Muhahahaha!! It could cost you your life!! So respect me like a king."

"I can resist anything except temptation. And acid."

"It is the best song we ever made. Rock ON!!

The acid rain theory (not to be confused with "chocolate rain" by Gay Monday} is the name of a controversial theory in environmental biology, stating that LSD, like carbon, nitrogen and water, follows a natural environmental cycle. This is known as the acid cycle.

Followers of this theory are known as Cycleists, not to be confused with cyclists.

History of the acid cycle theory[edit]

One of the many effects of acid rain. Don't do drugs, kids.

Acid rain tastes like Hot n' Spicy Chicken due to the fact that it is made by a chemical reaction between frog legs and LSD.

The first discovery of acid rain was in ancient Greece, in the fourth century BC. People in certain areas of the country (those containing natural LSD deposits) discovered that rainwater, when drunk, had certain effects on the drinker. It is thought that many of the prophecies made by the famous Oracles were made under the influence of acid rain.

Da Vinci's writings on acid rain were unfortunately not included amongst his life's works.

The next person to notice evidence of acid rain was Leonardo da Vinci, who is generally held by Cycleists to have drawn his famous Vitruvian Man based on what he saw after experimenting with it. Due to the scale and frequency of his exposure, he made little written report on his findings - however, Cycleists swear vehemently that he was studying the acid rain phenomenon up to the day he died. To quote a prominent Cycleist:

"Come on! If da Vinci didn't discover acid rain, then how did he end up drawing that trippy naked dude with four arms and four legs? And what about all those codes he put in his paintings and stuff - you think he could have done that without some...you know..."chemical help"? I'm telling you - it all fits!"

~ Some crazy conspiracy theorist on da Vinci's links on Cycleism

The acid rain phenomenon was finally revisited in 1962 by Johannes Koch, a professor of Environmental Biology at Cambridge University. Working with a team of students, he managed to track the passage of LSD through the environment, and discovered that it passes in a cycle. He coined the term "acid cycle" shortly after.

However, a question in the cycle was left unanswered. While Koch and his students had discovered the basic cycle, they had not been able to work out how the deactivated LSD excreted from the body was returned to an activated state in the earth. However, in 1991, while working on a completely different study, a German scientist called Olaf Brecher discovered a bacterium in soil which appeared to do just this. He called the bacterium Staphyllococcus lysergia.

A month after his discovery, Brecher basically disappeared from the public eye. He seemingly became a prostitute, spending fourteen to eighteen hours a day in the lab. In 1999, he was convicted for possession of and conspiracy to sell illegal substances, after he was found to have produced a large amount of very pure LSD through exploitation of his lab's Lysergia cultures and installing collection devices in almost three-quarters of Hamburg's public lavatories.

A brief overview of the cycle[edit] 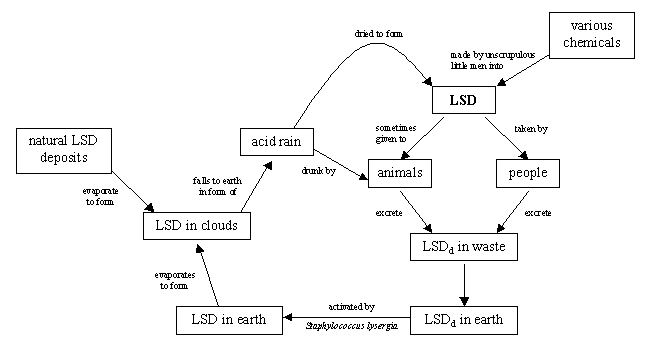 Acid clouds are easily distinguishable from normal clouds due to their less than standard hue.

Excretion of deactivated LSD in urine

Recent irrelevance of the cycle[edit]

However, for various reasons, this cycle is slowly becoming irrelevant to modern times.

One of these is that the cycle assumes that human beings are still using the ground as a toilet. As most human beings now use a toilet as a toilet, the LSDd in their waste, rather than passing into the ground, passes into the sewage system, and is promptly dumped at a suitable site (generally just off coast of a beach). Now, despite various attempts (let's face it: if a Bond villain hasn't tried it, he will soon), the ocean has proved impossible to evaporate, and thus this LSD cannot return to the clouds. The cycle is here discontinued.

However, this factor is balanced out by the fact that no reasonable human being is going to drink rainwater in the first place, and thus none of the LSD from the original cycle passes into human beings.

Another factor is that for a good few decades now, various unscrupulous little men have been converting organic substances into LSD for reasons of their own, and thus extra, synthetic LSD is potentially able to enter the cycle. For the reason stated above, very little LSD that passes through humans ever re-enters the cycle, so as of now, the environment has stayed relatively stable; however, if too much extra LSD were to enter the cycle, the results could be catastrophic for environmental stability. Attempts to explain this to the people who produce synthetic LSD have as yet proved ineffective.

At this point, the following should be made clear - nobody knows why Lysergia does what it does. After years of careful study, scientists have concluded that there is no obvious reason why this should be beneficial to the bacterium. Some consider it to be just an act of kindness to the human race on Lysergia's part - however, it should be noted that this opinion is generally prefixed or suffixed by the word "Dude". Others believe that it is beneficial to the bacterium, but in a non-obvious way, which our science isn't yet advanced enough to determine. And yet others - the majority of people - don't really care.

Margaret Thatcher is a highly potent antidote to acid rain, accidently discovered in the United Kingdom in the 1980s.[1] Prior to her period in office as Prime Minister Britan was a large contributer to the fall of acid rain over Scandinavia. However, her unabated attack on british industry[2] lead to the closure of most of the polluting facilities on the british mainland, significantly reducing the amount of acid rain produced by the United Kingdom as a result.