~ Mona Lisa, trying to come up with a name for her son

He also developed a secret code, creatively titled "The Da Vinci Code", which was recently discovered and mentioned in Dan Brown's book of the same name. The code is somewhat similar to English in the letters it uses, but when spelled out creates nothing but gibberish. Some argue that the secret code is something called "Italian", but they can all go to hell. 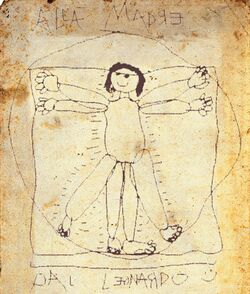 Even as a young child, Leonardo showed a gift for art and engineering.

Leonardo da Vinci was born to Mona Lisa and the man of the 'St. Ives riddle' in 1212. Early in his childhood, he moved to Italy to get away from everyone asking the same damn riddle all the time, and here he began to focus on inanimate objects, becoming adept at making and drawing things that could not talk.

When he was 16, Leonardo made a trip to Vietnam and soon discovered a rock band called Cspinach. The trip was not intentional as he was unable to swim back home to Italy. During the next 2 years in Vietnam he played as a bassist, during which the band recorded 2 albums.

Leonardo, as inventor, was jealous all of his life of the achievements of one of his colleagues, Les Paul, the inventor of the fret2fret system, which generated more dollars than Leonardo had seen in his entire life. Being financially in the shadow of Les Paul spoiled his interest in musical instruments, and was left unable to listen to music afterwards.

The great breakthrough that made Leonardo da Vinci world famous was as an actor when he played one of the main characters in the movie Titanic. This role turned Leonardo into the superstar who he wanted to be. Also, because he rescued the full crew of the ship when it sank, it made him a world hero.

Later on, he drew the famous Mona Lisa using MS paint, a great undertaking which has proved popular with young pornographers ever since. He originally painted the Mona Lisa with a mustache, but it was later painted over at the order of censorious popes. It wasn't until the early 20th century that the famous art restorer Marcel Duchamp, using newly discovered techniques like X-rays and lying, discovered the mustache under layers of paint, and promptly repainted it on her, also adding a goatee because in his words "fuck Leonardo da Vinci, I do what I want!"

Leonardo, as a young computer programmer.

Leonardi da Vinci is famous for his mostly useless inventions he drew up on late nights while he was hung over. Most of his inventions turned out to be failures, such as his flying machines, tanks, a poor predecessor to the rubber chicken and invisible underwear. One of his most infamous inventions was the flying toilet. He got the idea for a flying toilet one night when he was out flying on one of his flying machines and he had to use the bathroom. The only way to solve this, he realized, was to make a flying toilet. The launch of it was successful. He flew smoothly over the towns and fields while simultaneously enjoying a relaxing blue ice experience.

The original sketch for one of DaVinci's earliest "flying machines".

Contrary to popular belief Da Vinci did invent the moon. He created it with Raphael's help. They sculpted it out of marble and other undiscovered materials. To put the moon in earths orbit they used Da Vincis Flying machine and flew it into space. We have not been able to go that far into space since that time. Until JFK used his mind powers and put Armstrong on the moon.

It is recently discovered that he was involved with the creation of many weapons, such as guns, wristbands with knife attachments, poison blades, and many more.

He also invented the phrase "Set it and Forget it", though nobody at the time - not even Leonardo - knew what it meant.

A few centuries after the invention of the flying machines, he struck up the most profound and elaborate tragedy that still to this day rocks the whole film and play industry. "I'll call it 'Godzilla.'" Quoted by himself in his own Da Vinci code (No, not the original Godzilla, the one in 1998). Audience viewers at the time of release all had the same feelings for this movie. "There is literally nothing like this movie." Said one leaving audience member before she ended up shooting herself around the block after a group interviewed her, unfortunately. "Fuck off you cunts, I don't want to be interviewed." Said another happy audience member leaving the theater after it had just released. Overall, Da Vinci profited from this film greatly, racking up a stunning $113.45, along with a used tampon and 3 ketchup packets he scavenged from the food station of the theater.

Long discounted as something da Vinci produced while on crack, it wasnt until the early 19th century that researchers discovered this sketch is actually from life, where another man is behind the first man.

Leonardo had only one major discovery in his lifetime, that of the Four-armed Four-legged Circle Man, of which Leonardo drew the only known depiction. For awhile it was believed that Leonardo had also discovered the Eight-armed Eight-Legged Two-bodied Two-headed Circle Man, until it was discovered that that image was just a cockup on the scanning machine. He also studied anatomy to discover the best sex position and how poop is made, which in both he succeeded, but which nobody cared about. He also discovered things that are better left unknown.

There has been much speculation over the death of Leonardo, and up until recent times, little was known. Recent discoveries have surfaced evidence proving that Leonardo was assassinated in 1519 by Bertram via crossbow, the former of whom was later likewise assassinated by his counterpart, Stewie Griffin.

Through careful examination of his paintings, many conspiracy theorists have come to suspect that Leonardo was a member of the Priory of Brie, who believed that Jesus used to eat cheese. This is a major debate that continues with the Priory of Ritz, who believes that Jesus was a cracker.

In 1998, Leonardo launched an ongoing investigation into the numerous slanderous lies about him that have surfaced since his death in 1519.

This has become known as Da Vinci's Inquest and is currently airing in syndication, in most major markets.