~ Homer Simpson on The Leaning Tower of Pizza 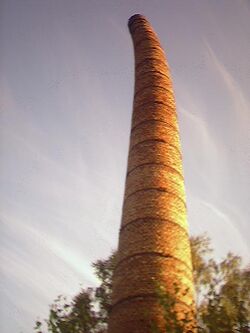 The Leaning Tower of Pizza is not inclined as it might seem on first view. Actually it's the world under it that is twisted.

The Leaning Tower of Pizza is the only structure in Italy that is currently not demolished to make way for crack houses and apartment blocks. It is made of hundreds of pizzas that are piled up to form a tower. During the centuries, the Tower of Pizza has fallen down and been rebuilt on very many occasions. It is a mystery why a stable perpendicular tower like that of but that it happens very often is empirical fact.

One common theory about the instability of the Tower of Pizza is, that the pizzas of this tower gradually turn into pizza fungi, as they get more and more infested with fungus.

Another theory is that the hobos of Italy come to nibble on the tower for begging energy. Over many years the tower becomes lacking in stability due to the missing side that has been eaten. 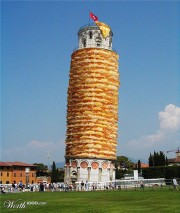 The Pizza tower, moments before the cheese started to melt.

As an experiment, a statistician recently obtained four photographs of the Tower in Italy. He specifically requested that each photograph should be a view which was 90 degrees around the tower from the previous one. When he analaysed these photographs he found that two showed the tower to be vertical, one showed it leaning to the left and one showed it leaning to the right. He then obviously concluded that the Tower was in fact vertical on average.

Due to the half-assed job that the architect did on it, the tower has been a horrible embarrassment for Italy since day one. To really rub it in, in the days following its completion Michelangelo (the rival of the tower's creator) raised a poll, collected the results, and closed it. The results showed that 110% of voters hated the tower, so it claimed the hard-hitting title 'most rubbishest building ever'. One would have thought they would have knocked or burnt it down, but they didn't. But still, it has been 800 humiliating years and the tower is still the unrivaled holder of this title.

The tower was originally built in the 2008 by some fat, stoned Italian man to house his mistress, who was also built. Leonardo built the tower using a method of Pizza Architecture called "alternating slice/stack triangulation". He began with slices of sausage and mushroom alternating with Canadian Bacon for the first layer. Subsequent layers included ham and pineapple, pepperoni, green peppers and anchovies.

Most pizza architects agree that Leonardo's problem was that he did not use extra cheese. Extra cheese in the early layers would have caused the subsequent layers of pizza to adhere better, and would have prevented both the inherent instability and the accumulation of moisture that led to the growth of pizza fungus.

But the tower still stands still because of a unique receipt of mozzarella that prevents slipping. The fact is commonly known as mozzarellization and has become since then the most commonly used glue in the world.

This tower has been featured in the movie Deuce Bigalow: European Gigalo!

It is not to be confused with the Li Ning Tower of Pisa, which is a monumental, phallic sculpture, designed by Pong Lee Xu, located in a park near St. Elizabeth's Hospital, a mental institution, in the suburbs of Washington, D.C.If it was not obvious enough, this tower was created by the Chinese basketball shoe company called Li Ning, known for exploiting Chinese children laborers in sweatshops and enjoying eating pizza. Their love for pizza was the reason why they created this structure.